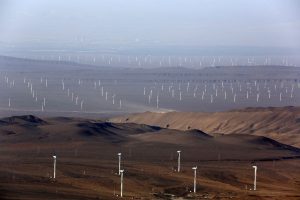 China Moves Forward Into Green Energy, While Trump’s US Dives Backwards Into Fossil Fuels — Soon US Will Blame China for Its OWN Mistakes

the “bogeyman” Chinese are taking a much more forward view on energy, whose global future is clearly green …

all pathetic little “tricks” that Trump is hoping will work …

Instead, the future will come from a number of as-yet unknown innovations in GREEN ENERGY …

And China, if it can solve some of its other serious problems, will be far ahead of the US in that area,

Once again, Americans do self-destructive things and blame the Chinese —

who, in this case, are doing nothing but observing the writing on the — polluted — Wall,

which demands a MASSIVE investment in Green Energy …

“China intends to spend more than $360 billion through 2020 on renewable power sources like solar and wind, the government’s energy agency said on Thursday.

The country’s National Energy Administration laid out a plan to dominate one of the world’s fastest-growing industries,

just at a time when the United States is set to take the opposite tack as Donald J. Trump, a climate-change doubter, prepares to assume the presidency.

The agency said in a statement that China would:

1) create more than 13 million jobs in the renewable energy sector by 2020,

3) reduce the amount of soot that in recent days has blanketed Beijing and other Chinese cities in a noxious cloud of smog.

The result is choking pollution and the growing recognition that China, many of whose biggest cities are on the coast, will be threatened by rising sea levels.

But even disregarding the threat of climate change, China’s announcement was a bold claim on leadership in the renewable energy industry,

where Chinese companies, buoyed by a huge domestic market, are already among the world’s dominant players.

Thanks in part to Chinese manufacturing, costs in the wind and solar industries are plummeting,

making them increasingly competitive with power generation from fossil fuels like coal and natural gas.”

So, you short-fingered vulgarian, do NOT blame China when they win a major sector of the world economy,

everyone, that is, except you and your crony friends like Putin and Rex Tillerson, among others …

China’s announcement was a bold claim on leadership in the renewable energy industry, where Chinese companies are already among the world’s dominant players.

Source: China Aims to Spend at Least $360 Billion on Renewable Energy by 2020 – The New York Times