“In about 1991, Bannon was tapped to help sell Castle Rock Entertainment for his client, Westinghouse Electric, according to Bloomberg. Castle Rock was the producing studio behind “Seinfeld.” Bannon brought Ted Turner, the founder of Turner Entertainment, to the table. But when it was time to close the deal, Turner didn’t have enough cash. To get the deal done, Bannon decided to waive some of his fee in exchange for some ownership in five TV shows. One of the shows was “Seinfeld,” then in its third season. It wasn’t yet the big hit it would later become; at the time, it was watched by 18 million people and ranked a sad No. 42 on TV. But Bannon had some vision. “We calculated what it would get us if it made it to syndication,” he told Bloomberg. “We were wrong by a factor of five.” In fact, “Seinfeld” ended its nine-season run averaging 38 million viewers in the No. 1 spot on TV. In reruns, the show is estimated to have generated $3.1 billion by 2013, according to the Financial Times. And as TheWrap points out, if Bannon were entitled to even just 1% of that, he would’ve made $31 million on syndication.” 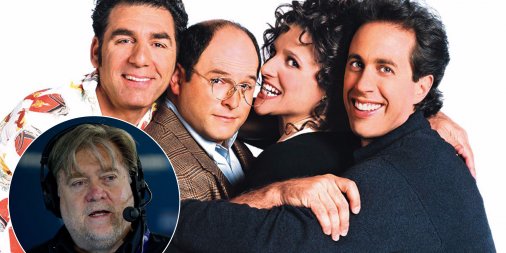 President-elect Donald Trump’s controversial new chief strategist made a fortune thanks to “Seinfeld,” known for its Jewish humor.