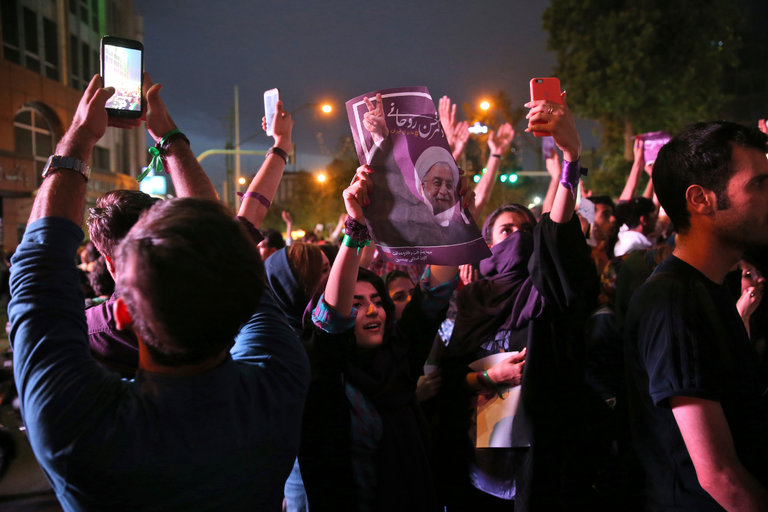 Trump picks Sunnis in Muslim civil war w Shiites. Sectarianism has intensified Saudi / Iran geopolitical rivalry & US has chosen. Realism’s election win has Iranians in Tehran calling for what they hope Hassan Rouhani’s second term will bring: release of opposition figures, more freedom of thought and fewer restrictions on daily life. Rouhani’s supporters also expect his victory, with 57% of vote, to bolster outreach efforts to the West & pursuit of more foreign investment to lift Iran’s ailing economy. Sunni Arab leaders hate Iran for being Shiite & Persian. Trump bringing US closer to nations that share few cultural values with it & have sometimes acted against its interests. Saudi Arabia is a monarchy where citizens have few rights and public practice of any religion other than Islam is banned. It has used its military & oil wealth to protect Sunni monarchy that rules Shiite majority in Bahrain. In adopting Sunni Arab view on Iran, Trump enabling Gulf leaders’ strategy they use when facing resentments of Shiite majority populations unhappy at discrimination. Top, Trump indulging fantasies of Sunni Arab leaders. Below, supporters of President Hassan Rouhani of Iran, a moderate, poured into the streets of Tehran on Saturday to celebrate his landslide re-election.

As voters in Iran danced in the streets, celebrating the landslide re-election of a moderate as president,

and called on them to isolate a nation he said had “fueled the fires of sectarian conflict and terror.”

That nation was Iran.

In using the headline address of his first foreign trip as president to declare his commitment to Sunni Arab nations,

Trump signaled a return to a US policy built on alliances with Arab autocrats,

regardless of their human rights records or policies that sometimes undermine American interests.

At the same time, he rejected the path taken by his predecessor, Barack Obama,

who engaged with Iran to reach a breakthrough nuclear accord,

which even Trump’s administration has acknowledged Iran is following.

Trump has presented the shift as a reinvestment in historical alliances with friendly nations in order to fight extremism and terrorism.

But the juxtaposition of the election in Iran and the gathering in Saudi Arabia seemed to highlight a reality of the Middle East that presidents have long wrestled with:

how to choose partners and seek US interests in a region torn by sectarian splits and competing agendas.

Iran and its allies have effectively found themselves on the side of the US in fighting the Islamic State in Iraq,

while in Syria, they have been adversaries in their support for the rule of President Bashar al-Assad.

Saudi Arabia has at times undermined the United States’ efforts to stabilize Afghanistan.

“We are picking one side in this Sunni / Shiite struggle, and there is very little room for gray,”

said Frederic Wehrey, a senior fellow in the Middle East Program at the Carnegie Endowment for International Peace.

and we are inadvertently picking one side in this sectarian struggle.”

The two scenes — dancing in the streets in Tehran, while Sunni leaders gathered in an opulent hall in Riyadh —

also pointed to a further complicating reality in the Middle East:

a frequent disconnect between the leaders and their people.

In his remarks, Trump signaled his intention to end engagement with Iran,

suggesting that it does not encourage change from inside the country.

But in Iran, many were pushing for change.

Emboldened by the election results, crowds of Iranians in the capital, Tehran, demanded what they hope President Hassan Rouhani’s second term will bring:

the release of opposition figures, more freedom of thought and fewer restrictions on daily life.

Rouhani’s supporters also expect his victory, with 57% of the vote, to bolster his outreach efforts to the West,

and the pursuit of more foreign investment to lift Iran’s ailing economy.

For those who voted for Rouhani, there was a feeling of tremendous relief with his defeat of his challenger,

the hard-line cleric Ebrahim Raisi, who criticized the nuclear deal with the United States and other Western powers.

“Bye-bye, Raisi,” the crowds chanted during the street gatherings.

“He faces a difficult task,” Fazel Meybodi, a Shiite Muslim cleric from the city of Qum, said of Rouhani.

“Now he must provide more freedoms, break the hard-line monopoly on the state-run radio and television, and increase freedom of press.”

To achieve all that, Rouhani must persuade the hard-line-dominated judiciary and security forces to change their outlook, Meybodi said.

“If he fails to deliver on at least 70% of those promises, his future is dark,” he added.

For decades, Saudi Arabia and Iran have competed for religious leadership and political influence across the Muslim world and beyond.

Saudi Arabia, the Sunni monarchy that controls Islam’s holiest sites, sees itself as the natural leader of the Muslim world

and has used its lavish oil wealth to spread its highly politicized right-wing version of Sunni Islam.

Iran, meanwhile, is the world’s largest Shiite nation and is led by clerics who seek the mantle of “protector of the Shiites” throughout the Muslim world.

Each country accuses the other of sowing instability.

As In US, Trump Obsessed With Reversing Obama Policies

In his speech on Sunday, Trump, a guest of the Saudi monarch, spoke of a stronger alliance

with mostly Sunni Muslim nations to fight terrorism and extremist ideology and to push back against Iran.

That pointed to a departure from the policies of Obama,

while pressing for the agreement to limit Iran’s nuclear program.

Proponents of that approach hoped that engagement with Iran would lead to greater moderation among its leaders,

paving the way for its eventual reintegration into the world system.

And it has been successful in promoting secular and liberal trends in Iran,

Sunni Arabs Hate Iran For Being Shiite and Persian

But the nuclear deal angered the Sunni Arab gulf nations.

For them, Trump’s return to America’s traditional allies was a great relief.

The Sunni Arab leaders hate Iran for being both Shiite and predominantly Persian.

Iran was fundamental in the creation of Hezbollah, the Lebanese militant group and political party that now has Lebanon’s strongest military force.

But there is a gap between Iran’s older, ruling clerics and the ambitions of its people,

as was made clear when Iranians came out in force to dance and protest in the streets this weekend,

The election outcome was widely seen as evidence that Iran’s society has changed radically.

most of Iranian society now adheres to middle-class values.

This collided with the anti-Western ideology and strict interpretation of Islam represented by Raisi and promoted by state organizations.

Some used the election’s success to criticize Trump’s visit to Saudi Arabia.

“Iran — fresh from real elections — attacked by @POTUS in that bastion of democracy & moderation,”

“This man just wants to sell American weapons and use Iran as an excuse.”

Trump Ignores Conflict Between Values of US & Sunni Political Islam

In deepening the US alliance with gulf countries,

Trump is bringing it closer to nations that share few cultural values with the US and have sometimes acted against its interests.

Saudi Arabia, for one, is a monarchy where citizens have few rights and the public practice of any religion other than Islam is banned.

and to prop up President Abdel Fattah el-Sisi of Egypt.

In adopting the gulf perspective on Iran, Trump is enabling Gulf Sunni leaders they use when times get hard at home,

especially when facing the resentments of Shiite majority populations unhappy at discrimination.

“It is feeding into the Sunni gulf narrative, where they project a lot of their insecurities about domestic politics outward and onto the Islamic Republic of Iran,”

“But is Iran the source of all evil in the region? No.”

Others questioned the value of working with autocrats to fight terrorism.

“The worldview that we are fighting against needs to be countered with liberal ideas, not Salafi ideas,”

said Mokhtar Awad, a research fellow in the Program on Extremism at George Washington University,