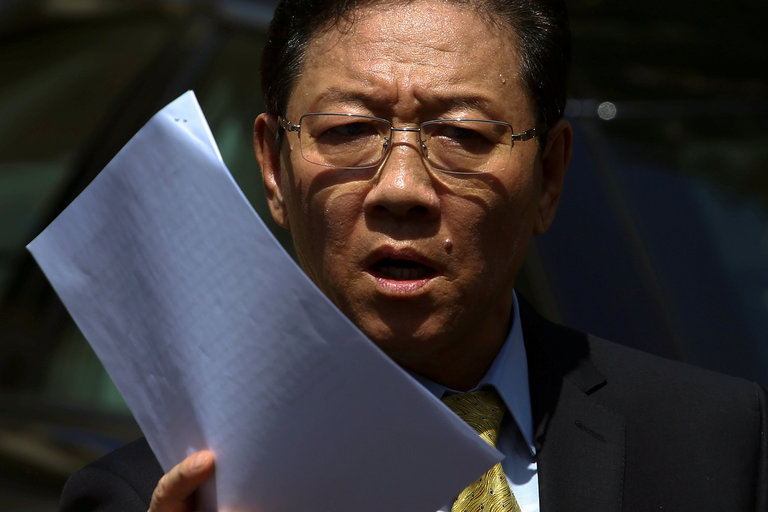 The government of Malaysia declared North Korea’s ambassador “persona non grata” on Saturday and gave him 48 hours to leave the country,

a major break in diplomatic relations after the airport assassination of Kim Jong-nam, the half brother of North Korea’s leader.

The decision to expel Ambassador Kang Chol came after he failed to appear at Malaysia’s Ministry of Foreign Affairs as requested.

Earlier, Kang had ignored a request to apologize for several inflammatory statements,

including questioning the police finding that Mr. Kim was murdered with a banned nerve agent.

“It should be made clear — Malaysia will react strongly against any insults made against it or any attempt to tarnish its reputation,”

less than 20 minutes after two women wiped poison on his face as he prepared to check in for a flight at Kuala Lumpur International Airport.

The women, one from Indonesia and one from Vietnam, have been charged with murder.

The police are seeking seven North Korean men in the case,

including two believed by the authorities to have taken refuge at the North Korean Embassy.

South Korea has accused the North Korean government of masterminding the attack.

He charged that it was politically motivated and accused Malaysia of colluding with outside powers to defame North Korea.

Kang referred to Kim Jong-nam only by the name on the passport he was carrying, Kim Chol,

and sought to have his body handed over to the embassy before an autopsy could be performed.

He subsequently challenged Malaysia’s finding that Kim had been killed with the nerve agent VX,

a highly toxic chemical weapon known to be in North Korea’s arsenal but banned under international conventions.

The Foreign Ministry had set a deadline of 5 p.m. last Tuesday for Kang to apologize for his statements.

“Almost four days have passed since the deadline lapsed,” the foreign minister said in his statement.

“No such apology has been made, neither has there been any indication that one is forthcoming.

For this reason, the ambassador has been declared persona non grata.”

Anifah noted that the police had released a North Korean man arrested in the case, Ri Jong Chol, for lack of evidence on Friday.

He said it was “proof that the investigation is conducted in an impartial, fair and transparent manner, as befits a country that practices the rule of law.”

Declaring an ambassador persona non grata is one of the harshest measures a country can take short of breaking off diplomatic relations.

Malaysia had previously recalled its ambassador from North Korea for consultations and there was no indication when he might be sent back.

Some Malaysians have questioned why the country has an embassy in North Korea at all,

given that there is little trade between the countries and few Malaysian tourists venture there.

On Thursday, Malaysia announced that it would end its practice of allowing North Koreans to enter without a visa, effective Monday.

About 1,000 North Koreans live and work in Malaysia,

where they can help bring in foreign currency for their isolated country,

which has struggled economically under international sanctions.