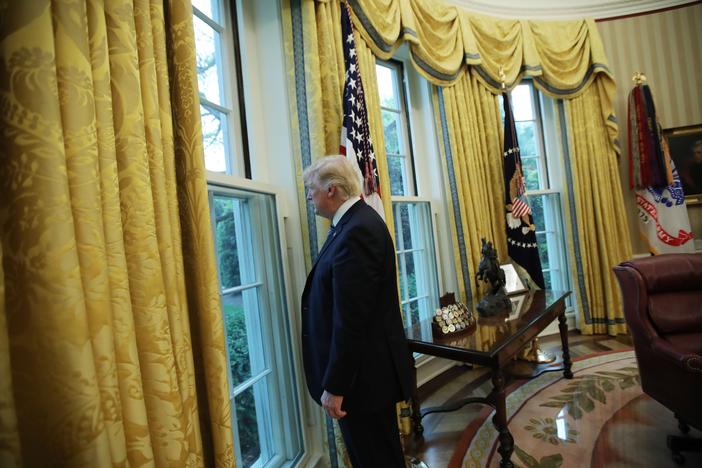 Trump now follows Xi line on both Korea & Taiwan: “I really feel he is doing everything in his power to help with big situation. So I wouldn’t want to be causing difficulty right now for him. My problem is I have established a very good personal relationship with President Xi. He is a good man. He is a very good man and I got to know him very well. I believe he is trying very hard. I know he would like to be able to do something, perhaps it’s possible that he can’t. He certainly doesn’t want to see turmoil and death. He doesn’t want to see it. He loves China and he loves the people of China. So I would certainly want to speak to him first” before making any new moves re Taiwan. Top, Xi weaving spell over gullible Trump in Florida. Below, Trump gazes out an Oval Office window following interview with Reuters, perhaps looking eastward to see signals about what he should do next.

“There is a chance that we could end up having a major, major conflict with North Korea. Absolutely,”

Trump told Reuters in an Oval Office interview ahead of his 100th day in office on Saturday.

about how the US should handle relations with both North Korea and Taiwan.

He lavished praise on Xi for Chinese assistance in trying to rein in Pyongyang.

“With that being said, he loves China and he loves the people of China. I know he would like to be able to do something, perhaps it’s possible that he can’t,” Trump said.

The two leaders met in Florida earlier this month.

Trump spoke just a day after he and his top national security advisers pulled a completely over-blown White House “briefing” on North Korea for the full Senate.

It said it was focusing on economic and diplomatic pressure,

including Chinese cooperation in containing its defiant neighbor and ally, and remained open to negotiations.

U.S. officials said military strikes remained an option but played down the prospect,

though the administration has sent an aircraft carrier and a nuclear-powered submarine to the region in a show of force.

and huge casualties in Japan and South Korea, and among U.S. forces in both countries.

‘I HOPE HE’S RATIONAL’ – BECAUSE I’M CERTAINLY NOT

Trump, asked if he considered North Korean leader Kim Jong Un to be rational, said he was operating from the assumption that he is rational.

He noted that Kim had taken over his country at an early age.

“He’s 27 years old. His father dies, took over a regime. So say what you want but that is not easy, especially at that age.

Trump, sipping a Coke delivered by an aide after the president ordered it by pressing a button on his desk, rebuffed an overture from Taiwan President Tsai Ing-wen,

who told Reuters a direct phone call with Trump could take place again after their first conversation in early December angered Beijing.

China considers neighboring Taiwan to be a renegade province.

Trump was cool to speaking again with Taiwan’s president after an earlier telephone call with her angered China.

“My problem is that I have established a very good personal relationship with President Xi,” said Trump.

“I really feel that he is doing everything in his power to help us with a big situation. So I wouldn’t want to be causing difficulty right now for him.

“So I would certainly want to speak to him first.”

In other highlights of the 42-minute interview, he also said

he wants South Korea to pay the cost of the U.S. THAAD anti-missile defense system, which he estimated at $1 billion,

and intends to renegotiate or terminate a U.S. free trade pact with South Korea because of a deep trade deficit with Seoul.

Asked when he would announce his intention to renegotiate the pact, Trump said: “Very soon. I’m announcing it now.”

MORE LOW-LIGHTS OF THE INTERVIEW

Trump also said he was considering adding stops to Israel and Saudi Arabia to a Europe trip next month, emphasizing that he wanted to see an Israeli-Palestinian peace.

He complained that Saudi Arabia was not paying its fair share for U.S. defense.

Asked about the fight against Islamic State, Trump said the militant group had to be defeated.

“I have to say, there is an end. And it has to be humiliation,” he said,

when asked about what the endgame was for defeating Islamist violent extremism.

Trump also said he hoped to avoid a potential government shutdown amid a dispute between congressional Republicans and Democrats over a spending deal with a Saturday deadline looming.

But he said if a shutdown takes place, it will be the Democrats’ fault for trying to add money to the legislation to “bail out Puerto Rico” and other items.

He also defended the one-page tax plan he unveiled on Wednesday from criticism that it would increase the U.S. deficit,

repeating the discredited supply-side canard that better trade deals and economic growth would offset the costs.