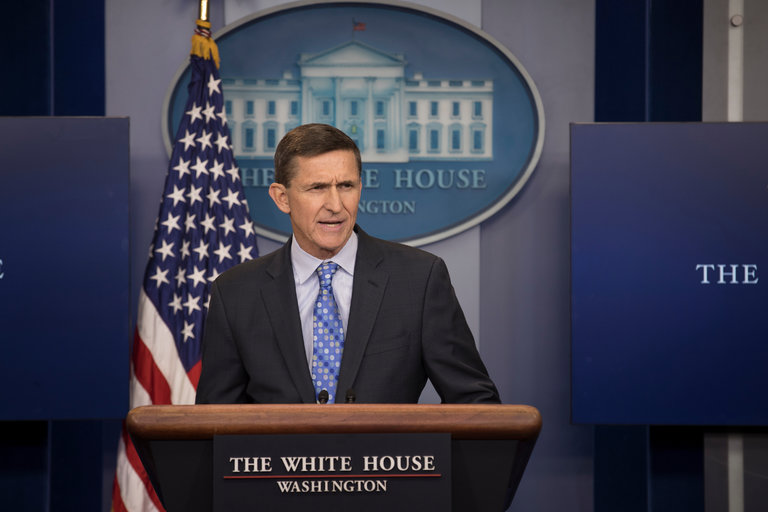 US & Iran – a toxic relationship since the 1950s. US tells Iran what to do or not do. They do what they want. US “sanctions” them, increasing anti-American feeling. Repeat ad infinitum. Repeat ad nauseam. National Security Adviser Michael Flynn blusters here about Iran’s pointless missile test. Drawing vague red lines with Iran only sets up US for humiliation or war.

“There is good reason for Americans to be concerned about Iranian behavior.

Tests of ballistic missiles — especially missiles that can carry nuclear warheads — are destabilizing,

and Iran continues to meddle in its neighbors’ affairs.

Our Middle East partners [ Sunni Arab elites and Israel ] are worried by these activities and want Washington to make Iran pay a price.

Indeed, the Obama administration itself placed sanctions on Iran over its ballistic missile program and

supported the Saudis in Yemen with weapons, intelligence and Navy patrols to interdict weapons shipments from Iran.

National Security Adviser Michael Flynn, then, is not wrong about Iran’s provocative actions and the need for a vigorous response.

The problem is with his performance:

By issuing a warning so imprecise — in such a dramatic, public fashion —

he has set himself and the US up for either an embarrassing retreat or a risky confrontation.

While Trump administration officials have claimed to have a “large range” of options to choose from in responding more effectively to Iran,

the reality is that they do not.

And it would be no small irony if President Trump —

ends up failing to enforce his own.

Why will it prove so difficult to back up Flynn’s words with significant action?

First, contrary to a widespread perception in the region and among Obama’s domestic critics that

his administration had tilted toward Iran and failed to respond to its destabilizing behavior,

under Obama, the US made significant efforts to contain Iran.

Indeed, while the US provides vast military, political and intelligence support to its partners in the region,

even since the nuclear deal, it still does not trade with or invest in Iran.

It continues to maintain a wide array of sanctions related to terrorism, human rights and ballistic missiles,

and deploy tens of thousands of military personnel on a network of nearby bases.

Short of abandoning the nuclear deal —

which would isolate the US and

there is simply not a lot of space for significantly reconfiguring our regional alignment against Iran.

Second, as Trump looks for ways to punish Iran for the tests,

he is unlikely to find much international support,

which would be essential to make any further sanctions effective.

Indeed, as officials in his administration have acknowledged,

ballistic missile tests are not part of the nuclear agreement,

which Flynn cited as the basis for punishing Iran,

only “calls upon” Iran to refrain from certain missile activities.

or at least extend a previous Security Council resolution banning them —

not just Russia and China, but even our European allies in the nuclear negotiations, refused.

They argued that the ballistic missile ban was put in place in 2010 only to pressure Iran to reach a nuclear deal,

and they refused to extend it once that deal had been concluded.

Third and most important, as Trump contemplates his options,

he will also have to consider Iran’s likely response.

If all the administration has in mind is an expansion of existing sanctions, Iran may not react,

but that hardly seems to be what Flynn meant by “officially putting Iran on notice.”

If it were, Iran would likely just carry on with its missile tests and

maintain its rather inexpensive military support for the Houthi rebels in Yemen,

If, on the other hand, Trump plans to back up his adviser’s words with military action —

like carrying out a threat he made last fall that

“they will be shot out of the water” —

he will need to be prepared to manage the consequences, ie a direct military confrontation.

With Iran’s presidential elections scheduled for the spring —

and its own hard-line constituencies opposed to the nuclear deal

and eager to cast America as their implacable enemy  —

Iran is unlikely to back down in the face of mere warnings, or even symbolic military strikes.

It has its own range of response options, including

Any of these responses might prompt an escalation by the US,

including direct use of force against Iran,

especially in the wake of all the administration’s tough talk.

Hopefully, Trump met with his military advisers and thought this all through

before sending Flynn out to make his remarks

[ although, given his performance so far, there is absolutely NO reason to think

there was any systematic discussion of what the US can — and can NOT — do regarding Iran ] .

None of this is to argue against responding to Iranian provocations in the region.

Any and all of the following actions may be advisable in dealing with the latest round of US / Iranian tensions:

All these may be necessary to contain the Iranian threat.

that may make Americans “feel good” about the situation with Iran

but would be almost impossible to enforce — and put the US in a bad situation if it tries.

Philip Gordon, a senior fellow at the Council on Foreign Relations, was the White House coordinator for the Middle East, North Africa and the Gulf region from 2013 to 2015.