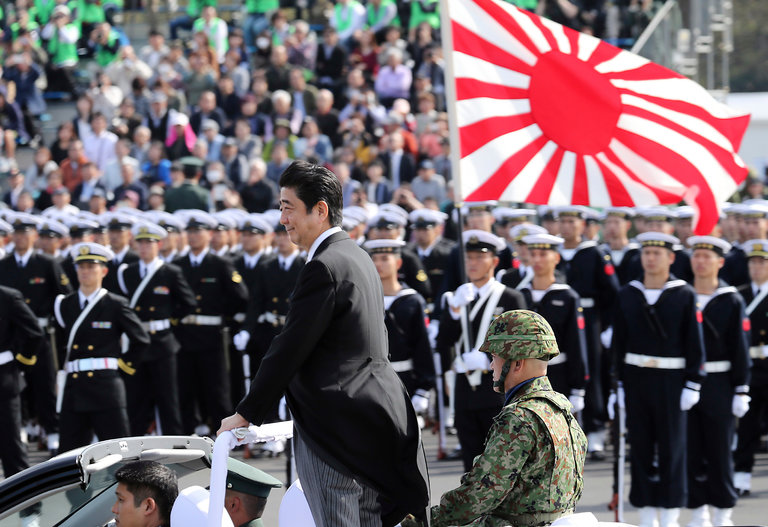 Having frightened Japan with ill-informed and reckless tweets both during the campaign and afterwards, Trump will now try to “schmooze over” the damage he’s done. Given Japan’s fear of China – & Abe’s own right-wing program of re-militarization – the visit will probably go well — as long as Trump sticks to the script, as his advisers have no doubt told him. But who knows what he’ll do ??? Top, Camp Foster, a United States Marine base in Okinawa in 2016. Bottom, Abe reviews Japanese troops last year at a base north of Tokyo.

Prime Minister Shinzo Abe of Japan, the first world leader to meet Donald J. Trump after the election in November,

is scheduled to meet with the president in Washington on Friday in the Oval Office.

Abe is then supposed to fly to Trump’s Mar-a-Lago resort in Palm Beach, Fla., to play golf with the president.

Why are they meeting?

Abe wants to talk to Trump about trade and economic issues, which have already been the subject of some critical Twitter postings and remarks from the president.

Abe is also eager to pursue a closer personal relationship with Trump,

with whom he shares some right-wing ideological leanings, including a resistance to immigration.

What is Abe most worried about?

Abe is concerned about how Trump’s “America First” policies could affect Japanese companies and the country’s broader economy.

Abe will be looking to sound out Trump on the possibility of negotiating a future bilateral trade deal between the two countries.

How will Abe try to persuade Trump that economic alliances with Japan could also benefit the U.S.?

Abe could point out that Japanese companies invest heavily in the United States.

According to the Japan Business Federation, Japanese companies have directly invested

more than $400 billion in building factories and other facilities in the United States,

Abe has also indicated that Japanese companies or the government could invest in American infrastructure.

so that states could build high-speed rail links and create jobs doing so.

How have Japanese companies reacted to Trump?

the automaker announced that it would invest an additional $10 billion in the United States over the next five years,

although it was not clear if that had already been planned.

In December, SoftBank, the telecommunications and internet company, said it would invest $50 billion in the United States,

a move that the company’s founder, Masayoshi Son, said would create 50,000 jobs.

Again, it seems the investment is not entirely new, but it comes from the Japanese company’s previously announced Vision fund,

a $100 billion vehicle for investing in technology companies worldwide.

Other companies, including Sharp and Fuji Heavy Industries, have also recently talked publicly about existing plans to expand or build new factories in the US,

while Nisshinbo Holdings, an environmental and energy conglomerate that makes auto parts,

said it would abandon a plan to build a car parts factory in Mexico,

which, not surprisingly, the Mexicans correctly interpreted as an aggressive move against them by Trump.

What about the yen?

Abe has said that Trump’s criticisms about the yen are “undeserved”– and he’s completely correct about that.

It is true that the value of the yen has fallen steadily as Japan’s central bank has injected cash into the economy,

as being related to the endemic sluggishness in the Japanese domestic economy,

and not as an anti-US trade move.

Are there security issues the leaders might want to discuss?

On the campaign trail, Trump provocatively assailed Japan for not paying enough for its own defense.

But during Defense Secretary Jim Mattis’s recent visit to Japan,

and keep American troops on Okinawa and elsewhere in Japan.

Abe will most likely want to underscore that view and ensure that Trump agrees.

Can Japan pay the U.S. more for defense?

There are signs that Japan might be willing to pay or do more,

but many experts contend that US troops are defending not only Japan but also America’s own interests in Asia.

The Pentagon is budgeted to spend about $5.5 billion to support troops and bases on Okinawa and elsewhere around Japan this year.

Japan is set to spend $1.8 billion to support the bases, in addition to at least $4 billion on related expenses,

including compensation for the communities that host the bases and money for relocating American troops.

Under its Constitution, which was written by American occupying forces after World War II, Japan can keep an army for defensive purposes.

a move that has aroused ire not only in China,

but also South Korea and other East Asian countries occupied by Japan in World War II.

In August, his government requested the latest in a series of increases in military spending.

Source: Trump and Abe to Talk: Why They Are Meeting and What They’ll Discuss – The New York Times