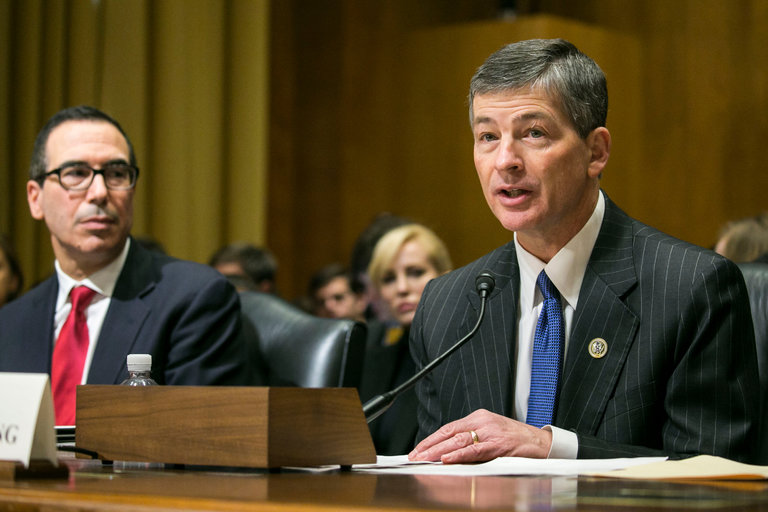 House RPBs have a plan to effectively destroy the Consumer Financial Protection Bureau, the brainchild of Senator Elizabeth Warren [top] and created by Congress in the aftermath of the Black September 2008 financial crisis. A leaked memo drafted by Jeb Hensarling [below, blue tie], chairman of the Financial Services Committee, revealed the plan’s existence. Goldman Sachs alumnus & Treasury nominee Steve Mnuchin is at left in the red tie.

to neuter the Consumer Financial Protection Bureau and its power to crack down on predatory financial business practices,

according to a leaked memo that emerged last Thursday and infuriated Democratic defenders of the bureau.

The memo, drafted by the chairman, Representative Jeb Hensarling, a Republican from Texas and a longtime foe of the consumer agency,

The memo detailed plans to weaken the leadership of the agency,

allowing the president to replace the bureau’s director at any time.

Legislation in the works would

It would also greatly shrink the enforcement tools at the consumer watchdog’s disposal,

and restricting its oversight of big publicly traded companies that are already regulated by agencies such as the Securities and Exchange Commission.

“This would substantially change the structure of the C.F.P.B. and greatly limits the scope of its authority,”

to roll back the Wall Street regulations known as the Dodd-Frank Act, which emerged from the 2008 financial crisis.

While Trump also supports dismantling the law, Republicans would probably be unable to accomplish a sweeping repeal of Dodd-Frank without the support of some Democrats.

That will be difficult to get.

and accused Republicans of plotting to turn an effective consumer watchdog into a “toy poodle.”

Brown said after reviewing the memo.

Trump has been relatively muted on the future of the Consumer Financial Protection Bureau,

which is the brainchild of one of his most vocal Democratic critics, Senator Elizabeth Warren of Massachusetts.

But advisers to Trump have signaled that the administration is prepared to gut the agency.

Steven Mnuchin, Trump’s nominee to head the Treasury Department, said during his confirmation hearing that

the consumer protection bureau, created by Dodd-Frank, should cease to be funded by the Federal Reserve

and should instead be funded through Congress, a move that could curb its independence …

“You bet I’m worried,” Ms. Warren said in an interview.

“I’m worried for the millions of working families who have gotten some help over the last five years from a strong and independent consumer agency.”

She added: “I’m worried that Trump wants to take the life out from that.”

The bureau has returned billions of dollars to bilked consumers since it was created in 2011.

The bureau’s backers point to the nearly $12 billion in financial relief it has provided to about 27 million American consumers as a result of its work.

Big fines recently levied against Wells Fargo and the Navy Federal Credit Union have buttressed their argument that regulation is good for the economy.

Just last week, the bureau fined MasterCard and RushCard $13 million for glitches that denied holders of prepaid debit cards access to their cash.

“People know that financial companies were running amok, and that kind of behavior takes money out of people’s pockets and was the cause of a financial crisis,”

“President Trump campaigned on standing up to Wall Street, and I don’t think his voters are looking for putting Goldman Sachs even more in charge” …

For Trump, hobbling the bureau would have the added sweetness of outraging Ms. Warren,

That revenge would not be that easy to exact.

While Trump is fond of bellowing, “You’re fired,” sacking Cordray could be complicated.

“In my view, attempts to fire him would be not only illegal but unwise politically,”

said Rohit Chopra, a fellow at the Consumer Federation of America and a former official of the bureau.

“The director of the agency is not intended to be a political pawn of the president.”

Changes to the bureau generally need to come from Congress,

and Republican lawmakers have been hoping to tear it down since its inception.

Closing it completely would almost certainly require some bipartisan support,

but some [typically spineless] Democrats have demonstrated a willingness to reconceive the bureau.

Senator Tom Carper, Democrat of Delaware, where a number of major credit card companies have their headquarters, said this week that

he would like to have hearings to address its future and that he would be open to new leadership, the website Morning Consult reported.

“I’ve been interested in exploring the idea of a commission-like approach,” Carper said …

Detractors of the bureau say that its structure is unconstitutional,

a position partly affirmed in October by a federal appeals court,

and that Cordray has amassed too much power …

The federal courts could make it easier for the president to remove Cordray before his term expires.

the president should have the authority to dismiss the consumer bureau’s director at will.

If the full Court of Appeals agrees with that decision, Cordray could be fired immediately.

The case could eventually head to the Supreme Court.

Ms. Warren said that agencies with single directors had existed without complaint,

and that the push to dismantle a watchdog that protects vulnerable consumers went against the populist promises that swept Trump to the presidency.

“Even the majority of Trump voters want to see it protected or expanded,” she said.

For the time being, Cordray and the bureau’s legal team are assessing the impact of Trump’s new executive orders and focusing on the daily business of enforcement.

Cordray would not discuss potential changes to the bureau’s leadership structure,

but he defended its importance to the economy, given the coming wave of deregulation.

“This is hard and immensely important work, and we have made real change in the way financial institutions treat consumers,”

Cordray said in an email BEFORE the Hensarling memo was released.

“Companies know that they have to comply with the law