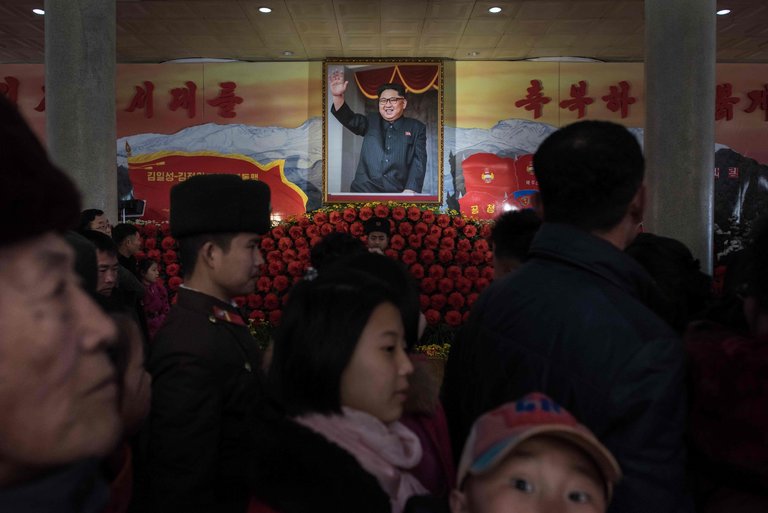 North Korea’s furious response to Beijing’s suspension of coal imports – which have been a major support for the North’s weak economy – are a sign relations may have reached a breaking point. At the same time, Chinese analysts correctly note Beijing now has little remaining leverage. Here, a portrait of Kim Jong-un, the North Korean leader, in Pyongyang last week. China’s Xi Jinping is said to have low regard for Kim, who has not visited China and is not known to have been invited.

“For decades, North Korea could count on China as a loyal ally despite the erratic behavior of the ruling Kim dynasty.

Beijing held its tongue, even as its neighbor engaged in saber rattling, nuclear testing and bombastic threats.

But by this week, things may have gone too far,

with North Korea unleashing a tirade in which it deployed some of the most damning insults in its playbook,

accusing China of “dancing to the tune of the U.S.” and “styling itself as a big power.”

Chinese observers of relations between the countries were left in disbelief about how rapidly those ties have deteriorated,

despite the fact Beijing cut off coal imports that provide badly needed currency for the North’s economy.

“At first many people thought it was a fake commentary,” Cheng Xiaohe, associate professor of international studies at Renmin University,

said of the tirade against China, published in the North’s state-run news media on Thursday.

“It is a big surprise that North Korea has launched such a strong attack against China.

I expected an angry reaction — but not this strong.”

The diatribe, carried by the Korean Central News Agency, came just before

the half brother of the North’s leader, Kim Jong-un.

North Korean agents are suspected of masterminding the attack.

is sure to put more pressure on China’s relations with North Korea,

which some Chinese analysts say are at their lowest point since the founding of the North as a separate country after World War II.

“It’s wrong to kill the half brother. It’s more wrong to have used banned chemical agents.”

Earlier this month, the North issued a more indirect takedown of Beijing in its government newspaper Minju Joson, signaling a growing rift.

boiling tensions between China’s president, Xi Jinping, 63, who sees himself as a global leader, and Kim, 33, an eccentric dictator.

Xi is said to have low regard for Kim, who has not visited China and is not known to have been invited.

Despite past periods of turbulence, including under Mao Zedong,

both sides have more or less tried to preserve a polite public veneer of amity.

But the friendship was a myth, said Shen Zhihua, a professor of history at East China Normal University.

The Chinese government has always viewed North Korea as a “vassal country,”

he said in an interview with Phoenix Television on Thursday, shortly before the North Korean editorial was published.

“You can go through the People’s Daily from 1949 to this day,

we have never said a single word of ill, all words of praise,” about North Korea,

said Shen, who is one of China’s pre-eminent historians on the North.

“Meanwhile, the North Korean newspapers do not speak ill of China.”

Even as the relationship has noticeably worsened in recent weeks, China has maintained public restraint.

An editorial in Global Times, a state-run tabloid that reflects the thinking of senior government officials, noted on Friday that

the suspension of coal imports was “fair” and in keeping with United Nations sanctions.

“China and North Korea are friendly neighbors, and we are willing to work with the North Korean side in joint efforts to develop healthy and stable relations,”

The ministry also played down the significance of the Malaysian announcement that VX had been used in the killing of Kim Jong-nam.

“It is only a preliminary result published by Malaysia, and there is not conclusion on this yet,” Geng said.

It was not immediately clear how much China’s ban on coal imports would affect North Korea’s ability to look after its population.

And at least publicly, China said that it was imposing the ban only because

it had already fulfilled its coal quota allowed under United Nations sanctions.

That seemed to suggest that Beijing may have already paid Pyongyang for the coal it imported in the first 50 days of this year,

money that would go directly to the North’s cash-starved government, experts said.

to use its [now, almost non-existent,] leverage to curtail the North’s rapidly expanding nuclear weapons program.

President Trump has said China can do significantly more to persuade the North to scale back its nuclear program,

even as Beijing has told Washington that it holds limited influence.

The latest flare-up is likely to further weaken that leverage,

while illustrating the resistance of Kim Jong-un to China’s arguments in favor of a denuclearized Korean Peninsula.

“In terms of diplomacy, I see no solution,” said Yan Xuetong, the director of the Institute of International Studies at Tsinghua University.

Yan, writing in the Chinese news media this week, said that China had no choice but to accept the North as a nuclear-armed state.

That was because China had only two options:

either a nuclear North Korea that was friendly toward China —

or a nuclear North Korea that was unfriendly, he wrote.

“I am very pessimistic about this issue,” Yan said.”