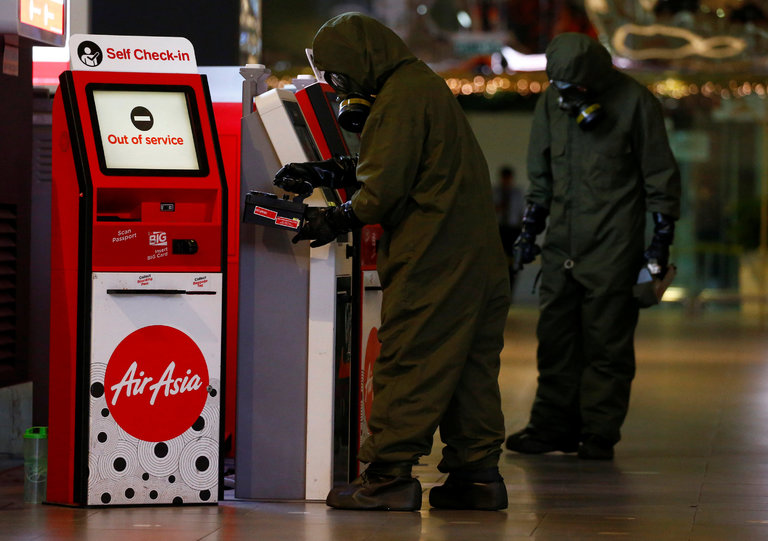 Never-popular North Korea now faces humiliation of canceled US meetings after blow-up w only ally China. Back-channel talks would have given Pyongyang “face” & could have helped it walk back some of its threats, especially w possibility of US economic aid to replace future lost revenues from Beijing. Always unpredictable, Kim Jong-un could now be more dangerous than ever. Here, a hazmat team conducting checks at airport terminal in Sepang, Malaysia, over the weekend.

“After approving plans on Friday for informal talks in New York between a North Korean delegation and former American officials,

two people who were to take part in the planned talks said.

The schedule called for the two sides to meet in early March,

and arrangements were underway for the six-member North Korean group,

led by Choe Son-hui, who runs the American affairs bureau of the North’s Foreign Ministry, to travel to New York.

The organizer of the talks, the National Committee on American Foreign Policy, led by Donald S. Zagoria,

was told by the State Department on Friday morning that the visas would be granted.

But the decision was reversed in the afternoon when “someone overruled State,”

said one person who planned to participate in the talks.

Both of the people on the participants’ list spoke on the condition of anonymity because of the delicacy of the matter.

The reversal came as the Malaysian government announced that VX nerve agent,

a chemical on a United Nations list of weapons of mass destruction,

was used to kill the estranged half brother of the leader of North Korea at the Kuala Lumpur International Airport on Feb. 13.

South Korea has accused North Korea’s leader, Kim Jong-un, of ordering the killing of his half brother, Kim Jong-nam.

timed to coincide with the visit of Japan Prime Minister Shinzo Abe to the US.

News of the missile test arrived as President Trump and Abe were eating dinner at Mar-a-Lago, the president’s members-only club in Palm Beach, Fla.

At first, the North Korea developments did not appear to deter the State Department’s plan to move ahead with the talks.

The use of the VX nerve agent was already known when Zagoria got the green light about the visas on Friday morning.

The State Department also knew about tough comments Trump made about the North Korean leader during an interview with Reuters on Thursday.

The decision to reverse the initial approval for the visas came hours later on Friday afternoon,

one of the people who planned to take part in the talks said.

But it was clear, that person said, that a senior official in the State Department, the White House or elsewhere in the government

had second thoughts about issuing visas to representatives of North Korea in light of recent events.

“I suspect it was a combination of the VX attack and the president’s personal pique that caused the reversal,” the person said.

“Someone obviously looked at the fact the US was going to issue visas to representatives of a country that had just violated international law,

carried out a murder, intentionally violated the sovereignty of another country,

and decided, ‘Maybe this isn’t such a good idea.’”

While the talks were unofficial, they were seen as a test of the willingness of the Trump administration to begin serious negotiations at a later date,

or to send a special American envoy to North Korea.

allowed it to make significant advances in its nuclear weapons program.

“Every six to seven weeks North Korea may be able to add another nuclear weapon to its arsenal,”

a senior fellow at the Center for International Security and Cooperation at Stanford University, said in a recent Op-Ed article.

The leader of the North Korean delegation, Ms. Choe, planned to travel to New York in her “nongovernmental” role as president of North Korea’s Institute for American Studies.

The American participants were mostly former officials who had dealt with North Korea over many years.

Some of them have participated in similar gatherings with North Koreans organized outside the United States.

But more weight was given to the New York gathering because it was taking place at the start of the new administration.

During his election campaign, Trump said he was open to meeting with the North Korean leader over a hamburger.

The Americans in the group represented a wide range of views on North Korea.

Winston Lord, a former ambassador to China who was on the list of participants, recently wrote in a dissent to a report for the Asia Society

that the United States should immediately step up sanctions on North Korea.

Others in the American delegation were

Gallucci and Cha wrote a report for the George W. Bush Institute last year that emphasized the human rights abuses in North Korea.

As well as holding discussions about the North’s rapidly expanding nuclear program,

the American delegation was planning to talk with the North Koreans about two Americans now detained in North Korea.”