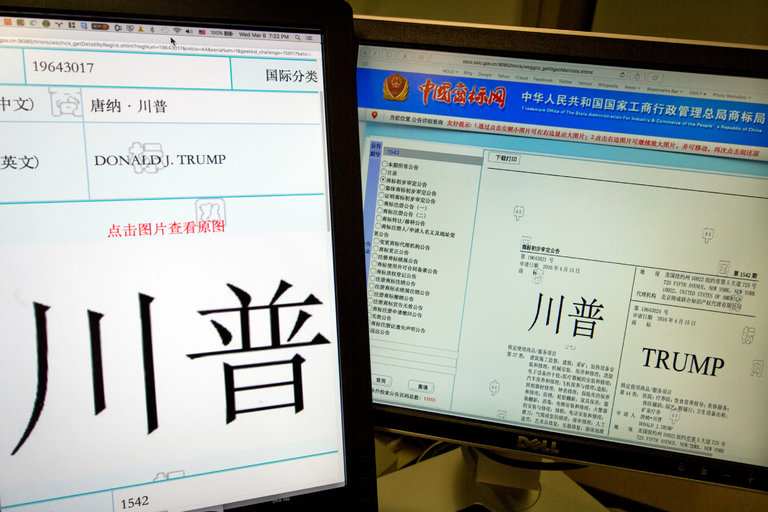 Has Xi Jinping been getting advice from Vladimir Putin about how to “manage” Trump ??? China recently granted him preliminary approval for 27 new trademarks in a variety of areas, which could add to criticism over potential conflicts of interest. Here, computer screens showing some of the Trump trademarks approved by China’s Trademark office, as seen on their website in Beijing on Wednesday.

President Trump has won preliminary approval to register 27 new trademarks in China for industries including restaurants and advertising,

business interests that could add to criticism over his potential conflicts.

As a businessman, Trump has amassed a vast portfolio of trademarks around the world, as he seeks to protect his brands and his products.

Those trademarks, of course, clash with the vision of a populist president who has espoused a strategy of “America First.”

China has been among the biggest targets for his business prospects.

Including the latest batch, his companies have filed for at least 126 trademarks in China since 2005

But as president, Trump has criticized China for its trade practices.

On the campaign trail, he threatened to impose punitive tariffs against the country.

The timing of the new trademarks create a perception problem for Trump because they came so soon after he took office.

In February, the Chinese government announced it was granting Trump the right to protect his name brand for construction projects, after a decade-long legal battle.

That trademark approval was announced just days after Trump pulled back from his challenge to China’s policy on Taiwan in a call with Xi Jinping, the Chinese president.

A number of trademarks have followed, with China’s Trademark Office giving preliminary approval for the 27 new ones on Feb 27 and on Monday, according to the agency’s website.

The latest trademarks, which were under the name “Donald J. Trump,” were initially approved for use in

They will be formally registered three months later, if the agency receives no objections.

The Associated Press reported earlier about the trademarks.

it was atypical that all the trademarks were “approved at once.”

That makes you look and think:

‘Somebody got some instructions at the trademark office that these should be approved,’” Dresden said.

“It’s unusual for that many trademarks to go through the examination process without any problems.”

Trump had registered the trademarks last April, before he was elected, but while his campaign was fully operational.

Critics say Trump’s trail of trademarks could leave the president vulnerable to potential conflicts of interest.

In February, Senator Dianne Feinstein of California sounded alarms about China’s decision to award Trump his trademark in construction services,

saying it could be a breach of the US Constitution, and that foreign governments could use his trademarks to influence foreign policy decisions.

It is unclear whether the Trump Organization will profit from the new trademarks in China.

While the company has pursued a large number of hotel development deals in the country,

one of its executives recently suggested that the organization would drop those projects.

The Trump Organization has said it would not be doing any new international deals. Trump has said he is turning over control of his business to his two adult sons.

“The Trump Organization has been actively enforcing its intellectual property rights in China for more than a decade,

and its core real-estate related trademarks have been registered in China since 2011 — many years before President Trump even announced his candidacy for office.

“The latest registrations are a natural result of those longstanding, diligent efforts,” he added,

“and any suggestion to the contrary demonstrates a complete disregard of the facts as well as a lack of understanding of international trademark law.”

In recent years, China has enhanced its trademark laws to bring them more in line with the international legal system.

In January, after Trump’s election, China’s top court said celebrity names cannot be registered as trademarks in ways that could mislead consumers.

The interpretation came a month after the court ruled largely in favor of Michael Jordan, the former basketball star,

in a landmark decision that sets the ground rules for protecting personal names in trademark cases.

The Trump brand has been a ripe target for trademarks.

Trump’s name can be found on toilets, cosmetics and leather goods in China —

trademarks that have been registered by other people.

In a recent interview, Spring Chang, founder of Chang Tsi & Partners, a law firm in Beijing that represents the Trump Organization, said

she did not want to comment on Trump’s specific trademarks.

But she said she encouraged a “defensive strategy” for her clients

to prevent a celebrity’s name from becoming treated as a generic term.

Asked whether Trump plans to sue people who have registered his name as trademarks in China,

“We haven’t discussed our strategy with him.