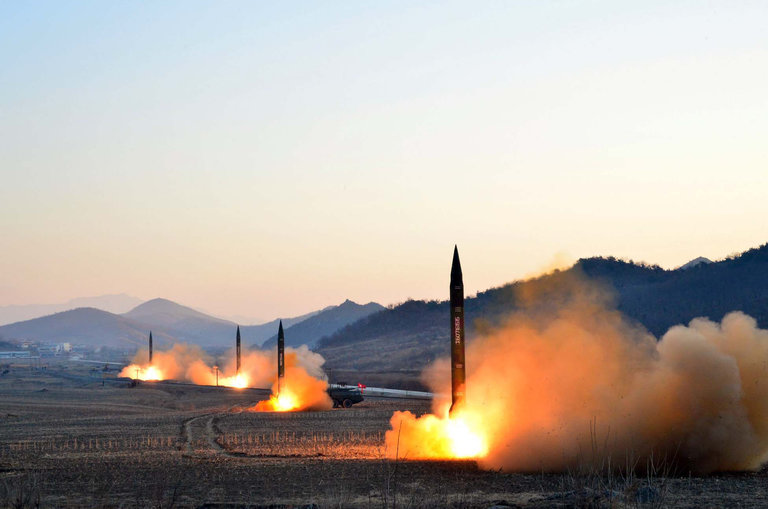 When the US began deploying a missile defense system in South Korea on Tuesday,

it was apparently to protect an ally long threatened by North Korean provocations.

in a region already on edge over the North’s drive to build a nuclear arsenal, and destroy Kim Jong-un’s perceived enemies.

in what it called America’s grand strategy to set up similar defenses across Asia,

threatening to tilt the balance of power there against Beijing.

These tensions are testing the new Trump administration and its uneasy allies South Korea and Japan,

which have complained for years that China has simultaneously chastised and coddled the North,

refusing to enact stiff enough measures to force it to abandon its nuclear and missile programs.

But with the beginning of work to install the antimissile system,

the delicate international cooperation against North Korea is splintering:

Beijing is expressing more concern about American intentions in the region

than about the dangers of the North’s latest surge in nuclear and missile testing.

“The two sides are like two accelerating trains coming toward each other, and neither side is willing to give way.”

“Our priority now is to flash the red light and apply brakes,” Wang said at a news conference in Beijing.

He said North Korea should suspend its nuclear and missile activities and that,

in exchange, South Korea and the US should suspend large-scale joint military exercises,

laying the groundwork for new negotiations with North Korea.

President Trump got personally engaged in the problem on Monday night,

that the North Koreans later described as practice for hitting American bases there.

usually code words for raising the possibility of a military response.

and demonstrate unity with Trump, who had suggested during the campaign

that Asian nations needed to do far more to defend themselves.

But South Korea remains deeply divided about the one response already underway:

the deployment of the Terminal High Altitude Area Defense System, or THAAD.

It is designed to intercept short- and medium-range missiles,

but not the kind of intercontinental missiles the North says it is developing to reach the US.

Many South Koreans oppose it and worry about China’s moves to block South Korean imports,

not the missile capabilities of Kim Jong-un, the North Korean leader.

Japan is urging stronger American action, but remains uncertain about how much it wants to commit,

when a conflict with the North — deliberate or accidental — once again looks like a real possibility for the first time since the late 1940s.

The combination of military and diplomatic tensions suddenly unleashed in Asia

comes before Trump’s full national security team is in place —

and before it has any well-thought-out strategy, either regionally or globally.

Secretary of State Rex W. Tillerson, who will travel to the region next week — stopping in Tokyo; Seoul, South Korea; and Beijing —

has never dealt with a proliferation problem like this one,

his only “diplomatic” experience being negotiations, as head of ExxonMobil, with Trump “pal” Vladimir Putin.

Defense Secretary Jim Mattis has already been to Seoul on one visit,

but was there mostly to reassure the country that, despite Trump’s statements last year,

the United States remains committed to its defense.

than dealing with the peculiar problem of a nuclear-armed failing state.

the National Security Council deputies have considered a range of options,

and have already come to the predictable conclusion that

a dramatic show of force, like attacks on the North’s missile and nuclear sites, would probably start a war.

The New York Times reported this weekend that the Obama administration had created a cyber- and electronic-warfare program to slow the North’s missile tests,

but that it was unclear how effective it had been, particularly in recent months.

The North Koreans have made the most of this period of uncertainty and transition.

Their sped-up testing seems intended to send a message that they can overwhelm antimissile defenses,

deploying missiles faster than the US and its allies can put countermeasures in place.

And they hold an ace card:

an ability to destroy Seoul with artillery buried in the mountains just north of the Demilitarized Zone,

a remnant of the Korean War.

In the North’s view, the American rush to put missile defenses around it only splits the global community,

pushing China and Russia closer to Pyongyang, as American officials acknowledge when speaking on the condition of anonymity.

Tillerson is focused on ways to pressure China, while trying to set up a first meeting between President Xi Jinping and Trump.

But the two nations’ leaders are each conducting a balancing act.

Xi’s is the hardest, trying to weigh his opposition to Kim’s nuclear program

creating the possibility of a flood of millions of hungry, poorly-educated refugees.

The Trump administration is measuring how hard it can press Beijing.

It is mulling negotiations to “freeze” the North’s nuclear arsenal —

but that would also acknowledge it as a fact.

“You may not want to acknowledge that North Korea has 12 or 20 weapons,”

“but wouldn’t a freeze be better than looking at 100 weapons a few years from now?”

That is exactly the debate taking place in the White House, as Trump’s aides try to figure out their alternatives,

including changing the security landscape with a major military buildup

or, if needed, an open conflict with North Korea.

The current, slow-burning crisis arose not from one episode, but from Kim’s broader strategy over the past year:

to accelerate the pace of nuclear and missile tests so his arsenal becomes a fait accompli,

something the United States cannot hope to reverse.

AND at American aircraft carriers around the Korean Peninsula,

The ability to launch a barrage of missiles increases the chances of breaching an antimissile shield.

including the Scud-ERs, with a 620-mile range —

pose another problem for South Korea.

Some of the missiles have been launched at a steep angle

to achieve a higher altitude and return to earth at high speed,

techniques that appear intended to complicate intercepting them.

they illustrated Pyongyang’s ability to carry out a salvo of launches — and on very short notice.

“What we saw this weekend was demonstration of a near-term simultaneous launch,”

“That is something beyond what we have seen in the past.”

For Washington and Seoul, the rush to field THAAD is as much about politics as missile interception.

would force the United States to deploy missile defenses in the region.

before any opposition progressive leader — skeptical of the deployment — can take power in a coming presidential election.

But the opposition progressives have deeply-held reservations about the THAAD deployment,

seeing it as part of the US effort to wrap the South into an anti-China coalition and arms race.

They have already mounted a case against it.

“Our business are dying; our people residing in China are being threatened.”

Hong Ik-pyo, a senior policy maker in the opposition, said

the THAAD deployment would do more harm than good for South Korea,

whose economy depends on exports for growth,

and reaps a huge annual trade surplus with China.

“They say this is only to defend us from North Korea,

but everyone knows this is part of the American missile defense plan,” Hong said.

“China sees the THAAD deployment in South Korea the way Americans saw the Cuban missile crisis in the 1960s.”

The Chinese government said Tuesday that it continued to oppose the deployment of THAAD.

Chinese leaders have also struggled to grapple with the unpredictable styles of both Kim and Trump.

Now there are fears the North might take advantage of the political discord to move ahead with its nuclear weapons program.

“They have seized this opportunity, knowing the US and China are clashing,”

In recent weeks, China has toughened its stance on North Korea, including banning imports of coal from the North.

Criticism of the North has also sharpened.

On Tuesday, a state-run newspaper warned that North Korea should give up its weapons or “face long-lasting isolation and pressure.”

Yet policy makers in Beijing seemingly fail to grasp

being able to place a warhead on an intercontinental ballistic missile,

said Paul Haenle, the director of the Carnegie-Tsinghua Center at Tsinghua University in Beijing.

“That’s a game-changer,” he added.