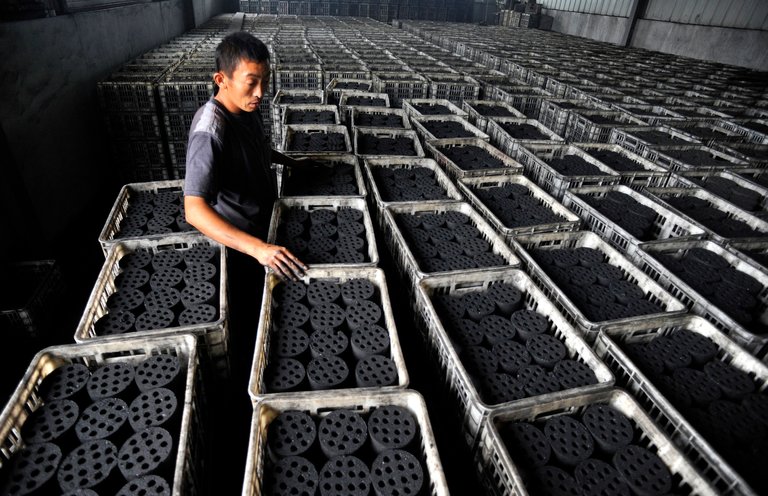 China ban on North Korea coal, a bid to get Kim Jong-un to curb his nuclear ambitions, was also a signal to Trump: We’ve done what you and South Korea have been asking for years — now it’s your move. Will Trump issue visas to the North Koreans, a move that would suggest he is interested in at least hearing from Pyongyang through informal channels? And what about those joint military exercises with South Korea ??? A coal briquettes factory in Qingdao, China that uses imports from its “juche” neighbor to the East.

For years, the US and others have pressed China’s leaders to suspend imports of coal from North Korea

to push the reclusive state to abandon its nuclear weapons program.

For years, the Chinese leadership resisted — until Saturday,

when it suddenly announced in a terse statement that it would do just that.

But if Beijing was sending a message to North Korea,

it was also directing one at President Trump,

who has complained that China was not putting enough pressure on North Korea.

We have done our part in enforcing sanctions. Over to you, Mr. Trump.

The challenge comes at a tantalizing moment.

For weeks now, plans have been afoot for a North Korean government delegation to meet in New York in early March

with a group of former US officials who have long been involved in North Korea policy.

Will the Trump administration issue visas to the North Koreans,

a move that would suggest the new president is interested in

at least hearing from Pyongyang through informal channels?

There have been indications Trump was willing to take a quite different tack from President Barack Obama.

During his campaign, Trump said he was interested in sharing a hamburger with the 33-year-old leader of North Korea, Kim Jong-un.

He seemed to suggest he had a smidgen of respect for, or at least curiosity about, the maverick leader, the most recent incarnation of a longstanding dynasty.

perhaps the result of Obama’s warning after the November election

that North Korea would be the incoming president’s most dangerous foreign policy challenge.

“If the visas are issued, it will be a clear message the Trump administration is prepared to go the extra mile and engage North Korea,”

There should be little expectation, he warned, of any policy shift by the North,

which has shown every indication of wanting to continue building its nuclear program.

falls far short of talks between the two governments, and has been designed as an initial sounding board.

“I have been organizing such meetings with the North Koreans since 2003,

and our goal is to increase mutual understanding as well as

to encourage the kind of frank dialogue that may not be possible in official talks,” Zagoria said.

given North Korea’s expansion of its nuclear weapons program.

That North Korea is holding two Americans hostage was another impediment.

Meetings with North Korean officials arranged by Zagoria and other groups were held in world capitals during the Obama era,

The decision whether to allow the meeting to proceed in New York is now freighted with more than the usual complications.

Over the last 10 days, North Korea has shown its full colors.

First, the regime flaunted its expanding nuclear capabilities with the test of an intermediate-range ballistic missile

that uses a solid-fuel technology that will make it easier for the country to hide its arsenal.

Then, last week, Kim Jong-nam, the half brother of the North Korean leader,

was assassinated in Malaysia in a crowded passenger terminal at Kuala Lumpur International Airport.

The South Korean government has publicly accused North Korea of the killing,

and six North Koreans have been linked to the plot.

Without these two incidents, the Trump administration could have won praise for

breaking the logjam with North Korea by allowing the New York meeting to go ahead,

said a former participant in such meetings who declined to be identified because of the sensitivity of the topic.

But the assassination of Kim Jong-nam would now allow opponents of North Korean engagement to charge that granting visas only rewarded bad behavior, the person said.

Soon after the killing, Republican and Democratic members of Congress called for the US to

return North Korea to its blacklist of states that sponsor terrorism, from which it was removed nine years ago.

The Trump administration faces another, perhaps more profound, decision on how to handle North Korea.

are expected to involve an American aircraft carrier, advanced stealth fighters, B-52 and B-1B bombers and a nuclear submarine,

according to South Korean news reports.

This annual show of force, not far from the demilitarized zone between North and South Korea and off the Korean coast,

has traditionally been viewed by North Korea as an American preparation for an attack against its forces.

With the heightened tensions on the Korean Peninsula, and Chinese-North Korean relations at a low point,

the risk of a strong response by the North to the exercises — through the launch of missiles or a nuclear test — is higher than usual,

said Peter Hayes, the executive director of the Nautilus Institute for Security and Sustainability in Berkeley, Calif.

“We are likely entering a new and extremely dangerous phase of the Korean conflict,” Hayes said.

He suggested ramping down the exercises to “avoid inadvertent clashes and escalation to nuclear war, and to probe North Korean intentions.”

China would like the Trump administration to deal directly with North Korea.

Beijing’s suspension of coal imports from North Korea was a signal that China was being tougher than usual,

But how much impact a suspension of coal imports would have on the rudimentary and seemingly resilient North Korean economy was far from clear.

The Foreign Ministry insisted Tuesday that the suspension of coal imports was a bureaucratic procedure.

In the first six weeks of 2017 China had already imported almost all its annual quota of coal allowed under the United Nations sanctions, the ministry said.

Zhang Liangui, an expert on North Korea at the Central Party School of the Communist Party, said

he was not optimistic that any talks with North Korea, formal or informal, would result in a diminishing of the North’s nuclear capabilities.

“North Korea has said more than 50 times that it will not participate in any talks that have denuclearization on the agenda,” he said.

“I don’t think President Trump could pull this off and talk the Koreans out of it.”