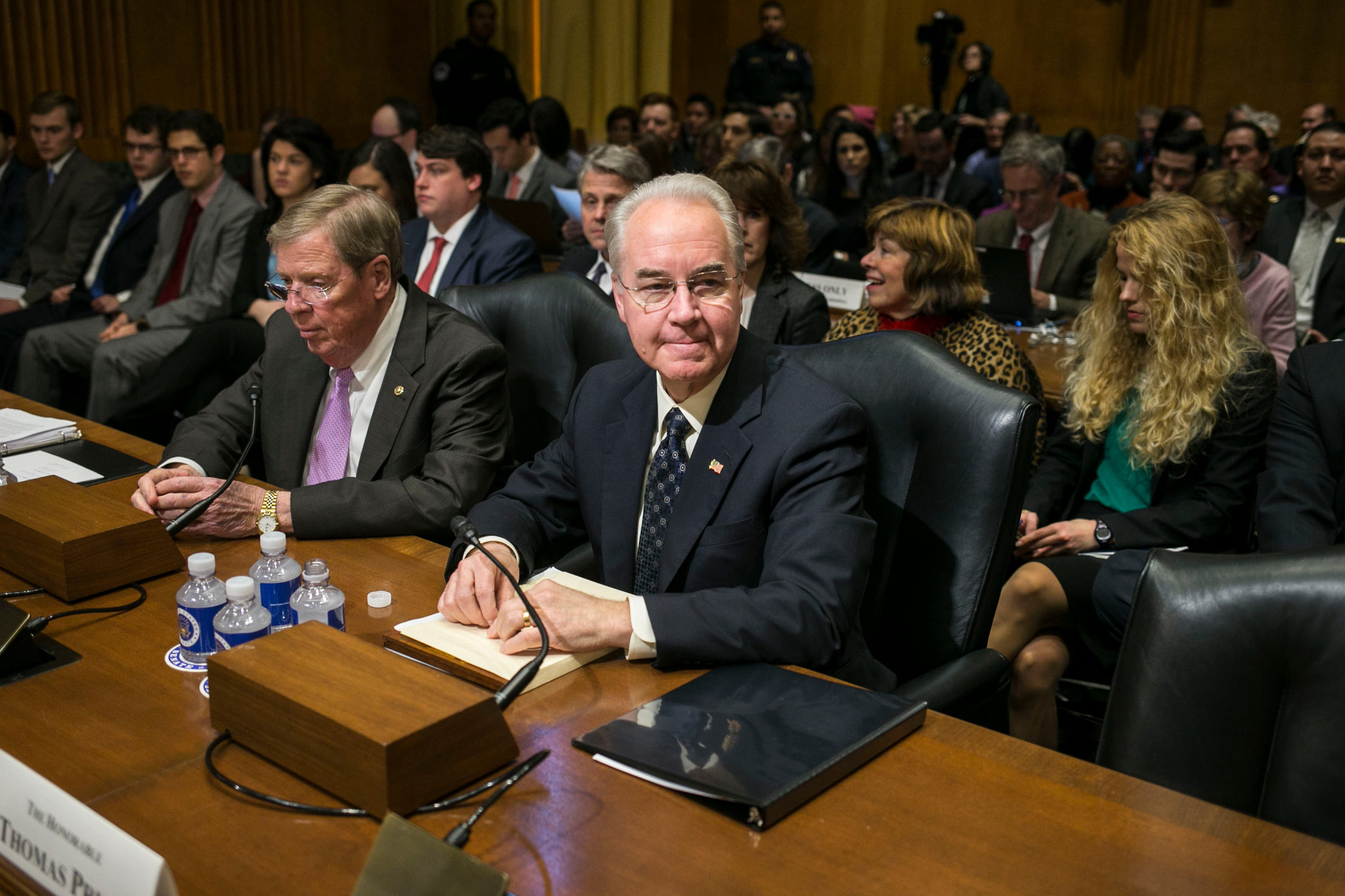 While RPB domination of Senate makes confirmation likely, Tom Price reveals himself as simultaneously sleazy in his own financial dealings and completely without compassion for poor people in medical difficulty. A perfect symbol of the Trump regime.

Two different articles from the New York Times highlight the utter inappropriateness of Tom Price as pick for Heath and Human Services.

With his usual mis-direction, Trump’s claim of “insurance for everybody” – but only after Price is confirmed – seems to have been completely forgotten,

as Price’s sleaziness shocks even jaded Democrats, and forces blowhards like Orrin Hatch to “decry” the “hyper-politicization of the nomination process” …

From the Hearing Briefing, linked to below:

A background investigation says he understated the value of his investments in an Australian pharmaceutical company, Innate Immunotherapeutics,

and claimed income tax deductions that he could not substantiate.

The findings emerged from a review of Price’s tax returns and other official documents by committee staff members from both parties.

In a questionnaire in December, the committee staff said,

Price understated the value of 400,613 shares of an Australian bio-tech company he purchased in August 2016 through “a private placement offering.”

The value of the shares was listed on the questionnaire as $50,000 to $100,000, but that reflected the purchase price, the staff reported.

At the request of the committee, Price recalculated the value of his holdings to reflect their market price. The revised value was $100,000 to $250,000.

for the depreciation of land associated with condominiums that he owns in Washington and Nashville.

Moreover, the staff said, Price and his wife, both physicians, claimed “miscellaneous employment deductions totaling $19,034” for various expenses in 2013, 2014 and 2015.

Neither Price nor his wife work as a physician, the staff report said, and “proper documentation could not be located,”

so Price’s tax returns will be amended to remove the $19,034 in deductions.

Senator Ron Wyden of Oregon, the senior Democrat on the Finance Committee,

questioned Price over his trades of health care stocks during his time in Congress.

“It is hard to see this as anything but a conflict of interest and an abuse of position,” Wyden said.

In particular, Wyden pressed Price over his investments in Innate Immunotherapeutics,

Line of the day, so far

“I feel like I’ve been asked to be a character witness in a felony trial in the sentencing phase of a conviction,” he said.

He called Price “an honorable man.””

Funny definition of “honor” you guys have in Georgia, it seems …

From the Times story on Price’s hearing:

“Democrats on the Finance Committee put Price through three and a half hours of grueling interrogation.

But they appeared unlikely to block his confirmation unless other damaging information comes to light.

“We’ve always known where the votes are,” said Senator Ron Wyden of Oregon, the senior Democrat on the committee.

The panel could vote next week on whether to recommend confirmation, with its Republican majority strongly supporting Price.

to provide relief from costs, penalties and regulatory burdens imposed on consumers, insurers and health care providers by the Affordable Care Act.

Wyden asked Price if he would promise that no one would be worse off and no one would lose coverage as a result of the order.

Senator Maria Cantwell, Democrat of Washington, said the administration appeared to be planning a “war on Medicaid.”

Price rejected that description, saying he wanted to give states more control over Medicaid, which covers more than 70 million low-income people.

[N.B. RPBs’ favorite trick in situations like this: changing specifically mandated spending for programs like Medicaid into BLOCK GRANTS,

which states can manipulate to a much greater degree, and, which, when they need more money,

can be used to force cuts in either the program itself or other, related, programs.]

Senator Dean Heller, Republican of Nevada, asked Price for a commitment that any replacement for the Affordable Care Act would

allow states to continue the expansion of Medicaid eligibility already approved by Nevada and 30 other states.

[Price avoided the question with his now-familiar rhetoric about “individual care”.] …

That answer did not satisfy Senator Bill Nelson, Democrat of Florida, which is home to more than four million Medicare beneficiaries.

“If I gave them that answer,” Nelson said, “I would get run out of the room with a group of senior citizens.”

Price also declined to say how he would carry out Trump’s promise to drive down prescription drug prices.

If Trump actually does that, it will almost certainly be “over the dead bodies” of Price and other mainstream Congressional RPBs,

who have consistently voted to DENY the government the “right” to negotiate prescription drug prices with Big Pharma.

Like we said, with Trump and Cronies, it’s all about mis-direction —

apparently no one, including Democrats, even thought to ask Price what he thought about Trump’s “insurance for everyone” claim …