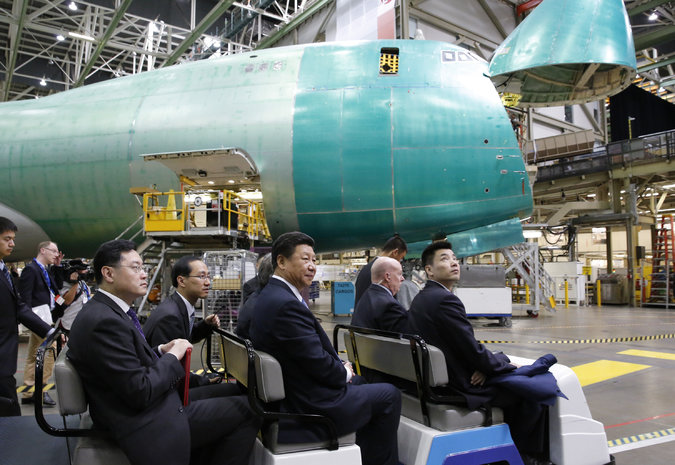 To be sure, China would be severely hurt if it responds in kind to Trump & Cronies’ barrage of provocations. But the US would be equally damaged. And so will the rest of the world. This is by far the most dangerous aspect of all Trump’s insanity. Here is Xi Jinping at Boeing in 2015.

For weeks, we’ve been waiting for this article to appear in the New York Times.

And previous pieces about the trade war Trump and Commerce nominee Wilbur Ross are so anxious to start have failed to link it to possible Chinese military responses.

So it’s about time this showed up.

As dangerous as is everything else Trump is doing, the non-stop attacks on China are by far the most serious — without question.

“For China, President Trump’s scrapping of the American-brokered Pacific trade agreement is a chance to extend Beijing’s economic and political influence.

And it is an opportunity to deepen ties with its neighbors in Asia.

But with a cooling economy at home and a looming leadership shake-up,

the last thing President Xi Jinping wants is a trade war, though officials are girding for that possibility.

Early signs indicate they may not get their wish.

The Chinese fear that if Trump was willing to toss aside years of delicate negotiations with allies and decades of American trade policy,

he could also go his own way on issues he has staked out with Beijing, including Taiwan and the South China Sea.

As if to bolster that point, on Monday — the same day that Trump withdrew from the Trans-Pacific Partnership, the 12-nation trade agreement —

his spokesman said the US would prevent China from accessing islands it claimed in the South China Sea,

a threat one nationalist Chinese newspaper had already warned would mean war.

“This shows that Trump might act on his words,” Deng Yuwen, a public affairs commentator in Beijing, said in an interview.

“With previous presidents, their election promises weren’t taken so seriously.”

He added, “That means China must take his other warnings more seriously, especially about the South China Sea and Taiwan” …”

Trump’s policies towards China are completely inconsistent and mutually contradictory —

which is a major reason they have created a situation of frightening volatility.

“Trump’s goal in squelching the trade agreement was to protect American jobs and businesses.

His trade officials have argued that the deal does not do enough to help the United States or to contain China, which was not invited to join the agreement.

But in killing an agreement designed to limit China’s vast economic reach in Asia and anchor America’s presence in the world’s fastest growing region,

Only last week, Xi was trying on the mantle of global leadership at the World Economic Forum in Davos, Switzerland, suggesting that

with the United States in retreat, China was prepared to step up as a champion of free trade and protector of the global environment …

“This is indeed a big win for China in the struggle for global leadership,”

“Trump is surrendering this opportunity to prove the continuing relevance of American primacy.”

That agreement would exclude the United States and would reduce or eliminate tariffs on trade among China, Southeast Asian nations, Australia, India, Japan, South Korea and New Zealand.

It includes few of the features of T.P.P. that would have been most awkward for Beijing,

such as protections for independent labor unions and the environment, and requirements that state-owned enterprises behave more like commercial enterprises.

The agreement has stalled on rifts between Southeast Asian nations and the others,

but Thailand’s minister of commerce, Apiradi Tantraporn, said Monday that the talks “are expected to be expedited” without the T.P.P.

But the end of the T.P.P. will not be Trump’s last word on trade with China.

His trade officials say they expect greater access to the Chinese market in exchange for the easy access Chinese goods have to the United States.

And they appear prepared to risk a trade war, an expanding tit-for-tat contest of tariffs and other trade restrictions, to get it.

starting with heavily subsidized products such as steel and aluminum, imported into the United States …

While Trump’s advisers say that China has more to lose than the United States in a trade war,

They had developed lists of punitive options they would take against the United States if Washington took the initiative, they said.

“The signals are very clear: If this is going to be a trade war, China will reduce imports of American aircraft from Boeing and agricultural products,”

“We can turn to Europe, Australia and Canada for those products.

And we know that 20 to 30 of the states in the United States with big agricultural lobbies and Boeing plants will be putting pressure on Congress.”

A long-serving American trade expert in China agreed, saying China was prepared to go to the mat.

“Trump’s trade team would be wise to shelve ‘The Art of the Deal’ and focus on the ‘Art of War,’ if they really want to know what’s ahead in U.S.-China trade relations,”

said James Zimmerman, a managing partner of the Beijing office of the law firm Sheppard, Mullin, Richter & Hampton who has worked in China for 19 years.

“China views Trump as a paper tiger that will likely back down on the complicated, thorny issues that are not negotiable.

““In a year of political transition, Xi cannot afford to come across as weak,”

said Paul Haenle, the director of the Carnegie-Tsinghua Center for Global Policy in Beijing, who served as China director for the National Security Council under President George W. Bush and President Barack Obama.

“Taiwan is the core of core issues for China — a bottom line. Many Chinese stress that it is nonnegotiable.”

For now, at least, the increased contention with Washington is likely to strengthen Xi’s political hand at home by rallying public and elite support against a foreign threat,

“Short term, it will almost certainly give the Chinese government a boost in its public support,” Dr. Pei said in a telephone interview.

“It helps Xi, because whenever there is such pressure from outside, Chinese officials tend to rally around the top leader.”

Trump has also threatened China on control of territory it claims in the South China Sea.

The comments by Trump’s press secretary, Sean Spicer, on Monday echoed those made by his nominee for secretary of state, Rex W. Tillerson, at his Senate confirmation hearing.

While Trump has not explained how he will keep China off islands where it has built airstrips and installed weapons, the comments by his appointees suggest the possibility of an American blockade.

Indeed, while Obama tried unsuccessfully to leverage American allies in the region to compel China to back down,

Trump seems willing to abandon them and face China on his own.

who said such a blockade would be tantamount to war.

would not participate in such a venture, its defense officials said,

adding that a blockade could not be successful and

could serve to persuade disenchanted American friends in the Asia Pacific to pivot toward China.”