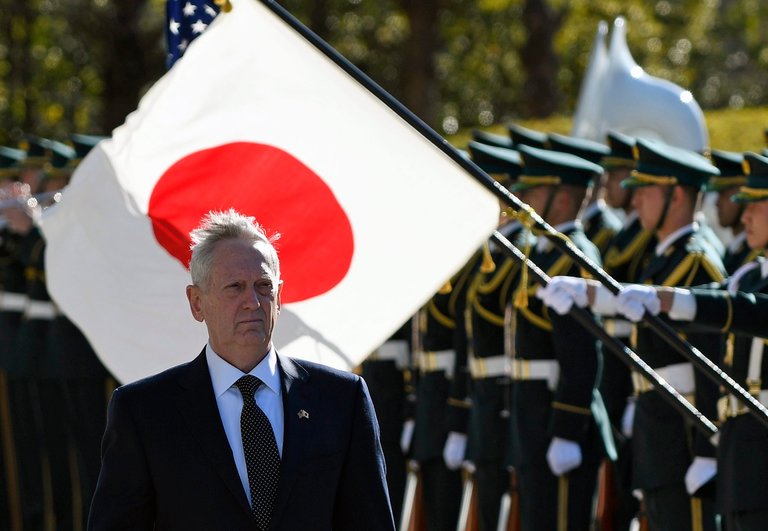 Defense Secretary Jim Mattis’s assurances to Tokyo about the Daioyu / Senkakus – and South Korea about an anti-missile defense system – prompted China to accuse the US of putting regional stability at risk. Unfortunately, they’re right.

that the US would defend two uninhabited islands in the East China Sea that Japan controls but China also claims as its own,

and over which the two countries have been acrimoniously sparring for several years.

America’s defense obligations to Japan extended to the disputed rocky outposts, known in China as the Diaoyu and in Japan as the Senkaku.

The chief spokesman for China’s Foreign Ministry, Lu Kang, accused Mattis of putting regional stability at risk and urged him to forgo what he called a Cold War mentality.

“We urge the U.S. side to take a responsible attitude, stop making wrong remarks on the issue involving the Diaoyu islands’ sovereignty,

and avoid making the issue more complicated and bringing instability to the regional situation,”

Lu said in a statement posted on the ministry’s website.

He described the 1960 defense treaty between the United States and Japan, which Mattis cited in pledging to defend the islands,

as a “product of the Cold War, which should not impair China’s territorial sovereignty and legitimate rights.”

Mattis was not staking out a new American position;

while in office, President Barack Obama said the US would defend the islands.

But the defense secretary’s words were reassuring to Japanese officials,

suggesting he might reduce America’s military commitments to its Asian allies.

The disputed islands have been among a number of potential points of contention as China builds up its presence in the East and South China Seas.

Chinese and Japanese vessels regularly maneuver at close quarters in the waters as China tries to challenge Japan’s control of the islands.

Last year, China sent a warship to within 24 miles of the islands.

President Xi Jinping of China declared much of the East China Sea to be a Chinese air defense zone in 2013,

and since then China has regularly sent fighter jets to patrol the area.

At a news conference in Tokyo, Mattis cited Article 5 of the United States-Japan treaty,

which commits the United States to defend Japan or territories that it administers against attack.

the U.S. will continue to recognize Japanese administration of the islands,” Mattis said.

“And as such, Article 5 of the U.S.-Japan security treaty applies.”

Before going to Japan, Mattis went to South Korea to offer assurances to that ally about defense commitments, and China’s reaction was similar.

one that Mattis said was intended to protect the country from North Korea’s nuclear threat.

“We firmly oppose” the deployment, Lu said at a regular news briefing.

“will undermine the strategic balance,” he said.

China has threatened South Korea with economic consequences if it agrees to the deployment of the system,

With the South Korean government in disarray and a presidential election coming there,

the Chinese government has been wooing the opposition Minjoo Party, which opposes the Thaad deployment.

Officials of that left-leaning party have visited Beijing twice in recent months, offering reassurances that they oppose the system.

The conversation, which the ministry said was initiated by the White House,

appeared to be a preparatory step for a call between Xi and Trump.

Flynn said the US was committed to “developing strong and powerful U.S.-China relations” and “properly managing the sensitive issues,” the ministry said.

For his part, Yang emphasized the two countries’ “broad common interests and great cooperation potential,” according to the ministry.

Trump criticized China on a variety of fronts during the presidential transition,

but the White House has had little to say DIRECTLY about the country during the president’s first two weeks in office.

And although Trump has held phone conversations from the Oval Office, several of them stormy, with a variety of world leaders, Xi has not been among them.

There has been speculation among diplomats in Beijing and among American business groups in Washington that the two leaders would talk by phone in the coming days.

Yang and Flynn last spoke in New York, a month after the presidential election, and from Yang’s point of view the meeting was not helpful.

the One China policy, under which the United States recognizes the government of Beijing and not Taiwan, was far from sacrosanct.

“I don’t know why we have to be bound by a One China policy unless we make a deal with China having to do with other things, including trade,” Trump said on Fox News.

Although there was no indication Trump was reacting to anything Yang had said to Flynn,

the episode was embarrassing for the Chinese official so soon after their meeting.

The Chinese have since stressed on several occasions that the One China policy is not negotiable.