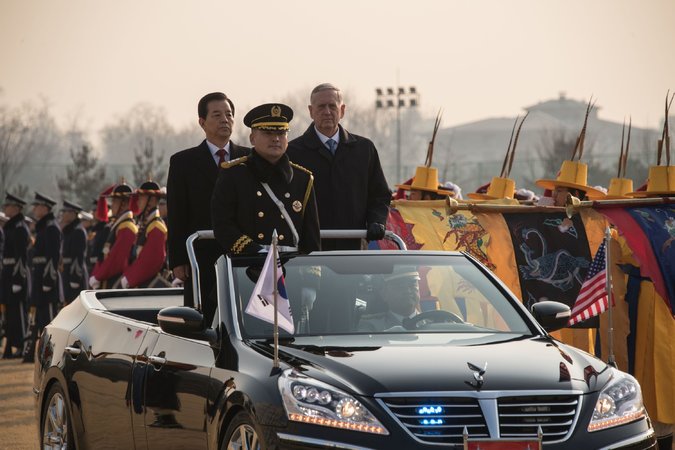 the United States would stand by its mutual defense treaty with the country,

despite statements by President Trump during last year’s campaign

that suggested he might pull back from American security commitments in Asia.

“I want there to be no misunderstanding during the transition in Washington that we stand firmly, 100 percent, shoulder to shoulder with you and the Japanese people,”

Mattis said at the start of a meeting with Prime Minister Shinzo Abe.

Trump, when he was running for president, had complained that the defense treaty was one-sided,

unless Japan did more to compensate Washington for helping to defend its territory.

“You always have to be prepared to walk,” Trump said in August.

“I don’t think it’s going to be necessary. It could be, though.”

With North Korea threatening to test an intercontinental ballistic missile

and China claiming sovereignty over nearly all of the South China Sea,

the Trump administration is now emphasizing its “ironclad” commitment to the security of Japan and South Korea.

Still, Trump’s conflicting signals and his transactional approach to diplomacy have made allies nervous.

So even as the president shakes up Washington,

Mattis has scored points in Asia by emphasizing that

the United States’ relationship with its allies has not fundamentally changed.

In Japan, that included assurances about Article 5 of the treaty,

which commits the United States to helping defend territory that Japan administers should it be attacked.

“Due to some of the provocations out of North Korea and other challenges that we jointly face,

as it was a year ago, five years ago, and as it will be a year and 10 years from now,” Mattis told Abe.

Japan hosts about 50,000 American troops on bases throughout the country, and it relies on the American nuclear umbrella.

Given that the alliance has lasted since the end of World War II, analysts said

it was somewhat surprising that it would be necessary to reassure Japan that it remained solid.

“It’s sad that we’ve even come to this point,”

said Jeffrey Hornung, a fellow in the security and foreign affairs program at Sasakawa Peace Foundation USA, a research institute based in Washington.

“But in the context that we’re in, that reassurance is very important.”

A particular concern for Abe, who is scheduled to meet with Trump in Washington next week, is

confirmation that the United States would defend Japan in any confrontation with China,

over a set of disputed islands in the East China Sea,

known in Japan as the Senkaku and in China as the Diaoyu.

during a visit to Tokyo three years ago that

the security treaty obligated the United States to do so,

the first president to state that commitment publicly.

Mattis did not explicitly mention the islands publicly Friday,

but American officials said later that he had reiterated the US “longstanding” position on the islands in his private meeting with Abe.

Mattis made a point of saying on Friday that he had served on the Japanese island of Okinawa as a young Marine.

Abe, for his part, said it was important that Japan was one of the first places Mattis had visited as defense secretary.

where he sought to reassure officials that

the American commitment to defend their country,

particularly in the face of North Korea’s accelerating nuclear threat,

“Any attack on the United States, or our allies, will be defeated,”

“And any use of nuclear weapons would be met with a response that would be effective and overwhelming,” he added,

using a formulation that has been employed by previous Pentagon chiefs.

China has objected to the deployment of the system, known as Thaad,

Mattis did not specify when the Thaad system would be deployed.

American and South Korean officials have said that it would be before the end of the year,

though American officials would like to see the timetable accelerated.