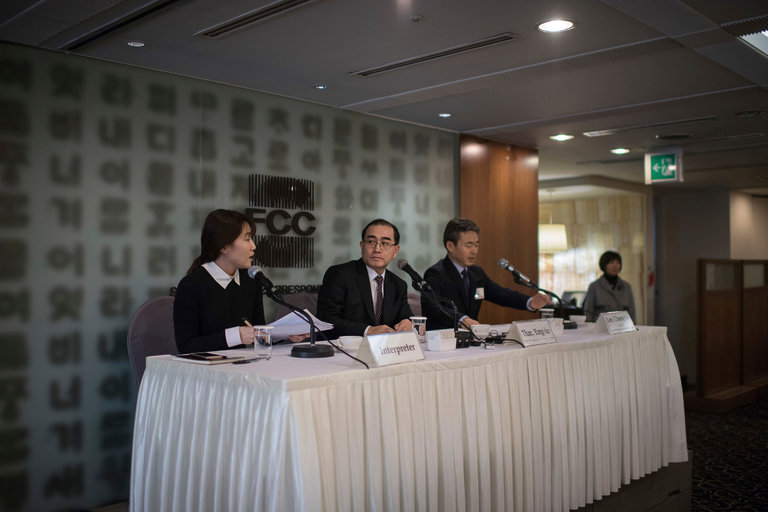 Thae Yong-ho, middle, the highest-ranking North Korean official in years to flee, said In Seoul on Wednesday that the regime’s nuclear ambitions remain central, even as its control was weakening due to increasing corruption and popular discontent.

The highest-ranking defector from North Korea in years said on Wednesday that the days of the country’s leadership were “numbered,” and that

its attempts to control outside information were not working because of corruption and discontent.

“I am sure that more defections of my colleagues will take place, since North Korea is already on a slippery slope,”

the defector, Thae Yong-ho, said during a news conference in Seoul, the capital of South Korea.

“The traditional structures of the North Korean system are crumbling.”

Thae had been the North’s No. 2 diplomat in London until he fled to the South last summer with his family …

After months of debriefing by the authorities in South Korea,

North Korea was determined to be recognized as a nuclear power, just as India and Pakistan are.

Thae said Kim wanted to negotiate a nuclear compromise, under which

in return for a moratorium on North Korean missile and nuclear tests.

But such a deal would validate Kim’s argument that

he had been forced to develop nuclear weapons as a reaction to American hostility, Thae said.

1) North Korean nuclear aspirations and 2) the constant and nearly-unrestrained China-bashing of Trump and cronies.

Put bluntly, North Korea’s nuclear ambitions so far have been held in check by China.

But the on-going attacks by Trump and his pals are going to make the Chinese leadership increasingly UNWILLING to restrain the Kim regime.

they continue to explicitly criticize China for being “insufficiently tough” in controlling North Korea.

In a general context of hostility and confrontation,

any explicit call for China to put a brake on Kim will only backfire.

Put simply, it will bring about a huge loss of face for the Chinese,

which, in turn, will make them even LESS likely to comply with US wishes …

“On Wednesday, Thae warned against compromising with the North, arguing that sanctions were effective.

In recent interviews with South Korean news outlets, he said that

after Britain froze accounts last year held by its state-run insurance company as part of sanctions recommended by the United Nations.

Until then, the company had claimed large insurance payments through fabricated documents, he said …

Defectors from the North, as well as some conservative analysts and policy makers in the South, widely share that view.

Still, it signaled a drastic change of roles for Thae.

Before his defection, he was a career diplomat, fluent in English, who had served in Britain, Denmark and Sweden,

In the South, Thae, now affiliated with the Institute for National Security Strategy, a think tank arm of the National Intelligence Service,

has vowed to spend the rest of his life trying to bring down the North Korean government.

Thae said he had high expectations when Kim took power after the death of his father, Kim Jong-il, in 2011.

Schooled for several years in Switzerland, Kim was expected to help modernize his impoverished country.

Instead, he resorted to a “reign of terror” by executing scores of officials,

including his uncle Jang Song-thaek, whom he thought posed a challenge to his power, Thae said.

The former diplomat said he had come up with a detailed plan for his defection,

first ensuring that his two sons joined him and his wife in London.

(North Korean diplomats are required to leave a child in the North, a measure intended to prevent their defection.)

The best way to force change in the isolated North, he maintained, is to disseminate outside information there to help ordinary citizens eventually rebel.

South Korean TV dramas and movies smuggled from China are already popular in the North, he said.

Another sign of Kim’s weakening control, Thae said, is evident at the unofficial markets in North Korea where women trade goods, mostly smuggled from China.

The vendors used to be called “grasshoppers” because they would pack and flee whenever they saw the police approaching.

Now, they are called “ticks” because they refuse to budge, demanding a right to make a living, Thae said.

Such resistance, even if small in scale, is unprecedented, he added.

because his government “can be held in place and maintained only by idolizing Kim Jong-un like a god,” Thae said.

“If he tries to introduce a market-oriented economy to North Korean society,

then there will be no place for Kim Jong-un in North Korea, and he knows that.”

in exchange for freeing smugglers and people caught watching banned movies and dramas.