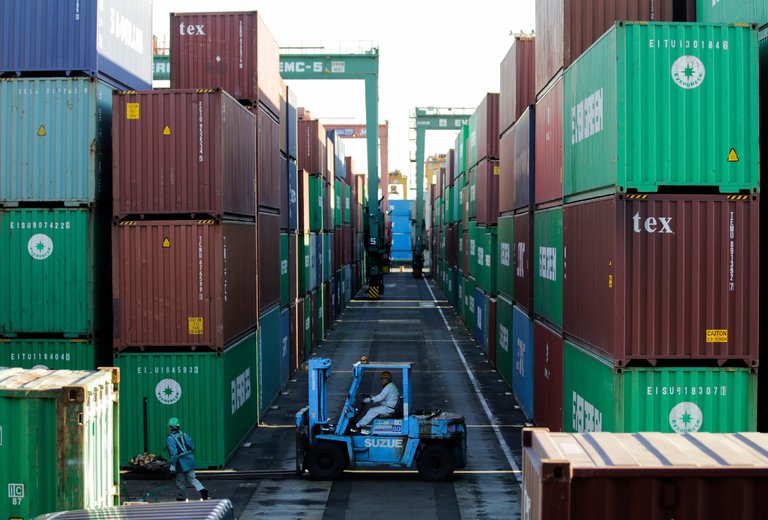 A container terminal in Tokyo. The death of the TPP could force Japan to negotiate one-on-one with the US, provoking potentially bruising showdowns. Trump’s ill-thought-out and out-dated views on trade de-stabilize relations with all East Asia – not just China

when many Americans saw Japan as an untrustworthy economic adversary.

The U-turn is a setback for Japan’s prime minister, Shinzo Abe.

Abe viewed the Trans-Pacific Partnership as a way to advance two cherished goals:

the trade deal, known as TPP, does not include China, the region’s increasingly bristly superpower —

Such is Abe’s enthusiasm for the deal that his government finished ratifying it on Friday,

just before Trump’s inauguration, despite Trump’s promise to withdraw.

Trump has repeatedly said he wants to alter the American trade relationship with Japan,

in which Japan sells far more goods to the United States than it buys in return.

In a meeting with executives from Ford Motor and other American manufacturers this week,

the president again said that such an imbalance was “not fair.”

And Trump says he wants to pursue trade agreements with individual nations, in lieu of group deals like TPP,

which would have included countries comprising as much as 40 percent of the world’s economic output.

but pressure to go along with Trump’s approach will be strong.

“Japan may eventually agree to bilaterals with the U.S. to ensure that the U.S. stays engaged in Asia —

both economically and to provide a security counter to China,”

said Glen S. Fukushima, a former United States trade official who is now a senior fellow at the Center for American Progress, a think tank in Washington.

Officially, Japan has not given up on the TPP, or on keeping the United States involved.

The day after Trump signed his executive order committing to withdrawal,

Abe said in Parliament he would “resolutely continue to seek understanding” from Washington of the deal’s strategic and economic importance.

Abe’s advisers express hope that members of Trump’s cabinet with business and national security experience will lend their voices to the effort.

encouraged Abe this week to take a two-pronged approach.

Abe, he said, should try to keep the deal alive while engaging the United States directly, if necessary,

“with the goal of eventually broadening negotiations to a multilateral level.”

Barring a drastic change in Trump’s views on trade, however,

that could mean stringing matters out for years — possibly until the next administration, if not longer …

But none of Japan’s other trade options serve Abe’s goals the way TPP does.

Japan and others could move on without Washington,

which would require changing a condition that requires the United States to ratify the deal before it can take effect.

Prime Minister Malcolm Turnbull of Australia said on Tuesday that

he had been promoting that idea to Abe and several other leaders.

Japan, with the second-largest economy in the group, after the US, would be a crucial participant.

But it could be politically awkward for Abe, who sold the deal on the merits of American involvement.

Even on narrow commercial grounds, he would have some explaining to do:

for cheaper access to the vast US market for cars and other manufactured goods.

With the US out of the picture, Abe could be accused of selling out farmers for little gain.

Japan is negotiating other deals.

One, with the European Union, predates Abe’s embrace of the TPP, in 2013, but talks had been put on hold.

European negotiators want concessions on agriculture, too — another reason Japanese farmers are not breathing sighs of relief.

In at least one area, dairy products, European demands go beyond what Japan agreed to in the TPP.

But that effort is being led by China, which has that partnership’s largest economy.

China’s rise represents perhaps the biggest change from the United States-Japan trade battles of a generation ago.

For Japan, it is both an added risk and a potential buffer.

Many in the Abe administration hope that Trump will target China first, making Japan a lower priority,

said a senior government official involved in trade matters, who asked for anonymity to discuss a sensitive issue.

Companies, however, are dusting off their 1980s playbooks.

investments that Akio Toyoda, president of Toyota Motor, and others have made a recent point of highlighting.

Only about a quarter of the Japanese-brand cars sold in the United States are imported,

though Japan remains the source for many high-value components as well as design work.

One of Trump’s complaints about Japan, repeated for decades by American trade negotiators, is that

its economy is organized to keep foreign products out even without overt trade barriers like tariffs.

By this logic, American carmakers have failed to penetrate the Japanese market because dealers and regulators collude against them —

even though Japan imposes no border taxes on cars, while the US adds a 2.5% levy to most imported Japanese vehicles.