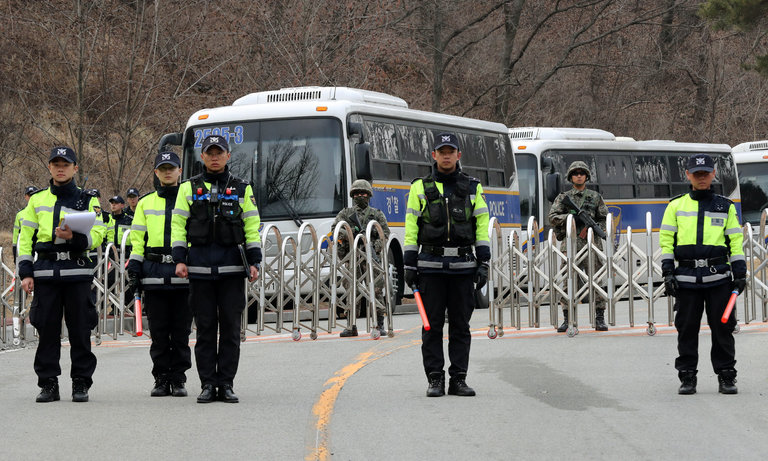 Pyongyang’s determination to pursue a nuclear program and Seoul’s push to deploy a U.S. missile defense system have put Beijing in a difficult bind. Trump’s general bluster – and specifically Bannonite anti-Chinese rhetoric – only make things more tense. Top, a protest in July in Seoul, South Korean capital, against deployment of the missile defense system, called THAAD. Bottom, South Korean police officers and soldiers on Wednesday guarding the site where the US system is set to be deployed.

“The Chinese government is ratcheting up pressure on South Korea over its plans to deploy an American missile defense system,

and threatening diplomatic and even military repercussions.

China’s latest pronouncements follow months of not-so-subtle punitive measures that have already taken a toll on the South Korean economy,

including an unofficial ban on Korean television shows and pop stars.

a sign of how recent advances in the North’s nuclear program have put China in a bind and are upsetting the regional security balance.

On Thursday, the US and South Korea began talks in Seoul to finalize details of the deployment of the so-called Terminal High-Altitude Area Defense System, or THAAD,

according to the South’s Foreign Ministry.

but China has objected strongly to the system, which it sees as an American attempt to encircle it.

No date has been set for the system’s deployment,

but the Pentagon said on Wednesday that Defense Secretary Jim Mattis wanted it in place “as soon as feasible.”

China responded with anger when South Korea agreed in July to accept the THAAD system,

and it has made its displeasure known as plans have moved toward the final stages in recent days.

An outspoken Chinese general, Luo Yuan, now retired, recommended a tough series of responses in an article on Thursday,

going so far as to suggest a military strike against the missile system.

“We could conduct a surgical hard-kill operation that would destroy the target, paralyzing it and making it unable to hit back,”

“Since the United States, Japan and South Korea choose not to respect China’s major security concerns,

China does not need to be a gentleman on everything,” the general wrote.

People’s Daily, the Communist Party newspaper that is often considered the official voice of the leadership, said in its international edition this week

that China should consider a “de facto” severance of diplomatic ties with South Korea.

and that it should consider coordinating with Russia in dealing with what it called the “U.S.-Japan-South Korea antimissile network.”

The paper was referring in part to statements by Japan that it might consider using THAAD as a defense against North Korea.

China has said that the THAAD system would threaten its nuclear deterrent capacity.

and would give the American military much more time to intercept them.

Much of China’s anger has been borne by Lotte, a South Korean conglomerate,

which provided the government with land for the THAAD deployment in a deal that was finalized this week.

Lotte has stores and shopping malls across China,

and modest groups of mostly older Chinese held protests at the company’s outlets in several cities on Thursday.

On Wednesday, the Lotte website serving Chinese shoppers was hacked, the company said.

On Thursday, another hacking attack shut down its duty-free shop’s website for several hours.

Lotte also said that some construction had been stopped by the Chinese authorities on the grounds that it had failed a fire inspection.

In recent months, popular South Korean stars have been denied visas to perform in China,

and South Korean TV shows have been blocked from Chinese video streaming websites.

Many in South Korea say they believe those actions are in retaliation for the THAAD issue, though China has denied any link.

One of the musicians denied a visa was Sumi Jo, a coloratura soprano who has toured China almost every year for the past decade.

Her brother, Jay Jo, said that she had been unable this year to get the government-approved invitation letter required for an entry visa.

“As soon as the opportunities reopen, she will resume her concerts in China,” Mr. Jo said.

“But right now, we have no idea when that will happen.”

and Beijing would probably be reluctant to damage those ties during the current economic slowdown.

when many expect presidential elections to be held in the South.

President Park Geun-hye was impeached by South Korea’s legislature in December over a corruption scandal,

and she awaits a ruling by the country’s Constitutional Court on whether she will be permanently removed from office.

The court’s decision is expected in the coming weeks, and if it rules against her, a new president will be elected 60 days later.

South Korea’s progressive opposition is seen as having a strong chance of winning the presidency should that election be held.

Opposition politicians have expressed skepticism about the THAAD system,

to ensure that it is completed before a new president takes office.

Members of the largest opposition party, the Democratic Party, have visited China twice since August.

In January, in an unusual development, a delegation from the party met with the Chinese foreign minister, Wang Yi.

China had hoped it could persuade the South’s next president to refuse to agree to THAAD,

“Now China is afraid THAAD will be deployed before the new president of South Korea is in office,” he said.

Even as China’s fury toward the South is on full display, it is also at odds with the North.

A North Korean diplomat, Ri Kil-song, arrived in Beijing on Tuesday for five days of talks,

an apparent effort by Pyongyang to reach out to China, its economic and political benefactor.

Ri and Wang, the Chinese foreign minister, made soothing public statements on Wednesday about the “traditional friendship” between their two countries.

Behind the scenes, though, things are unlikely to have been so smooth.

Last month, China suspended its imports of North Korean coal for the rest of the year,

of Kim Jong-nam, the estranged half brother of the North Korean leader, Kim Jong-un.

South Korea has accused the North of carrying out the attack.

The killing may have been taken as an affront by Beijing because the victim had lived in Macau, a Chinese special administrative region.

and some analysts have speculated that China saw him as a potential replacement for his erratic half brother.

“One thing after another is happening,” Cheng, the Renmin University professor, said of China’s simultaneous troubles with the Koreas.