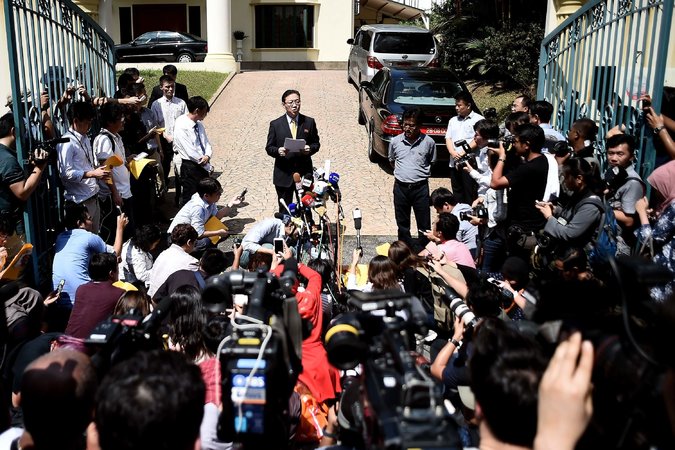 For years, Malaysia has given North Korea rare freedom for its citizens to visit, work and live. Now that freedom appears to be over — and the North Korean Embassy is at the center of a murder investigation that is upending the cozy diplomatic relationship between the two countries: two North Koreans sought in the death of Kim Jong-nam have taken diplomatic refuge there. Here, Kang Chol, North Korea’s ambassador to Malaysia, speaking to reporters outside the compound last week.

For years, North Korea has enjoyed the freedom for its citizens to visit, work and live in Malaysia,

a rare privilege for a nation considered an outlaw by most of the world.

Now that freedom is in danger, with the North Korean Embassy in a suburb of Kuala Lumpur, the Malaysian capital,

at the center of a murder investigation that is upending the cozy diplomatic relationship between the two countries.

Malaysia moved to punish North Korea on Thursday for the airport assassination of Kim Jong-nam, the half brother of the North’s leader,

saying that it would require visitors from that country to obtain visas, the government said.

Until now, North Koreans have been able to enter Malaysia without a visa —

one of the few places in the world that had allowed such easy access for citizens of a country that is widely viewed as a pariah.

About 1,000 North Koreans live and work in Malaysia,

where they have been able to establish international companies

For their part, Malaysians can visit North Korea without a visa, but few have reason to go.

With such an imbalanced relationship, Malaysia may have little to lose by severing ties with North Korea

if it continues to deny the police access to the suspects.

It was unclear whether the visa order would affect North Koreans who are already in Malaysia.

Relations between the two nations have rapidly deteriorated since the killing of Kim and accusations that North Korea was behind the crime.

have taken refuge in the embassy and are refusing to cooperate with the police.

Their stance is presenting the Malaysian authorities with a daunting challenge as they try to crack a case with major international ramifications.

One of the two men, Hyon Kwang-song, is a high-ranking embassy employee who claims diplomatic immunity and, as a result, is untouchable by the police.

The other, Kim Uk-il, an employee of the state-owned airline, Air Koryo, is safe from arrest as long as he remains on the embassy grounds —

unless relations sour to the point that Malaysia and North Korea cut diplomatic ties and the embassy closes,

in which case he could be immediately arrested.

Intelligence services, including the C.I.A., routinely assign agents to work in foreign embassies in the guise of diplomats,

largely because of the protections of diplomatic immunity.

Governments sometimes expel these agents when espionage is uncovered.

But it is rare for someone working under diplomatic cover to be linked to a murder and for a government to seek an arrest.

The police say Kim Jong-nam was assassinated by two women who rubbed VX nerve agent on his face.

Siti Aisyah, 25, of Indonesia, and Doan Thi Huong, 28, of Vietnam, were charged on Wednesday with his murder.

They have said they thought they were participating in a harmless prank.

and the Malaysian police have identified eight North Korean men as participants in the plot,

including Hyon, an embassy second secretary, and Kim Uk-il, the Air Koryo employee.

and to question whether the North should be allowed to have an embassy in Malaysia.

and questioned why the rogue state had ever been allowed to open its embassy in the first place.

He urged the government — sometimes known by the same name as its geographic location, Putrajaya — to downgrade relations with North Korea.

Malaysia has already recalled its ambassador there for consultations.

from which to carry out clandestine activities, circumvent U.N. sanctions and engage in all sorts of illicit enterprises to earn hard currency for the regime,”

he wrote in a blistering blog post this week.

Under the Vienna Convention, countries can declare a foreign diplomat “persona non grata.”

Malaysia is said to be considering that designation for Hyon and his superior, Ambassador Kang Chol,

who issued a strongly worded statement last week accusing Malaysia of colluding with South Korea in the Kim case.

Both Malaysia and North Korea have signed the Vienna agreement, which allows a country to waive immunity for its own diplomats.

This happens only rarely …