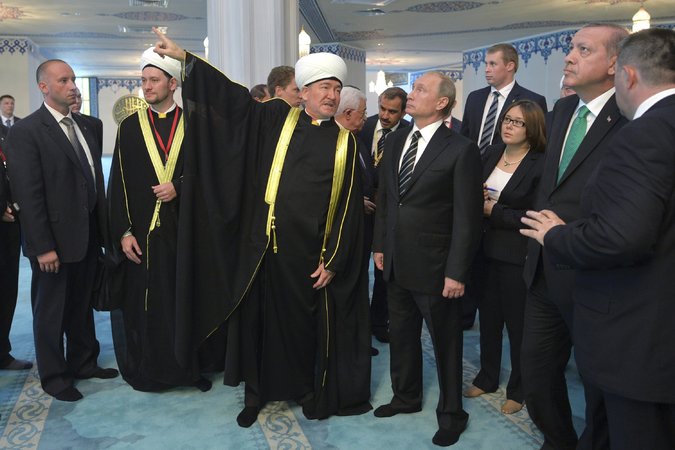 As ruler of a country with a large and politically active Muslim population, Putin avoids the term “radical Islamic terrorism” to emphasize the distinction from religion. In the US, by contrast, the relatively small Muslim population has shown almost no inclination towards violence or terrorism.

would seem to have found common language on fighting terrorism —

except on one point of, well, language.

During his campaign, Trump associated Islam with terrorism and

criticized President Obama for declining to use the phrase “radical Islamic terrorism.”

However, Putin, whom Trump so openly admires for his toughness, has, for more than a decade, done exactly what President Obama did.

He has never described terrorists as “Islamic” and has repeatedly gone out of his way to denounce such language.

“I would prefer Islam not be mentioned in vain alongside terrorism,”

he said at a news conference in December, answering a question about the Islamic State,

a group he often refers to as “the so-called Islamic State,”

to emphasize a distinction with the Islamic religion.

And, this being Russia, the failure to adhere to this Kremlin-determined interpretation is a prosecutable offense:

the reference is to a banned terrorist organization of that name, lest it be misconstrued as denigrating religion.

Putin does not take this stance to soothe the feelings of Western liberals, a group he dismisses as hypocritical in any case.

the Brookings Institution wrote in a study of the early formation of his counterterrorism policies.

and it is not the governments of majority Muslim countries such as Iraq and Iran, or the majority of Muslims living in Russia.

with the breakthrough in the Chechen war coming when the region’s imam, Akhmad Kadyrov, allied with the Russian military.

While embracing Islamic leaders as a centerpiece of its counterterrorism strategy, however,

the Kremlin did not avoid drawing distinctions along religious lines.

as a counterweight to the more austere [ and highly political ] Wahhabi approach professed by many separatists.

The Wahhabi strain was outlawed in another restive, predominantly Muslim province, Dagestan, and

its adherents are persecuted in Russia, rights groups say.

which have ceased to pose a serious security threat to Russia.

Orkhan Dzhemal, a commentator on Islamic affairs, said in a telephone interview, noting that

in the United States, in contrast, Muslims are not a powerful political force.

“He cannot say ‘Islamic terrorism’ for a simple reason. He doesn’t want to alienate millions of Russians.”

The term preferred in Russian political parlance is “international terrorism.”

In a phone call on Friday, Trump and Putin discussed “real cooperation” in fighting terrorist groups in Syria.

They could agree on an enemy.

But the Kremlin statement described a “priority placed on uniting forces in the fight against the main threat — international terrorism.”

Source: The Phrase Putin Never Uses About Terrorism (and Trump Does) – The New York Times