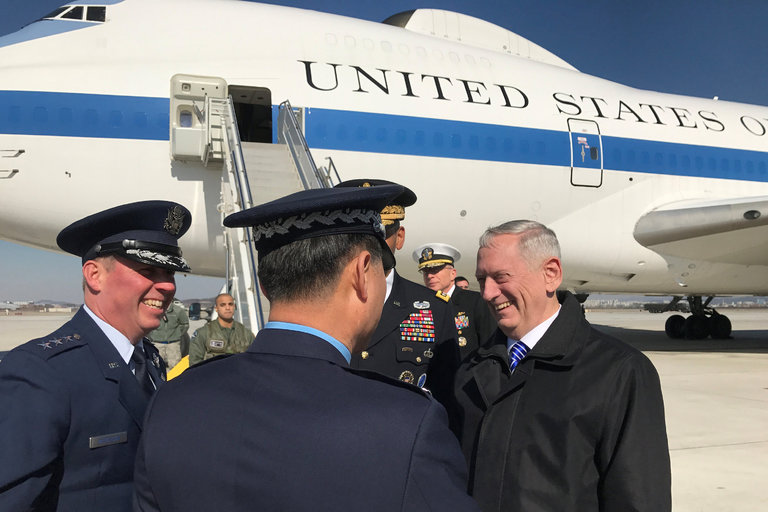 As long as Trump & Tillerson — aka TNT — keep picking unwinnable fights with China, Mattis can make all the reassurance trips he wants — but it’s unlikely to make much difference … East Asia is headed down the road to a completely unnecessary war of mutually assured destruction

Well, it’s weirdly appropriate to say on Groundhog Day, but

it’s probably already too late to stop the slide

started by the infamous duo of Trump and Tillerson, aka TNT.

In less than what used to be called a fortnight,

which is really saying something …

It’s good that Mattis is making these trips, of course …

But as long as TNT keep picking provocative and unwinnable fights with China,

And at the rate things are going, it’s going to happen a lot sooner than later …

And to make it worth reading all the way through,

at the end, some comments about the volatile domestic political situation in South Korea and regionally in East Asia,

“In his first mission to reassure an important American ally, Defense Secretary Jim Mattis arrived in South Korea on Thursday …

South Korea is a logical first stop for Mattis, who will also visit Japan on his whirlwind trip before returning to Washington.

East Asian nations have been concerned about the conflicting signals from President Trump,

which has made reassuring allies the first order of business for Mattis.

During his campaign, Trump mused the US could save money

comments that ran counter to DECADES of American nonproliferation policy.

Trump said on Twitter last month that North Korea would be stopped from developing the capability to reach the United States with a nuclear weapon.

But he did not say whether he was referring to taking military or diplomatic steps.

“It won’t happen,” he tersely declared of a North Korean missile test.

One of Trump’s first acts as president was to formally withdraw from the Trans-Pacific Partnership agreement,

which had been an important pillar of the Obama administration’s policy in the region.

The mixed messages — some spontaneous, some premeditated — coming from Trump & Tillerson

His trip was also reassuring for South Koreans,

who have become anxious over Trump’s accusations during his campaign

by not paying enough for the American military presence.

“In less than two weeks since taking office,

upending not only his predecessor Obama’s policies,

but also some of the longstanding American policy lines,”

said Go Myong-hyun, an analyst at the Asan Institute for Policy Studies in Seoul, the capital.

“In this context, Secretary Mattis’s trip, which serves to reaffirm the United States’ commitment to its allies, is an unexpected present.”

also poses a challenge, given that a presidential election may be held as early as the spring.

“Mattis is going to meet with people who probably aren’t going to be in office in a few months,“ said Joel S. Wit,

an expert on Korea at the School of Advanced International Studies at Johns Hopkins University.

Mattis will meet with an array of officials, including the acting president of South Korea, Hwang Kyo-ahn.

One crucial political issue in Korea is the Thaad antimissile defense system,

which is designed to intercept missiles like the North Korean Rodong.

The United States and South Korea initially said they wanted to deploy the Thaad system by the end of the year.

Given North Korea’s bellicose behavior, there has been some speculation that the air defense could be deployed sooner.

In his comments to reporters, Mattis made the case for deploying the system, without detailing how quickly that might happen.

“Thaad is for defense of our allies’ people, of our troops who are committed to their defense,” he said.

“Were it not for the provocative behavior of North Korea we would have no need for Thaad out here.

There is no other nation that needs to be concerned about Thaad.”

But key opposition leaders mindful of the possible election oppose the deployment,

while angering China, which could engage in economic retaliation if the system is deployed.

The Chinese have long objected to the deployment of limited missile defenses,

that would have the capability to defend against Beijing’s own nuclear deterrent.

“Thaad is a defense tool whose deployment should not be delayed any more,” Hwang said at a recent news conference.

“We are explaining our position in various ways to neighboring countries like China who are concerned about the Thaad deployment.”

Moon Jae-in, an opposition leader who is considered the front-runner among potential presidential candidates,

has argued that South Korea should use the Thaad program as diplomatic leverage with China,

keeping open the possibility that it would not be deployed

“Given our standoff with North Korea and its nuclear program,

our security and the alliance with the United States are our top priority,” Moon told reporters recently.

“But the best scenario for us is when the U.S. and China get along well.

If there is friction between the two, it’s not going to be easy for us.”

Mattis is not planning a trip to the demilitarized zone between the two Koreas.

Nor is he planning to meet with South Korea’s political opposition.

Mattis will meet with top American military leaders but is not scheduled to visit with American troops.”

a) very hard-line towards the North, being the party descended from the former military dictatorship … and …

is almost DOA because of that failure to meet with the opposition,

which has a different view than the incumbents of not only THAAD,

but also — and significantly — how to handle relations with China …

And that’s the crucial point overall —

if TNT continue to make provocation of China the fundamental tenet of their East China policy,

This is purely speculation …

Because the way it looks now,

while constantly poking China in the eye in a way