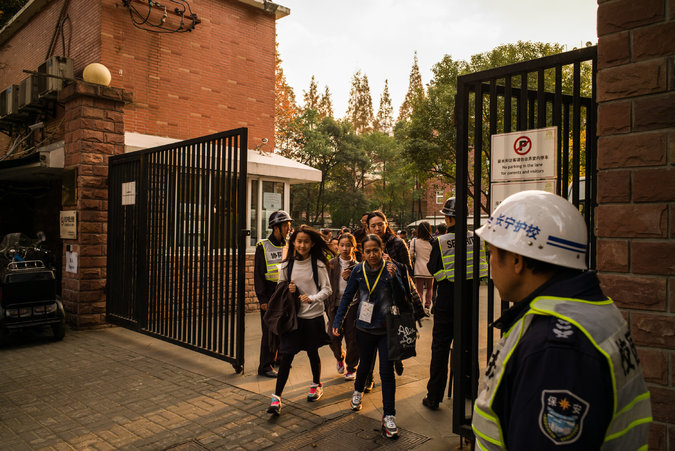 A city commission has accused private schools of replacing official curriculums, which stress political ideology, with others infringing on “China’s education sovereignty.”

“On Oct. 19, the Shanghai Municipal Education Commission summoned the principals of 21 local private schools to explain draft regulations that would restrict international programs in Grades 1 through 9, the years of compulsory education in China.

The commission accused schools that had replaced the officially mandated curriculum, which includes classes in political ideology, of “infringing on China’s education sovereignty.”

The commission said that under the proposed regulations the authorities would no longer approve the establishment of any new private schools with “foreign influence” and would “bar foreign investment in private schools.”

School curriculums would be monitored to ensure that they “uphold national sovereignty and ideology.”

Private schools could not be named after foreigners.

“The government has maintained tight ideological control over the universities, and high schools are entirely focused on test preparation, but there has been room for innovation in the grades 1-to-9 system,” Mr. Jiang said.

“As the Chinese economy slows and instability grows, the government wants to ensure maximum control in the classroom.”

According to the Ministry of Education, 256 private and 225 public schools in China provide international education programs for Chinese students who hope to continue their studies abroad.

These typically offer English or other courses students would need to prepare for foreign universities, instead of courses equipping them to take the gaokao, the Chinese college entrance examination.

Investment in private schools across China has surged in recent decades.

Education Ministry data from 2015 showed that China had 10,735 private schools offering grades 1 through 9, with more than 12 million students.

Driving the trend are wealthy families willing to pay for what they see as a higher-quality education.

Local government officials have accepted private schools as a way to provide more consumer choice as well as stimulate the local economy, despite concerns that they exacerbate social inequality …

This is not the first crackdown on Western values in Chinese education.

Later that year, the Communist Party’s propaganda department and the Ministry of Education pushed universities to revive Marxist education.

Jiang said that grades 1 through 9 were the most important for a child’s psychological and emotional development, which may explain the official focus on early education.

“It is a period when the children are most impressionable, and begin developing habits, values and modes of thinking,” Jiang said.

“China does not want a situation where its elite are too westernized.”

Jiang thinks there might be moves to discourage Chinese students from studying abroad in the near future — even though Mr. Xi’s own daughter attended Harvard.

But in a city like Shanghai, with a growing middle class that prefers choices in education and lifestyles, it is unclear exactly what effect the proposed regulations may have in the classroom.

What is clear is that they have already upset many parents.

“I think the Chinese education system is like an assembly line,” Ms. Wu said, explaining why she wanted her son to have an international education.

“If you conform, you’re fine. But if you’re different, you’re eliminated.”

“The day we parents sent our kids to private schools, we knew there was no way back,” she said.