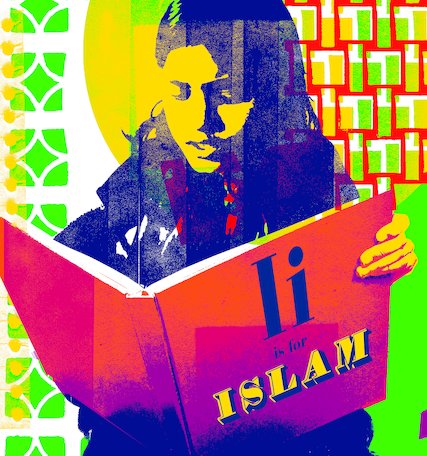 During the 1980s, religion was a matter of personal choice. No one batted an eye if you chose not to fast during Ramadan. But today, thanks to shows on cable TV, social media and group meetings, political Islamists have succeeded to an alarming degree in painting secularism as a threat to Islam. The latest battleground is the curriculum found in the country’s schools.

“When Bangladesh became independent from Pakistan in 1971, secularism was one of the new country’s founding principles.

It soon came under siege — first in the 1970s, under Ziaur Rahman, the founder of the Bangladesh Nationalist Party (B.N.P.),

who rehabilitated the Jamaat-e-Islami, a violent Islamist party disgraced for collaborating with the Pakistani army;

then in the 1980s, when the dictator Hussain Mohammed Ershad declared Islam as the state religion.

Since democracy was restored in 1991, the two leading parties have traded places running the country …

Over time, the B.N.P. invoked religious sentiment to broaden its appeal with an increasingly conservative population, forcing the now-ruling Awami League to play defense …

Indeed, despite a spate of attacks in 2015 and 2016 against liberal bloggers, academics and religious minorities —

the Awami League has been criticized for being apathetic and blaming the victim.

But it started cracking down hard after a massacre at a cafe in Dhaka last July,

in which several Westerners and secular Bangladeshis were killed, garnering international attention.

Even as the government tries to curb terrorism, however, in other respects,

it appears to waver between appeasing — and containing — nonviolent political Islamists,

such as the Hefazat-e-Islam, a network of madrasa leaders who hope to introduce Shariah in Bangladesh …

The battle to maintain a secular Bangladesh is both political and cultural.

Bangladeshis continually evaluate what they will or will not accept in the name of Islam.

In universities, as many women seem to wear jeans as hijabs.

But there has been a significant shift over the past few decades.

During the 1980s, religion was a matter of personal choice.

No one batted an eye if you chose not to fast during Ramadan.

Today, eat in public during the holiday and you may be chided by strangers.

Thanks to shows on cable TV, social media and group meetings,

Islamists have succeeded to an alarming degree in painting secularism as a threat to Islam.

It’s true that non-Muslim writers still appear in the revised textbooks, while some Muslim authors have been dropped.

But the exclusion of the great novelist Sarat Chandra Chattopadhyay, the Charles Dickens of Bengali literature,

is a galling concession to the sectarian view that Hindu writers like him do not belong on a Muslim curriculum.

A dark political calculation may be lurking behind these changes.

The Awami League, now in its second term after highly controversial elections in 2014, is now widely perceived to be authoritarian.

It would make sense for the party to pry Hefazat away from B.N.P.-Jamaat in order to reduce the impact of any future protests by its archrivals.

only it comes at a lasting cost to culture that has defined Bangladesh since its founding.

One of the casualties of the recent purge is the great poet Michael Madhusudan Dutt,

who wrote achingly about his belated embrace of his native language, Bengali.

In a poem read in schools during the 1980s, he says of the Kapotakkha, a river in southern Bangladesh,

“Many rivers I have seen in many countries/But none to quench the thirst of my longings.”

Most Bangladeshis see Bengali as the cradle of their national identity,

and Islamists have long sought to replace language with religion in that role.

To evict Dutt from our textbooks today is to strike at the heart of the secular cultural convictions that gave birth to the nation.”