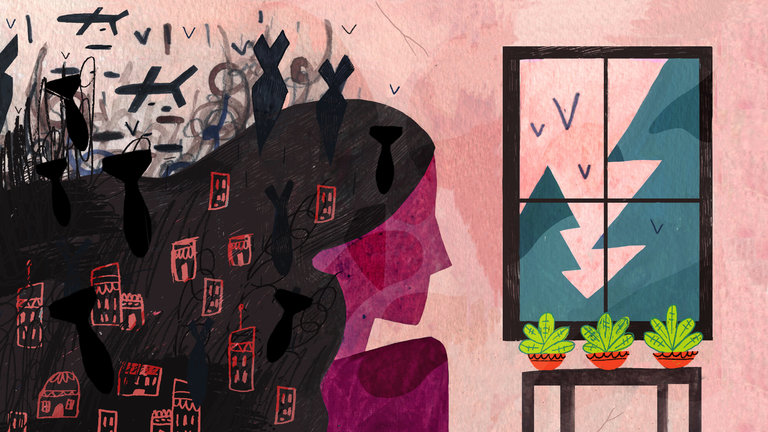 A married Yemeni college student wonders if she can survive a full year, even at idyllic Stanford, without seeing her husband – who would be barred by Trump’s ban on people from her country and six other Muslim majority nations. She fears the move will only increase hostility towards Americans, especially those living or traveling abroad.

“The day I left Yemen for the US this past fall was a fairly typical one.

On my way to the airport in Sanaa, I could hear the explosions of airstrikes.

Out the car window, I could see people standing in long lines to get water and gunmen stationed at security checkpoints.

It had been a year and a half since Yemen’s war broke out.

Somehow everyone I saw that morning had managed to survive the violence up to that point.

On my first morning in California — where I am attending Stanford University — I woke up to the sound of birds chirping.

The electricity worked in my dorm room, and when I looked out the window, I saw a street packed with students, walking, bicycling and socializing.

If this was a typical American morning, it really did feel like I had come to the land of freedom.

Education is hard to come by in Yemen.

Some universities have been destroyed, and others closed down after bombings.

At Stanford, though, I can take classes in anything.

I love my political science classes, especially one called “Rules of War,” which examines the justifications — ethical and otherwise — for violent conflict or intervention.

The emphasis on critical thinking is exhilarating.

And the days here are so full: I have friends from different countries, of all colors, backgrounds and religions.

The whole community is welcoming and supportive of everyone.

President Trump’s attempt to ban immigration from seven Muslim-majority countries including Yemen puts this America I love to the test.

The ban is currently on hold, blocked by a federal judge last week.

But the rules Trump is fighting for are arbitrary and unfair.

No refugee from any of the seven countries has committed a terrorist attack in the United States.

If anything, American involvement in most of these countries has only exacerbated the flow of refugees.

Last week, as I learned about Trump’s ban, I was hit by news that an American raid in Yemen had killed civilians, including an 8-year-old girl, Noura al-Awlaqi.

How can the United States kill Yemenis while simultaneously barring civilians from seeking refuge here?

Trump should end the use of military drones, or stop selling arms to Saudi Arabia.

This at least would engender more trust of the United States in Yemen,

since drones and the Saudi-led coalition have killed many civilians there.

The ban, if it is upheld, certainly won’t deter terrorism.

I am afraid it will make things only worse.

Radical groups will use this move to generate more hostility toward America,

which now appears to endorse discrimination against Muslims.

I am also worried for other Muslims who live here,

because Trump’s stance has increased hate crimes against immigrants like them.

Even if the ban lasts only a short time, it has already done great harm.

People come to this country because they seek protection, refuge, a better life.

But that doesn’t mean it is easy.

So many people in the countries targeted by the ban are in danger,

but leaving still means abandoning their homes and often their family.

My own decision to study in America was much easier, but still bittersweet.

I had to leave my family and my husband, whom I married only a year ago.

Even before the current uncertainty, it was very difficult for Yemenis to get into the United States,

so my husband and I knew we would face long periods of separation.

But I was planning to see him in Yemen during the summer while he works on the papers to visit me here.

Now we both have little confidence in that.

When I talked to my husband last week, he said: “Everything is going to be fine. Don’t do anything reckless by leaving the country and coming back home.”

He reminded me that I’m a strong woman and this education is the opportunity of a lifetime.

He joked with me, saying he was really sorry, but he just wouldn’t be able to make it to Stanford to help me through this.

I can’t imagine not being able to see him for another year, let alone four.

His optimistic spirit reminded me that Yemenis, exhausted as they are, and in the face of so much danger, still manage to laugh, to chat, to make jokes, as they move bravely through each day.

That level of courage in the face of fear is something I hope for Americans as well.

For so long, this country has been a beacon of freedom, equality and justice —

one the rest of the world admires.

This is the time for Americans to defend the values they stand for,

the values the world loves.”

V.O. by Hadil Mansoor al-Mowafak, a first-year student at Stanford.