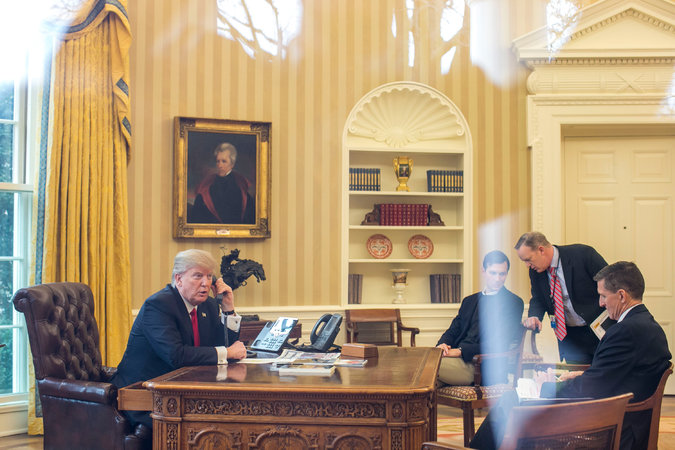 for, among other things, its unconstitutional interference with free exercise of religion and denial of due process.

Overlooked in the furor is another troubling aspect of the situation:

Trump omitted from his ban a number of other predominantly Muslim nations where his company has done business.

This adds further illegitimacy to one of the most arbitrary executive actions in our recent history,

The seven countries whose citizens are subject to the ban are relatively poor.

Some, such as Syria, are torn by civil war; others are only now emerging from war.

One thing these countries have in common is that they are places where the Trump organization does little to no business.

By contrast, other neighboring Muslim countries are not on the list,

even though some of their citizens pose just as great a risk — if not greater — of exporting terrorism to the US.

Among them are Saudi Arabia, the United Arab Emirates and Egypt.

But these three countries have exported terror to the United States in the past.

They accounted for 18 of the 19 terrorists who perpetrated the Sept. 11 attack on American soil —

an attack directed by another Saudi, Osama Bin Laden, with the assistance of an Egyptian, Ayman al-Zawahri.

These countries, unlike those subject to the ban, are ones where Donald Trump has done business.

In Egypt, he had two Trump companies registered.

In the United Arab Emirates, he had licensed his name to a Dubai golf resort and a luxury residential development and spa.

Some of these entities have since been closed, and others remain active.

A look at other nations with large Muslim populations only reinforces this troubling pattern.

Turkey, India and the Philippines could all pose similar risks as the banned countries of origin that concern the president.

Yet Trump has done business in all three places — they, too, are omitted from his list.

Our point is NOT, of course, that any of these other countries should be added.

A country-specific ban, which experts say is an ineffective way to combat terrorism, should not exist.

Our government should instead screen all immigrants for potential links to crime or terrorism, as it has long done.

Discrimination based on national origin is a thinly veiled attempt to discriminate on the basis of religion.

And indeed, President Trump has admitted that he wants to prioritize the settling of Christian refugees.

The arbitrary and discriminatory nature of this order is bad enough;

but if the president is also considering payoffs to the Trump organization, it’s much worse.

As we have pointed out in a lawsuit we have filed against the president in his official capacity,

payments to the president are not only unethical but unconstitutional

such as sovereign wealth funds and state owned banks.

The Emoluments Clause of the Constitution prohibits anybody holding a position of trust with the United States government, including the president,

from receiving economic benefits from business dealings with foreign governments.

Without Trump’s tax returns and other information about his privately held businesses,

that pose a terrorism risk but are not on his immigration ban list.

What we do know is that Trump has generally refused

And now, only a week into Trump’s term, we see the devastating consequences of this conflict of interest.

It appears that immigrants from countries that can afford to do business with the Trump organization are free to come and go from the United States.

Immigrants from countries that cannot afford such transactions may very well be detained at the airport and sent home, where some may perish.

After the election we often heard the phrase “to the victor belong the spoils.”

But there are ethical and constitutional limits to that maxim.

In this case, an already suspect immigration ban is subject to yet more doubt because Trump may be looking to his business interests

to study, earn a living, avoid persecution and, in some instances, to survive.”

Richard W. Painter, a professor at the University of Minnesota Law School,

is the vice-chair of Citizens for Responsibility and Ethics in Washington,

where Norman L. Eisen is the chair.

They were chief White House ethics lawyers for