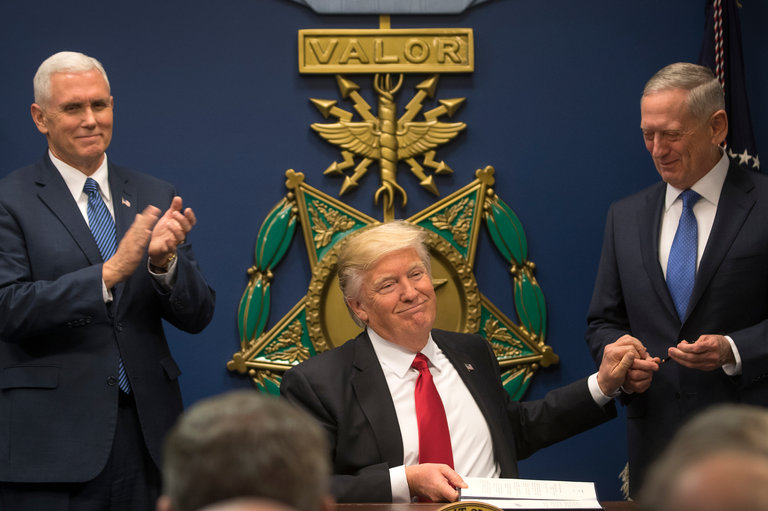 Predictable result of Trump directive — increasing legitimacy and credibility of political Islam, the soil that nurtures and sanctions  terrorism, which has not been a major problem in the US itself since 9/11. Trump’s ban only likely to increase a currently low-level danger – but maybe that’s the purpose

“Trump’s directive is unlikely to significantly reduce the terrorist threat in the United States,

which has been a minuscule part of the overall toll of violence since 2001.

On the contrary, many experts believe the order’s predictable consequences will make the threat worse.

While the order requires the Department of Homeland Security to issue a report within 180 days providing detailed statistics on foreign nationals who commit acts of violence,

the seven countries targeted in the order’s 120-day visa ban,

according to Charles Kurzman, a sociology professor at the University of North Carolina.

Of Muslim Americans involved in violent extremism of any kind —

for instance, charged with plotting terrorism or supporting a terrorist group —

only 23 percent had family backgrounds in those countries,

said Mr. Kurzman, who just published the latest of his annual studies of Muslim Americans and terrorism.

The larger point of experts is that jihadist attacks garner news attention that far outstrips their prevalence in the United States, and

but the visceral fears that terrorists set out to inflame.

There was a random quality to the list of countries:

It excluded Saudi Arabia and Egypt, where the founders of Al Qaeda and many other jihadist groups have originated.

Also excluded are Pakistan and Afghanistan, where persistent extremism and decades of war have produced militants who have occasionally reached the United States.

Nor did the list include the European countries where disenfranchised Muslim communities have become hotbeds of militancy,

leading to major attacks in Paris and Brussels in the name of the Islamic State.

Because no visas are required for travel by most European citizens to the United States, and because of the volume of tourism and business,

restricting travel from Europe would have been far more difficult and consequential than banning it from only the seven countries named.

By Kurzman’s count, 123 people have been killed in the United States by Muslim terrorists since the 2001 attacks —

So the order addresses, at most, one-1,870th of the problem of lethal violence in America.

If the toll of Sept. 11 is included, jihadists still account for just over 1 percent of killings.

“My advice to the new administration would be to declare victory,” Kurzman said.

For the average American, he added, “your odds of being victimized by a terrorist attack are infinitesimal”…

In the political realm, where emotions and symbols hold sway, Trump’s order may reassure some Americans that they are safer from terrorism,

and more generally, from concerns that Muslim immigrants may bring an alien culture.

While ostensibly addressing terrorism, it also says that the United States should be protected against those with “hostile attitudes toward it and its founding principles” or those “who do not support the Constitution.”

The trouble with such reassurance, even if it is effective, is that it comes at a high cost, in the view of many experts on terrorism.

That cost will be counted not just domestically but also abroad,

where the US relies on allies, including Muslim countries, for intelligence and other help against terrorism.

“In my opinion, this is just a huge mistake in terms of counterterrorism cooperation,”

“For the life of me, I don’t see why we would want to alienate the Iraqis when they are the ground force against ISIS.”

At home as well, Benjamin said, the president’s order is likely to prove counterproductive.

The jihadist threat in the United States has turned out to be largely homegrown, he said, and

the order will encourage precisely the resentments and anxieties on the part of Muslims that fuel, in rare cases, support for the ideology of the Islamic State or Al Qaeda.

“It sends an unmistakable message to the American Muslim community that they are facing discrimination and isolation,” Benjamin said.

That, he said, will “feed the jihadist narrative” that the United States is at war with Islam,

For an action aimed at terrorism, the order appeared to garner little or no support among experts and former officials of every political stripe with experience in the field.

Jonathan Schanzer, the vice president for research at the conservative Foundation for the Defense of Democracies, said that

if the temporary visa ban was used to review and improve immigration vetting procedures, it might be justified.

But he added that he knew of no obvious problems with those procedures,

and no specific plans to address such issues over the 120-day ban.

“The order appears to be based mainly on a campaign promise,” he said … “