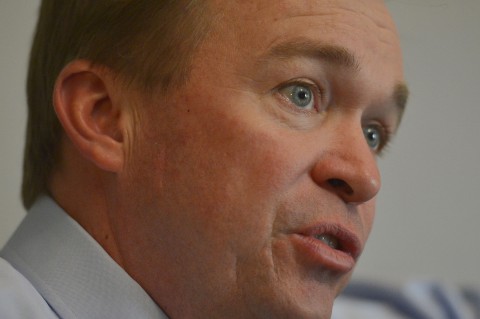 While the beginning of this piece is fairly pedestrian, albeit correct,

the headline is OUTSTANDING … and the second half, much of which quoted below, makes an important point clearly …

“Whatever their differences on line-item details, Mulvaney and the president-elect have at least one major thing in common:

an alarming openness to defaulting on the federal debt.

During the campaign Trump repeatedly flirted with the idea of defaulting on U.S. debt obligations.

In a CNBC interview in May, he suggested his experience in offloading private debt would translate nicely to federal obligations.

That is, he’d simply persuade the country’s creditors to accept less than full payment.

“I would borrow knowing that if the economy crashed you could make a deal,” he said.

When the financial press freaked out, he walked back the language — only to revive it a month later …

Mulvaney has also publicly questioned whether failing to raise the  debt ceiling would be such a bad thing,

and whether it would necessitate defaulting on our debt.

Raising the debt ceiling is about enabling the federal government to make payments that have already been promised, not new spending.

Refusing to increase this limit would call into question the country’s creditworthiness.

This flippancy about making full and timely payments on our debt would likely violate Section 4 of the 14th Amendment,

which says the “validity of the public debt of the United States . . . shall not be questioned.”

And from a purely financial perspective, it would be ruinous.

U.S. Treasurys, currently considered risk-free, are the benchmark of the global financial system.

They enjoy safest-of-safe status precisely because creditors believe they’ll be paid back in full.

Rattling the [ global ] public’s faith in our creditworthiness would set off an [ almost immediate financial ] crisis throughout the world.”