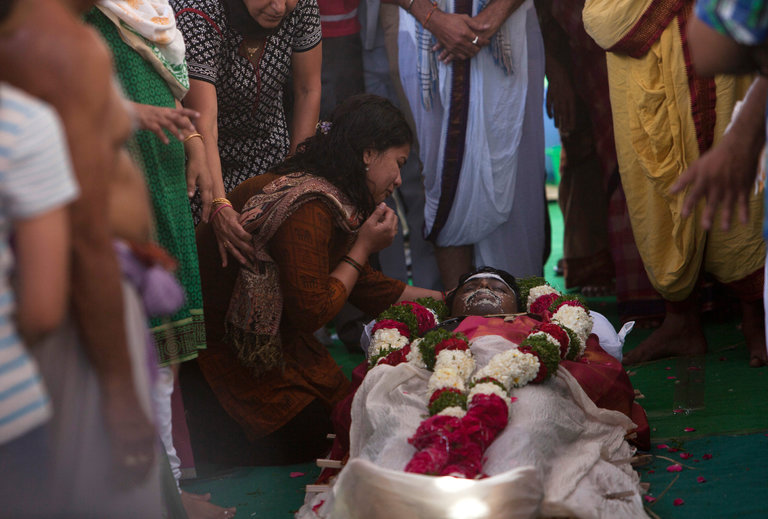 As family and friends said goodbye to Srinivas Kuchibhotla, they and other Indians denounced President Trump for failing to condemn his vicious and unprovoked killing as a hate crime. Here, his wife, Sunayana Dumala, mourned Tuesday in Hyderabad, India, near the body of her husband, shot last week in a Kansas bar. Will Trump and the FBI insure justice is done ??? And what will be the impact on Indian immigration to the US ???

“HYDERABAD, India — Just after 2 p.m. Indian Standard Time on Tuesday, the body of Srinivas Kuchibhotla, an Indian immigrant fatally shot in a bar outside Kansas City, Kan., was placed on a pyre made of logs.

Grains of rice were placed around his mouth, as per Hindu tradition, to signify his last earthly meal, and his forehead was smeared with sandalwood paste.

His father poured clarified butter on his head, as a sign of purification, and used a burning stick to light the fire.

But before the ancient rituals could be completed, a cluster of young mourners —

mostly information technology professionals or engineers, like the dead man —

began shouting. “Trump, down, down!” they said. “Down with racism! Down with hatred!”

Kuchibhotla’s violent death is seen by many as a harbinger of rising anti-immigrant sentiment in the United States.

Last Wednesday, a 51-year-old white Navy veteran confronted Kuchibhotla, 32, and another Indian patron at a bar in Olathe, Kan.,

questioned them belligerently about their visa status and, after being asked to leave, returned with a gun and shot them.

“Hate has a way of growing, and becoming a trend,” said Kiran Kumar, a software engineer who attended the funeral, holding a handmade sign condemning hate crimes.

In the days since Kuchibhotla’s death, most of India’s major daily newspapers had published angry editorials over what they saw as the Trump administration’s silence on the killing.

On Tuesday, as Kuchibhotla’s body was carried to the cremation ground,

India’s minister of labor, Bandaru Dattatreya, attended, as did a major movie star in the Telugu language,

and Chukka Ramaiah, a 91-year-old mathematics teacher who is celebrated for sending students to top-ranked Indian institutions and onward to the US.

“It is heartbreaking for any teacher to see a student die, at such an age, before having lived his fullest life,” Ramaiah said.

“How much has America lost, too, for this single act of hatred?”

After the ceremony, Dattatreya publicly recommended Indian students speak only in English for the duration of their time in the US, as a safety measure.

The last rites on Tuesday coincided with the arrival of India’s foreign secretary, Subrahmanyam Jaishankar, in Washington.

and to preserve the annual distribution of 65,000 temporary skilled worker visas, known as H-1B visas,

which are overwhelmingly used by Indians.

The immigration story for Kuchibhotla’s family seemed to be ending.

His mother, Parvatha Vardhini, said she had once been “happy that one of the Kuchibhotla family went to the U.S. for a better future.”

But this week, after her older son’s death, she demanded that her younger son, who is also employed in the United States, give up his job and stay in India.

“I will not allow my younger son to return to the U.S. again,” she told The Hindustan Times.

“I want him and his family to return to Hyderabad for good.”

As the rites reached their conclusion, a cousin, Venu Madhav, described Kuchibhotla as “a typical immigrant American success story,”

and said he and his wife had recently bought their first home.

“He considered Kansas home,” he said. “He had American friends, was part of that society.”

Madhav had already turned from the pyre, which had burst into crackling, five-foot flames.

According to tradition, mourners are expected to turn their backs from the body when it begins to burn.

They should be gone before they can hear the sound of the skull cracking, which is believed to signify the soul breaking free.”

Source: At a Funeral Pyre in India, Anger Over a Shooting in Kansas – The New York Times