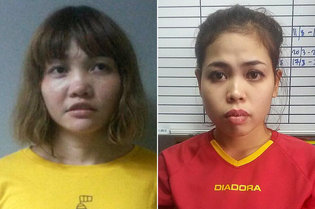 North Korea sent diplomatic delegations to Beijing and Kuala Lumpur, a rare effort at outreach to repair major damage done by recent Pyongyang actions, including the killing of Kim Jong-nam, and launching of a ballistic missile towards Japan. Above, former deputy UN ambassador Ri-Dong-il arrives in Malaysia. Below, Doan Thi Huong, 28, of Vietnam, left, and Siti Aisyah, 25, of Indonesia, were charged in Kim’s murder, and could receive the death penalty.

“In a rare bit of outreach to undo damage caused by its recent actions,

beginning an unusual diplomatic effort by the reclusive and isolated nation.

Not only does it face accusations it carried out the brazen assassination of Kim Jong-nam, estranged half brother of its leader, Kim Jong-un,

while that country’s Prime Minister, Shinzo Abe, was meeting with President Donald Trump.

The delegation to Beijing was led by Vice Foreign Minister Ri Gil-song,

and would meet with China’s foreign minister, Wang Yi.

Ri is the most senior North Korean official to visit Beijing since a delegation met with President Xi Jinping of China in May.

for tightening sanctions by suspending all coal imports from North Korea for the rest of the year,

depriving North Korea of one of its most important sources of hard currency.

Siti Aisyah, 25, of Indonesia, and Doan Thi Huong, 28, of Vietnam, were charged with the murder in a Kuala Lumpur court on Wednesday.

as he prepared to check in for a flight at Kuala Lumpur International Airport on the morning of Feb. 13.

The two women could receive the death penalty.

They were arrested soon after the Feb. 13 attack and have said they thought they were participating in a prank.

The police have also arrested a North Korean man, Ri Jong-chol, and are seeking seven others.

South Korean officials have accused the North Korean government of ordering the assassination.

There was no word yet on whether Malaysian officials would charge Ri Jong-chol in the attack.

With relations between Malaysia and North Korea fraying over the killing,

a high-level North Korean delegation, including the former deputy ambassador to the United Nations, Ri Dong-il,

arrived in the Malaysian capital to discuss taking Kim’s body to North Korea,

Ri Dong-il, the envoy, said he also would demand the release of Ri Jong-chol, Yonhap reported.

“We are here to discuss human rights issues and find an agreement,” Ri told reporters outside the North Korean Embassy …

Whether Malaysia is prepared to discuss friendly relations remains to be seen.

Officials at the Malaysian Foreign Ministry declined to comment

on the standoff over the release of the body and the detention of the North Korean suspect.”