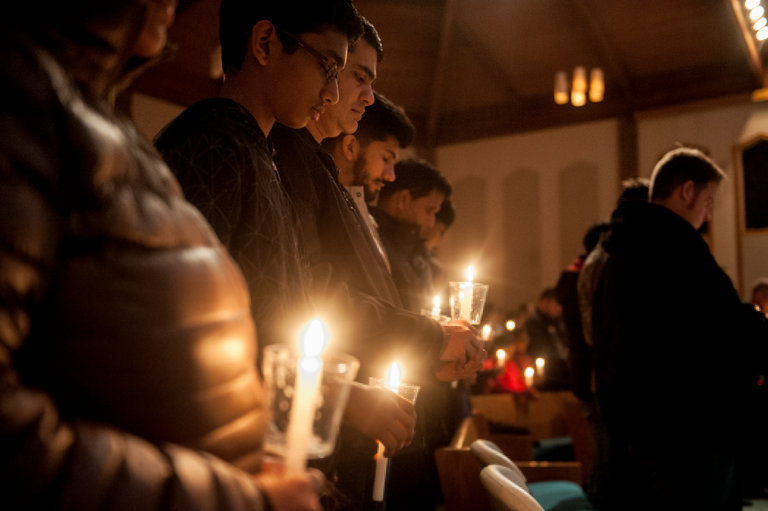 Ill treatment of Indian immigrants has caused serious damage to bilateral relationships before. In 2009 and 2010, racially motivated crimes against Indian students in Australia set off massive demonstrations. The number of Indians applying for student visas plunged by nearly half, with severe costs to Australian educational institutions. Indians generally welcomed Trump’s victory, but the shooting of two unarmed Indians in a Kansas bar, and worries about an immigration crackdown, remind them of Australia. Both software and higher education sectors would be crippled if large numbers of Indians decide NOT to come to the US. Here, a church service in Olathe, Kan., honoring the two immigrants who were shot by an obvious racist.

“NEW DELHI – Jeena Sharma, 25, was applying for a work visa to the United States when news came that

two Indian engineers had been shot in a Kansas bar by a man who drunkenly questioned their immigration status.

News of the shootings, which took place last Wednesday, was quickly eclipsed by other developments in Washington, and even in Kansas,

but the same cannot be said of the Sharma household of Mumbai,

where Ms. Sharma has received emphatic maternal lectures about her plans to move, starting first thing in the morning.

“She asked me: ‘Why do you even need to go to the States? Why do you need to go to a country that doesn’t want you? I’m going to be scared for your life every day,’” Ms. Sharma said.

Even as she endeavored, patiently, to convey to her mother the difference between Kansas and New York City, where she hopes to move,

Ms. Sharma felt her own apprehensions growing, as the days passed and President Trump made no statement on the crime.

“It’s definitely very scary for me at the moment,” she said.

“It’s almost as if a brown person is dead, like it doesn’t matter.”

The body of Srinivas Kuchibhotla, the 32-year-old software engineer fatally shot in the Olathe, Kan., bar, was expected to arrive by Monday in Hyderabad,

a technology hub where immigration to the United States has long been viewed as the surest path to success.

and many here express admiration for his business empire and promised crackdown on terrorism.

But even before Wednesday’s shootings, that optimism had been diluted by fears that America might no longer welcome immigrants.

India is second only to China as a feeder to American colleges,

with around 165,000 students enrolled in the 2015-16 school year, according to the Institute of International Education.

Indians are the largest recipients of temporary skilled worker visas, known as H-1B visas, which the Trump administration intends to cut back.

And close to half a million Indians, who mostly went to the US legally as students or tourists or on work visas, have stayed on after their visas expired, the Pew Research Center estimates.

Reports of rising American hostility toward immigrants have stunned many Indians,

said Alyssa Ayres, a senior fellow at the Council on Foreign Relations, who visited Hyderabad recently.

“I had a guy on a plane sitting next to me, who turned to me and said, ‘Is it true, what they say about America under Trump?’” she said.

“There is a kind of confusion: What is happening to the United States? People can’t believe what they’re reading.”

Ill treatment of Indian immigrants has, in the past, caused serious damage to bilateral relationships.

In 2009 and 2010, reports of racially motivated crimes against Indian students in Australia

set off demonstrations outside the Australian Embassy in New Delhi,

where Australia’s then-prime minister was burned in effigy.

After that, the number of Indians applying for student visas plunged by nearly half,

The diplomatic effect of the shootings in Kansas has been muted so far.

Prime Minister Narendra Modi has not commented on them, though the subject will certainly be raised this week, along with the thorny issue of curtailing H-1B visas,

Some Indians who had planned to go to the United States said they were hesitating.

Manavi Das, who is considering several universities, said she was “constantly looking to see if the school is in a red state, or has witnessed a shooting in recent times.

“After a certain event in November,” she said, “I have found my apprehensions turned up a notch.”

Sunny Choudhary, 23, said he had decided not to apply to graduate engineering programs in the United States,

because “recent conditions, they are turning into, I think, hostile conditions.”

After Trump was elected, he added, “my parents said: ‘No, you should not go there. Now, they say, we won’t let you go there.’ ”

He said that, like many of his friends, he had narrowed his search to Europe.

And some Indian parents could use their persuasive talents to encourage their children to return home.

“For this four-year period, after the transfer of regimes, I think Indians can come back and serve their country,”

said Suguna Kadiyala, 73, whose daughter has been in the United States for 20 years.

Nageswara Rao, 71, whose son and daughter work in the software sector in the United States, said he was “not much worried,” though he does dispense regular advice on safety measures.

“It is always better to keep away from bars,” he said. His children are safe, he added, “because they don’t go to these bars where white people are more.”

He continued, “I give them advice to be a little bit careful and don’t get into a wrangle with anybody. Just have your own peaceful life.”

Source: After Kansas Shootings, Indians Are Wary of Coming to U.S. – The New York Times