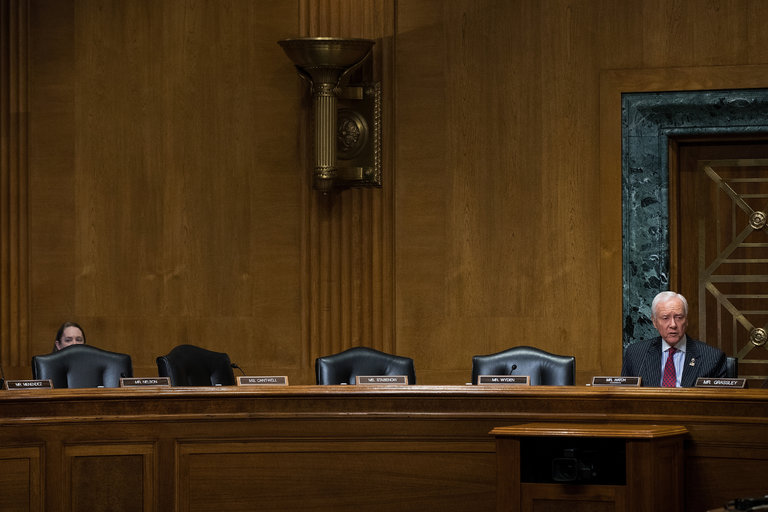 Empty seats of Dems on Senate Finance Committee didn’t stop RPBs from breaking a long-standing practice — taking a vote ONLY if at least one minority member was present. Stunning move makes clear they will use their razor-thin majority to muscle through the Trump / mainstream RPB agenda, regardless of Dem objections

“Senate Republicans used the muscle of their majority on Wednesday

to push forward some of President Trump’s most controversial cabinet nominees,

using arcane procedural maneuvers and party-line votes to overcome what they called stall tactics by Democrats.

but also the difficulty they will face going forward in trying to slow the Republican legislative agenda.

For the second time this week, Democrats on the Senate Finance Committee boycotted a hearing

on the nominations of Representative Tom Price and Steven T. Mnuchin,

Trump’s picks to lead Department of Health and Human Services and the Treasury.

a member of the minority party be present for any formal committee action,

and held a vote Wednesday WITHOUT their Democratic colleagues.

They voted unanimously to move the nominations forward …

Price and Mnuchin may not have been truthful in their confirmation hearing testimony,

Now that the Republicans have voted without them, they are left with few options …

A divided Senate Judiciary Committee approved his nomination on Wednesday, despite fierce pushback from Democrats

prompted by the president’s dramatic firing of the Justice Department’s acting chief in a clash over the administration’s refugee policy.

The committee approved Sessions on a straight party-line vote,

with 11 Republicans supporting their former colleague from Alabama and nine Democrats opposing him.

the acting attorney general, Sally Q. Yates, a holdover from the Obama administration,

over her refusal to defend the president’s order on refugees against legal challenges.

the White House accused her of having “betrayed” her department.

Democrats zeroed in on the Yates’ firing and said that Sessions,

an early supporter of Trump’s long-shot campaign who went on to become an influential adviser,

Despite the progress with the Sessions nomination, delays remain on other fronts.

Republicans are still grappling with Democrats over

how he would run the agency charged with protecting the nation’s air, water and health.

Senator John Barasso of Wyoming, the Republican chairman of the committee, dismissed the boycott as a stunt.

Looking at the Democrats’ empty seats, he said that it was

“a disappointing turn of events,” and that his colleagues were engaging in “political theater.”

“I hope this is not the new normal,” he said.

“We cannot afford for the E.P.A. to go without an administrator for the foreseeable future.”… “

[ And yet, Barasso and the rest of the Senate RPBs seemed to have no concern about an empty Supreme Court chair for almost a year now … ]

The White House’s Office of Management and Budget will also be without a leader for a while longer,

over a delay in receiving his F.B.I. background check.

Senator Claire McCaskill, Democrat of Missouri, said that while the full report was available on Tuesday,

she had not had an opportunity to read it before the Wednesday hearing.

She insisted that the committee convene again for a vote.

While Republicans have used similar delay tactics when they were not in power,

many are arguing that Democrats should move on and let Trump assemble his government.

“To do some of this sort of childish stuff is going to make their comeback harder.

If they can have a comeback.””

[ And this highlights the dilemma for Dems and other liberals who are looking for signs of “moderation” from mainstream RPBs.

who have made clear their opposition to much of what Trump is doing,

albeit almost exclusively in the area of foreign policy.

Yet when it comes to ratifying his viciously right-wing nominees for Cabinet positions,

neither Graham nor McCain, nor “profile in courage” Marco Rubio,

have done ANYTHING to stop Trump from getting whom he wants.

Given the essential collaboration of “moderate” RPBs with Trump on personnel,

it’s self-delusion for Democrats and others to think