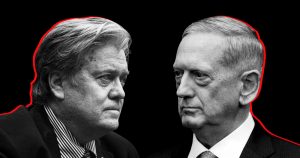 Bannon remarks to German Ambassador recall infamous 2014 Vatican speech endorsing “strong nationalist movements”, in preference to EU. German & other diplomats alarmed at lack of appreciation for EU’s role insuring peace and prosperity in post-war Europe. “There appears to be no understanding in the White House that an unravelling of the EU would have grave consequences.” US support for right-wing populists in upcoming European elections would trigger “a major trans-Atlantic crisis.”

pledged US “steadfast and enduring” commitment to the European Union,

and delivered a  very different message, according to people familiar with the talks.

Bannon, these people said, signalled to Germany’s ambassador to Washington that

he viewed the EU as a flawed construct

and favoured conducting relations with Europe on a bilateral basis.

THREE people briefed on the meeting spoke to Reuters on condition of anonymity due to the sensitivity of the matter.

The German government and the ambassador, Peter Wittig,

declined to comment, citing the confidentiality of the talks.

The sources described a meeting in which Bannon took the time to spell out his world view.

when he was running the right-wing website Breitbart News.

In those remarks, delivered via Skype, Bannon spoke favourably about European populist movements

and described a yearning for nationalism

by people who “don’t believe in this kind of pan-European Union.”

Western Europe, he said at the time, was built on a foundation of “strong nationalist movements”,

adding: “I think it’s what can see us forward”.

The encounter unsettled people in the German government,

in part because some officials had been holding out hope that

and offer a more nuanced message on Europe in private.

Germany and its European partners must prepare for a policy of “hostility towards the EU”.

A second source expressed concern, based on his contacts with the administration, that

there was no appreciation for the EU’s role in ensuring peace and prosperity in post-war Europe.

“There appears to be no understanding in the White House that

an unravelling of the EU would have grave consequences,” the source said.

The White House said there was no transcript of the conversation.

he has repeatedly praised Britain’s decision to leave –

and take concrete steps to destabilise the bloc.

and Wolfgang Ischinger, chairman of the Munich Security Conference,

to issue unusual calls last week for Pence to affirm during his visit to Europe that the U.S. was not aiming to break up the EU.

Pence obliged on Monday in Brussels, pledging strong ties between the United States and the EU,

and claiming his message was shared by the president.

But the statements did not end the concerns in European capitals.

“We are worried and we should be worried,”

a former German ambassador to the Britain and the United Nations, told Reuters.

“No one knows anything at the moment about what sort of decisions will be coming out of Washington.

and not what they see as an amorphous group of countries like the EU.”

With elections looming in the Netherlands, France and Germany this year,

could convince Trump to work constructively with the EU.

in an article published last week, entitled “How Europe should deal with Trump”.

He said that if the U.S. administration actively supported right-wing populists in the looming election campaigns,

it would trigger a “major transatlantic crisis”.”