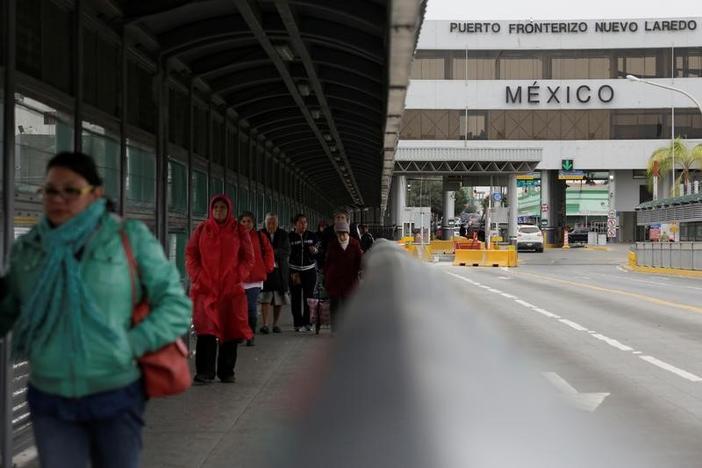 Trump orders US government economists to change the way they calculate trade deficits to make them seem larger than they are. Trade Representative officials comply — but also complain. Here, the border crossing at Nuevo Laredo across the Rio Grande from Texas in January.

in a way that would likely help bolster political arguments to renegotiate key trade deals,

the Wall Street Journal reported on Sunday, citing people involved in the discussions.

The main idea being discussed is whether to exclude “re-exports” from the calculation of U.S. exports, sources told the newspaper.

Re-exports refer to goods that are imported into the United States, then transferred to another country.

Trump has been highly critical of trade deals including the North American Free Trade Agreement (NAFTA) with Mexico and Canada.

By using a metric that widens the trade deficit, it could give him political leverage to make sweeping changes, the paper reported.

If the government adopted the new method, the deficit with Mexico would be nearly twice as high.

objected to a request to prepare data using the new methodology.

Although they complied with the request, the newspaper reported, the staffers explained why they disagreed with the approach.

In a statement to the newspaper, the office of the U.S. Trade Representative’s deputy chief of staff, Payne Griffin, said

officials there are not close to a decision yet on whether to adopt a new approach.

“We had a meeting with the Commerce Department, and we said,

‘Would it be possible to collect those other statistics?'” he was quoted as saying.”