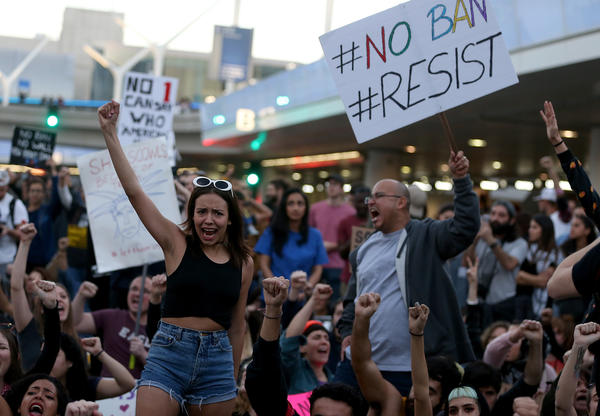 Spirited and well-attended airport demonstrations all over the state this weekend make clear California is not “Trump country”. There are now several scenarios under which it might exit the US. While appealing to many residents, major practical issues would need to be resolved – including whether to join with fellow West Coast “dissidents” Oregon and Washington, whose citizens are not always enamored of the Golden State.

the hundreds of thousands of signatures they need to get a proposed “Calexit” initiative on the state ballot.

If the measure gets on the ballot and gains approval by a majority of voters,

it would repeal clauses in the California Constitution stating that

the U.S. Constitution is the “supreme law of the land,”

according to the title and summary prepared by the state attorney general’s office.

The measure would place another question on the ballot in 2019,

asking whether California should become a separate country.

If at least half of registered voters participate in that vote, with at least 55% of those voting to approve,

the results would be treated as California’s declaration of independence.

and if it succeeds would result in “major, but unknown budgetary impacts.”

The proposal’s backers, known as Yes California, have argued that

the state is culturally out of step with the rest of the U.S. and that

California pays more money to the federal government than it receives in spending.

The election of President Trump has only strengthened their argument, they say .

“California loses [by] being a part of America culturally and financially,”

said Marcus Ruiz Evans, one of the group’s founders.

“It could be a nation all its own, everybody knows that.

The only question is if they want to break off.”

It’s unclear how the group will collect the required 585,407 valid signatures from registered voters over the next 180 days to qualify for the ballot.

A campaign committee, Yes California Independence Committee, has raised no funds so far,

according to records from the secretary of state.

But Evans says that his group has more than 7,000 volunteers —

significantly down from a 13,000 estimate in December — ready to gather signatures

and that voters can expect to see signature gatherers on the streets in the next couple of days.

Yes California says that even if the proposed initiative does land on the ballot and voters approve it,

such an unprecedented move to secede would still need to receive approval of at least a majority of the states in the union, among other legal hurdles .

“I think we’d have the votes today if we held it.””