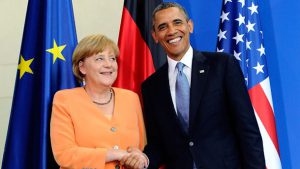 This guy — Mark Agent — gets credit for articulating it on January 21, the day after Trump’s sparsely attended Inauguration. Good for him. It’s become absolutely clear now that this is the case, after Trump’s weekend travel fiasco. His arguments aren’t perfect, and some already seem dated, less than 10 days after publishing them. But the point is correct and I like using the “Press This” app for formatting, so I’m using it to make my point — Merkel is by far the best hope for any positive forces in the West coalescing together. Let’s hope her “formation” in the ex-DDR will give her the substance to calmly say “Nein” to Trump … even then … it’s hard to see how it doesn’t all blow up … 🙂 …

“When Trump was elected, the world’s leaders sought to make contact …

Among those voices, Angela Merkel’s welcome was appropriately guarded:

“Germany and America are bound by common values — democracy, freedom, as well as respect for the rule of law and the dignity of each and every person, regardless of their origin, skin color, creed, gender, sexual orientation, or political views. It is based on these values that I wish to offer close cooperation, both with me personally and between our countries’ governments.”

She had the wisdom to welcome him, but qualify that by insisting on the sort of civilised western democratic values that he has been flouting.

She speaks wisdom to power.

In the absence of wisdom in the White House, her wisdom shines …

In the UK, people with short memories, shaped by war movies, equate Germany and Hitler.

That’s unfair, and underestimates how easily the English could have headed down that path —

the outpouring of xenophobia and migrant-hating following the EU referendum is a stark reminder of that.

People with longer understanding will know that the German-speaking world was, for centuries, a complex web of states.

For most of the eighteenth century, the King of England was one of the electors in that Holy Roman Empire –

neither holy, Roman, nor an empire, but a precursor of the EU.

Power was wielded by consensus and collaboration.

Growing up in East Germany, Merkel could be forgiven for having been over-influenced by that repressive regime.

Instead, she shows how deeply the consensual model is rooted in the German psyche.

She’s reverted to type in an impressive way, with the wisdom to compromise and seek the common good.

Of all the nations of Europe, Germany has suffered most

from having been infected with the madness of facism and

has the deepest reasons to say “Never again”…

It is Angela Merkel, who now stands tall in the face of an unsavoury US President, signalling that there is another way …

Merkel isn’t going to stand up and say “I am in charge”.

Unlike Theresa May, she is not going to end up in court,

trying to defend the side-lining of Parliament, or flagrantly ignoring well-informed advice.

The centre of gravity has shifted already.

And if the US becomes more isolationist and inward-looking, as Trump has suggested, then it is actively vacating any claim at world leadership …

And for the much-smaller nations of Europe?

On our own we are small-fry, perfectly able to enter trade deals, but only of the sort where China drafts and we sign.

Together Europe is stronger.

We have deeply-shared values and histories.

The centres of gravity in Europe cluster around Angela Merkel,

who in her turn shows the sort of pragmatic wisdom that delivers stability with diversity,

enabling power to be devolved away from the centre.

This is a less-aggressive model, which can cope with not being the world’s dominant power:

It can cope with national leaders being one-among-many in the EU,

and with the EU being among the world’s centres of power.

In Germany, Angela Merkel is a wise and respected Chancellor,

who happens to be a woman, which seems to be no big deal.

As well as standing up for western values of Liberty, democracy and fairness,

the Germans are showing us something about gender relations —

about being comfortable in one’s own skin, and therefore able to relate to others without needing to dominate.

Time to welcome Angela Merkel to her new role –”

the only visible leader who truly embodies the values of the Western world,

those that Trump and his crony pals should be defending,