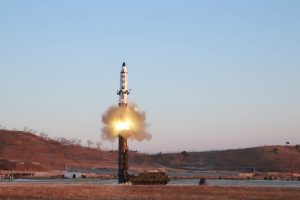 aimed at stopping the country’s nuclear weapons and ballistic-missile program.

The ban took effect on Sunday and will last until the end of the year,

the Chinese Commerce Ministry said in a brief statement posted on its website.

Chinese trade and aid have long been a vital economic crutch for North Korea,

and the decision strips North Korea of one of its most important sources of foreign currency.

Coal has accounted for 34 to 40% of North Korean exports in the past several years, and almost all of it was shipped to China,

according to South Korean government estimates.

[ Consequently, this is a major economic blow to the Pyongyang regime. ]

that the Security Council condemned as a violation of its resolutions

that prohibited the country from developing and testing ballistic missile technology.

In the test, North Korea claimed that it had successfully launched a new type of nuclear-capable missile.

It said its intermediate-range Pukguksong-2 missile used a solid-fuel technology,

which US experts say will make it harder to detect missile attacks from the North.

In the resolution it adopted in November in response to the North’s fifth and most powerful nuclear test,

the Security Council said that North Korea should not be allowed to export more than 7.5 million metric tons of coal a year

or bring in more than $400 million in coal sales, whichever limit is met first.

It was unclear whether that cap has already been reached for this year.

Officials of the United States and its allies, including President Trump, have suggested that

But while it does not approve of the North’s weapons program,

China has also been seen as reluctant to inflict crippling pain on North Korea,

for fear that it might destabilize its Communist neighbor.

In April, China announced that it would ban coal imports from North Korea as part of the UN efforts

to squeeze the country’s ability to raise funds for its nuclear and missile programs.

But it allowed exemptions for coal imports for “livelihood” reasons, and deliveries continued.

The Chinese Ministry of Foreign Affairs did not comment on the suspension after it was announced on Saturday.

Calls to the ministry’s press officer were not answered.

On Friday, the Chinese minister of foreign affairs, Wang Yi, said at a conference in Munich that

the United Nations sanctions of North Korea “must continue to be strictly implemented.”

But Wang also argued that only renewed negotiations would offer any hope of curtailing North Korea’s nuclear weapons development.

aimed at a negotiated settlement of the North Korean nuclear standoff.

But those talks have stopped since 2009, and there seems little hope of them restarting anytime soon.

“This situation cannot continue,” Wang said, “because the ultimate outcome may be intolerable to all sides.”

an increase of 14.5% on the amount in 2015, according to Chinese customs statistics.

under the limits imposed by the sanctions, the coal quota would be used up by April or May.

The coal suspension also followed the assassination of Kim Jong-nam,

the estranged half brother of the North Korean leader Kim Jong-un, last Monday at an airport in Malaysia.

The Malaysian authorities are continuing to investigate the case.

Calling it an act of “terrorism,” South Korean officials have said North Korea was behind the killing of Kim,

who had been living in Macau, the Chinese gambling enclave.

Some analysts have speculated that the killing may have infuriated Beijing because Kim was considered a pro-Chinese candidate to replace Kim Jong-un,

the North Korean leader, should the current government in North Korea fall.”