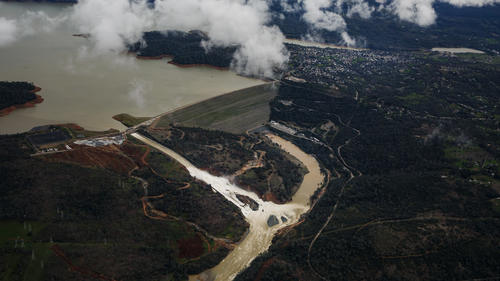 More than a decade ago, several ENVIRONMENTAL GROUPS asked FEDERAL regulators to armor the hillside that forms the emergency spillway. The 2005 filing by Friends of the River, Sierra Club and South Yuba River Citizens League warned of “a loss of crest control” — which would have happened if the top of the spillway had collapsed — as it almost did February 12. A crumbling weir would have taken a dangerous bite out of the side of the reservoir, unleashing catastrophic torrents that could have rushed more than 100 miles down the Feather and Sacramento rivers, breaching levees all the way to the Sacramento-San Joaquin River Delta. Top: Emergency repair work during lull in rainstorms. Bottom: Water released going down hillside, not spillway.

fundamental problems with the original design of the emergency spillway

that were never corrected despite repeated questions about its adequacy.

The key reservoir in the State Water Project

that typically provides Southern California with roughly a third of its supplies,

Routine water releases are made through the powerhouse at the base of the dam, which is the nation’s tallest.

Higher releases go down the main spillway, a long, gated concrete chute off to the side of the dam.

The emergency spillway — which until February 11 had never been used — is to the side of the main spillway.

The “solid” bedrock that designers and officials thought would stand up to the force of the spill was soft and easily eroded.

The long concrete lip of the spillway was not anchored into the rock.

Critical power lines were strung across the spillway, which consists of nothing more than an earthen hillside covered with trees and brush.

“There is no way to rationalize running water down a hillslope with deep soils and a forest on it and weak bedrock,”

After a hole big enough to swallow a small house appeared in the main spillway,

chunks of concrete and dirt tumbled into the channel at the base of the dam,

leaving them with limited discharge abilities just as storm runoff was pouring into the lake.

Oroville — which at the same date a few years ago was less than 40% full — was suddenly full to the brim.

The morning of February 11, what Bill Croyle, acting director of the Department of Water Resources, called “a little water”

started spilling over the concrete lip like an overflowing bathtub.

At the peak of the spill, roughly 1 ½ feet of water was sheeting out of the reservoir,

spreading over the top of the hill and forming a stream as it followed a ravine down to the Feather River.

Beneath it was mostly schist, metamorphic rock that Mount described as weathered and fractured.

It started to erode under the force of the spill.

“There are unlined spillways elsewhere that perform well,” Mount said.

“But they tend to be in resistant rock, and this rock is not very resistant.

That is one of the design errors, not fully considering how soft and erodible that bedrock is.

This stuff is all busted.”

to require the state to armor the hillside that forms the emergency spillway.

The dam’s operating rules called for use of the spillway as part of flood-control operations, they argued,

so the slope needed to be armored to prevent damaging — and potentially dangerous — erosion.

emergency spills would cause extensive erosion on the hillside,

Soil, rocks and debris would clog the Feather River.

“We had real concerns that even if the spillway itself didn’t fail,

moving all that erosion of topsoil down the river would cause major damage to a very important fishery,”

The 2005 filing by Friends of the River, the Sierra Club and the South Yuba River Citizens League also warned of “a loss of crest control” —

which would have happened if the top of the spillway had collapsed — as it almost did February 12.

A crumbling weir would have taken a dangerous bite out of the side of the reservoir,

could have rushed more than 100 miles down the Feather and Sacramento rivers,

breaching levees all the way to the Sacramento-San Joaquin River Delta.

In a May 2006 filing with FERC, the Department of Water Resources insisted that the emergency spillway was sound.

“DWR recently reviewed the geologic conditions at the emergency spillway and

concluded that the spillway is a safe and stable structure founded on solid bedrock that will not erode,” the department stated.

and that erosion would not compromise the stability of the emergency spillway.”

saying the spillway had been reviewed as part of a 2004 safety analysis:

“It is important to emphasize that during a rare event with the emergency spillway flowing at its design capacity,

spillway operations would not affect reservoir control or endanger the dam,”

states the memo by a FERC senior civil engineer.

“FERC patted us on the head and said it’s all good, don’t worry about it,”

said Ron Stork, a senior staffer at Friends of the River.

Stork is not an engineer, but his decades of river work have made him a dam geek.

“I tried and failed” to get the state to upgrade the spillway, he said.

“Maybe nature gave us a wake-up call that what I suggested is needed.”

FERC spokeswoman Celeste Miller said the agency could not comment on the 2006 memo or the basis of it because the Oroville events were under review.

The memo was written during a periodic review of the dam’s operating license.

DWR spokeswoman Nancy Vogel said, “We don’t know the cause of the spillway erosion

and we won’t know the cause until we get experts in there to do a full investigation and analysis.”

“In 1968, quite frankly, there weren’t probably a lot of methodologies available to evaluate how rock erodes if you had flowing water on it.”

“Certainly we have to acknowledge that the performance we saw on that spillway was not consistent with [the DWR] conclusion,” he added.

“We saw a significant erosion occur in that formation with far less than the design amount of water that would go over that structure.”

When the spillway issue came up during relicensing, Mount said,

to determine if the bedrock was as strong as they thought it was.

“They operated with an assumption that turned out to be incorrect,” he said.

Soft bedrock is not the only problem, he added.

The concrete weir at the top of the emergency spillway was “just plopped on top of that ridge.

and had to be a major concern as [the spillway] was eroding up the hill.”

Vogel confirmed that the weir, which she said ranges in height from 25 feet to 45 feet, was not anchored.

As to why the state never moved transmission lines that cross both spillways and connect the dam powerhouse to the electrical grid,

Vogel said, “The main spillway performed well for the past 50 years, so there was no perceived need to relocate.”

as dam operators shoved as much water down the broken main spillway as they safely could.

By late last Friday afternoon, reservoir levels had fallen more than 40 feet below the trigger point for emergency spills.”