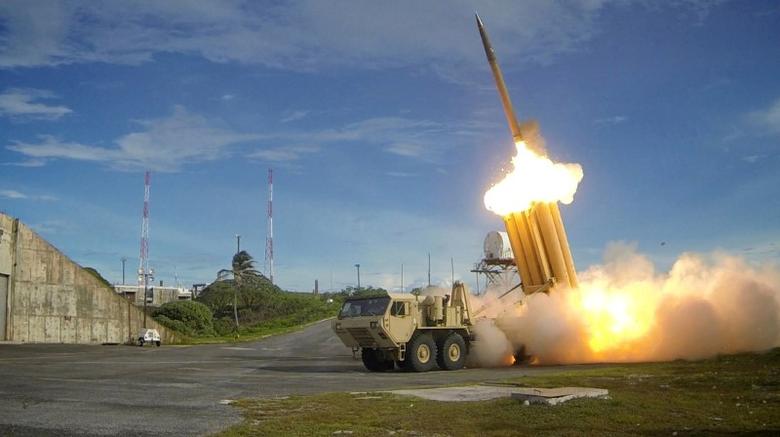 China has repeatedly expressed opposition to South Korea’s planned deployment of the US “Terminal High Altitude Area Defense” (THAAD) system. Authorities in northeast China city of Shenyang halted work at a multi-billion-dollar Lotte real estate project, leading to South Korean worries China is retaliating for plans to host the system. In an undated photo, a THAAD interceptor is launched during an intercept test.

if it allows the Seoul government to deploy a U.S. anti-missile system

on land that now forms part of a golf course the conglomerate owns.

The comments come soon after Lotte said this month that

at a multi-billion-dollar Lotte real estate project in the northeast city of Shenyang.

Amid South Korean worries Beijing is retaliating for its plans to host the system,

which Seoul and Washington say is needed to defend against North Korea.

China worries the system’s powerful radar can penetrate its territory.

THAAD is a threat to regional security and stability,

Xinhua said in an English-language commentary, adding that

Lotte was “one decision away from becoming an accessory to the act”.

If Lotte, South Korea’s fifth-largest conglomerate, agrees to the deal,

“By association, Lotte will hurt the Chinese people and the consequences could be severe,” it added.

“The Chinese people will not support a company complicit in damaging China’s interests.”

Such commentaries are not government statements,

but can be read as a reflection of official thinking.

Lotte should defer or reject the deal, forcing the South Korean government to review the feasibility of the deployment, Xinhua added.

“One misjudged step could have severe consequences.”

and cancelling performances by Korean artists without explanation.

but Seoul still needs to respect Beijing’s concerns about the deployment of THAAD.

North Korea’s most recent test firing of a ballistic missile on Feb. 12 drew condemnation from the US, South Korea and Japan,

which urged an “even stronger” international response to Pyongyang’s violations of U.N. resolutions.”