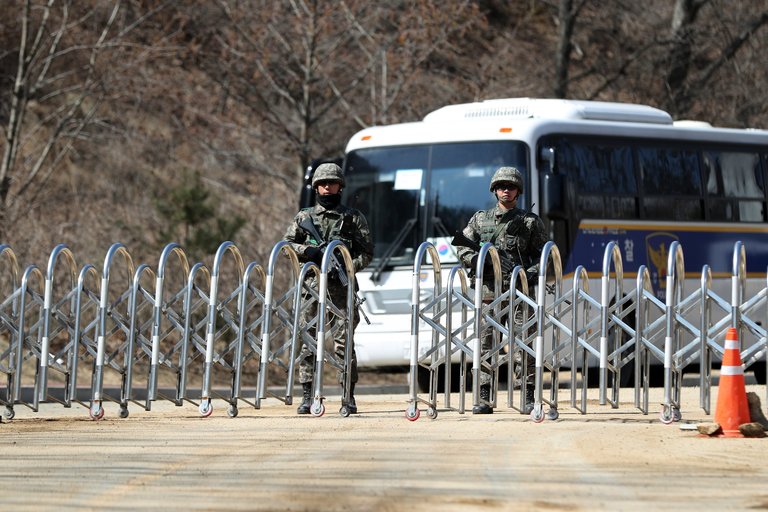 Beijing denounced the US decision to use THAAD technology and vowed to “take the necessary steps to safeguard our own security interests.” Xinhua, the official Chinese news agency, also rebuked North Korea, saying it must “face the reality that it can neither thwart Washington and Seoul nor consolidate its security in a breeze with its immature nuclear technology.” Top, Kim Jong-un, the man motivating all the nervousness. Below, South Korean soldiers guarding on Tuesday the entrance to a golf course where the Terminal High Altitude Area Defense system will be deployed in Seongju, ROK.

The United States said on Tuesday it had begun deploying an advanced and contentious missile defense system in South Korea,

prompting China to warn of a new atomic arms race in a region increasingly on edge over North Korea’s drive to build a nuclear arsenal.

The American announcement came a day after the simultaneous launch of four missiles by North Korea into waters off the Japanese coast,

which Pyongyang said was a drill for striking American bases in Japan.

The feat, footage of which was broadcast on state television, raised concern about the North’s ability to overwhelm the new defense system being deployed.

Hours later, North Korea further unnerved the region by declaring it was blocking all Malaysians from leaving its soil,

sharply escalating a dispute over last month’s assassination of Kim Jong-nam, the half brother of North Korea’s dictator, Kim Jong-un.

and its willingness to take extreme measures.

The flurry of developments heightened anxiety in Asia over signs that

and what the new Trump administration might do to prevent it.

And they came as the US and South Korea participated in large-scale military exercises that North Korea has condemned.

that would almost certainly provoke an attack on South Korea and a reintroduction of nuclear weapons to the South.

Intelligence officials say North Korea is already able to hit much of South Korea and Japan with a nuclear-tipped missile.

A spokesman for the Chinese Ministry of Foreign Affairs, Geng Shuang,

denounced the US decision to deploy the Terminal High Altitude Area Defense system, or THAAD,

and vowed that Beijing would “take the necessary steps to safeguard our own security interests.”

“The consequences will be shouldered by the United States and South Korea,” Geng added,

warning that the two countries should not “go further and further down the wrong road.”

For days, the official Chinese news media has warned that deployment of THAAD

could lead to a “de facto” break in relations with South Korea and urged consumers to boycott South Korean products.

The Chinese authorities recently forced the closing of 23 stores owned by Lotte,

a South Korean conglomerate that agreed to turn over land that it owned for use in the Thaad deployment,

and hundreds of Chinese protested at Lotte stores over the weekend, some holding banners that read, “Get out of China.”

Xinhua, the official Chinese news agency, warned that THAAD “will bring an arms race in the region,”

likening the defensive system to a shield that would prompt the development of new spears.

But in another article, the news agency rebuked North Korea,

nor consolidate its security in a breeze with its immature nuclear technology.”

and suggested that its attempts to please both countries in hopes of averting a crisis had fallen short.

“To put it bluntly using a common Chinese expression, it has wanted to have a foot in two boats,”

China was worried that the deployment of the system would open the door to a broader American network of antimissile systems in the region,

possibly in places like Japan and the Philippines, to counter China’s growing military

as much as North Korea.

The developments come as South Korea is consumed by turmoil over the impeachment of President Park Geun-hye,

whose administration agreed to the THAAD deployment.

But with the president facing possible removal from office over a corruption scandal, the fate of the system has been in doubt.

Its accelerated deployment could make it harder, if not impossible, for her successor to head off its installation.

Moon Jae-in, an opposition leader who is the front-runner in the race to replace President Park,

acknowledged that it would now be difficult to overturn South Korea’s agreement to deploy the system.

But he has insisted that the next South Korean government should have the final say on the matter,

saying that Ms. Park’s government never allowed a full debate on it.

Under its deal with Washington, South Korea is providing the land for the missile system and will build the base,

but the United States will pay for the system, to be built by Lockheed Martin, as well as its operational costs.

A C-17 cargo plane landed at the United States military’s Osan Air Base, about 40 miles south of Seoul, on Monday evening, carrying two trucks, each mounted with a THAAD launchpad.

The South Korean Defense Ministry declined to specify when the system would be operational.

But the South Korean news agency Yonhap reported that

the deployment was likely to be completed in one or two months, with the system ready for use by April.

Paul Haenle, director of the Carnegie-Tsinghua Center at Tsinghua University in Beijing, said that

on an intercontinental ballistic missile that could hit American cities.

“That’s a game-changer,” said Haenle, who was director for China on the National Security Council under Presidents George W. Bush and Barack Obama.

China has long opposed American missile defenses, in part because of fears that

Chinese strategists warn the US might consider such an attack

if it was confident a defense system could intercept Chinese weapons that escaped destruction.

China is believed to have already embarked on a program to modernize its arsenal and develop new weapons designed to avoid missile defenses,

and analysts said the deployment of THAAD could prompt it to accelerate those efforts.