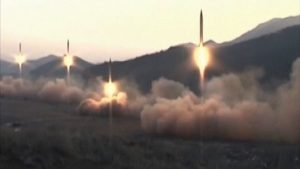 China has been incensed over the deployment of the THAAD system, seen here, which it regards as an intrusion that could compromise its military capabilities. It is a MOBILE system – as were the North Korean missiles that accelerated its deployment, bottom. Mobility makes it much harder for any adversary to track its location – one big reason for China’s intense opposition.

Alarmed over North Korea’s increasingly provocative behavior, the US said Tuesday that

it had started to deploy an antimissile system in South Korea that China has angrily opposed as a threat to its security.

apparently in response to joint naval exercises by South Korea and the United States.

Those launchings led South Korea to call for the accelerated deployment of THAAD.

A spokeswoman for US forces in South Korea said that one of five major components of the missile system had arrived on Monday.

Officials said it could take a couple of months for the system to become fully operational.

Defense Secretary Jim Mattis had urged the South Koreans to move ahead with the deployment of the system during a visit to Seoul in February.

In telephone calls on Monday to South Korean and Japanese leaders, President Trump said the US would stand with its Asian allies and take steps to defend against North Korea’s growing ballistic missile threat.

Trump emphasized the US was taking steps to “enhance our ability to deter and defend against North Korea’s ballistic missiles using the full range of US military capabilities,” the White House said in a statement.

China has been incensed over the deployment of the system,

fearing it could give the US military the ability to quickly detect and track missiles launched in China, according to analysts.

A spokesman for China’s Ministry of Foreign Affairs, Geng Shuang, said Tuesday that

China would “take the necessary steps to safeguard our own security interests,

and the consequences will be shouldered by the United States and South Korea.”

Geng warned the two countries not to “go further and further down the wrong road.”

China was worried deployment of the system would open the door to a broader American network of antimissile systems in the region,

possibly in places like Japan and the Philippines, to counter a growing Chinese military.

“China can see benefits only for a U.S. regional plan, not for South Korea’s national security interest,” he said.

The Chinese authorities recently forced the closing of 23 stores owned by Lotte,

a South Korean conglomerate that agreed to turn over land that it owned for use in the THAAD deployment.

Hundreds of Chinese protested at Lotte stores over the weekend, some holding banners that read, “Get out of China.”

Adm. Harry B. Harris Jr., the head of the US Pacific Command, announced the start of the deployment, saying that

“continued provocative actions by North Korea, to include yesterday’s launch of multiple missiles,

only confirm the prudence of our alliance decision last year to deploy THAAD to South Korea.”

The developments come as South Korea is consumed by turmoil over the impeachment of President Park Geun-hye,

whose administration agreed to the THAAD deployment.

But with the president facing possible removal from office over a corruption scandal,

the fate of the system had been in doubt.

Its accelerated deployment could make it harder, if not impossible, for her successor to head off its installation.

Moon Jae-in, an opposition leader who is the front-runner in the race to replace President Park, acknowledged that

it would now be difficult to overturn South Korea’s agreement to deploy the system.

But he has insisted that the next South Korean government should have the final say on the matter,

saying that Ms. Park’s government never allowed a full debate on it.

when it was announced that a THAAD battery would be established there.

They said they feared that the system would harm their agricultural livelihoods.

Many South Koreans also worry that any expansion of military ties with the US could worsen already festering tensions with North Korea and China.

Under its deal with Washington, South Korea is providing the land for the missile system and will build the base,

but the United States will pay for the system, to be built by Lockheed Martin, as well as its operational costs.

The US military statement said that “the first elements” of THAAD were deployed on Monday — the same day as the North’s missile launchings.

A C-17 cargo plane landed at the US military’s Osan Air Base, about 40 miles south of Seoul, on Monday evening,

carrying two trucks, each mounted with a THAAD launchpad.

“South Korea and the United States are doing their best to make the THAAD system operational as soon as possible,”

the South Korean Defense Ministry said in a statement on Tuesday, adding that

the system was necessary “to protect South Korea from the nuclear and missile threat from North Korea.”

The ministry declined to specify when the system would be operational.

But the South Korean news agency Yonhap reported that the deployment was likely to be completed in one or two months, with the system ready for use by April.

The arrival of THAAD equipment was announced after South Korea’s acting president, Hwang Kyo-ahn, talked with Trump on the phone on Tuesday morning.

and agreed to beef up the allies’ joint defense posture, strengthen sanctions and step up pressure against the North, Hwang’s office said.

On the phone with Trump, Hwang called the North’s nuclear and missile threat a “present and direct danger” to its allies, his office said.

The Japanese prime minister, Shinzo Abe, said he spoke for 25 minutes on Tuesday with Trump,

who reiterated his pledge to stand by Japan “100 percent,” according to the public broadcaster NHK.

“I appreciate that the United States is showing that all the options are on the table,” Abe said,

adding that Japan was “ready to fulfill larger roles and responsibilities” to deter North Korea.

Takashi Kawakami, a professor of international politics and security at Takushoku University in Tokyo, said

the deployment of THAAD could put the US in a stronger position to consider a pre-emptive strike on North Korea.

If the US took such action, he said,

“North Korea is going to make a counterattack on the US or Japan or another place,

so in this case they will use THAAD.”

With tensions increasing over the deployment of the system,

some in China have advocated stern measures, including severing diplomatic relations with South Korea, or more.

A retired general, Luo Yuan, even suggested that China destroy the system with a military strike.

“We could conduct a surgical hard-kill operation that would destroy the target, paralyzing it and making it unable to hit back,”