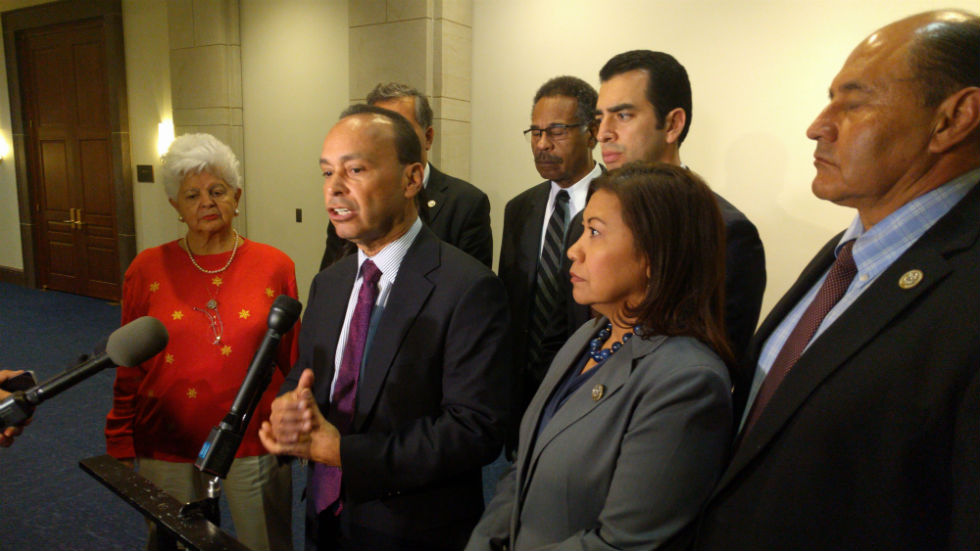 Two Congressional Hispanic Caucus members, Luis Gutiérrez (D-Ill.) and Norma Torres (D-Calif.), were asked to leave the meeting. Apparently Nancy Pelosi & the rest of the House Dem “leadership” just sat there and watched it happen. Sounds like the infamous Saddam Hussein video, or re-creations of public humiliations during the Third Reich. And the re-classification to make being undocumented itself a felony allows ICE to make a target or any and every member of the vulnerable populations.

This is shocking beyond belief …

The fact Pelosi and the others apparently failed to register much protest, while in no way surprising, is shocking …

And what about the media ???

I got a whole page of either “inside politics” or web-only sites,

until the last link, to a crappy and incomprehensible piece in the Dallas Morning News …

This is a major development.

The RPB leadership is now clearly resorting to “shock tactics”, just like Trump …

And, majoritarian House rules notwithstanding,

between lawmakers and the country’s top immigration enforcement official Thursday.

Reps. Luis Gutiérrez (D-Ill.) and Norma Torres (D-Calif.) were asked to leave the room,
while several other members of the CHC were NOT allowed into the meeting
with Immigrations and Customs Enforcement (ICE) acting Director Tom Homan.
[ Sorry about the spacing … a regrettable format glitch … 🙁 ]
The meeting was originally scheduled for Tuesday,
but ICE canceled, saying too many attendants had signed up.
ICE then coordinated with House leadership,
setting up a bipartisan meeting with a limited guest list.
Several Democrats, including House and CHC leadership, DID attend the meeting.
Gutiérrez was the first to be asked to leave.
Outside the room, he met Reps. Grace Napolitano (D-Calif.) and Juan Vargas (D-Calif.), who had not been allowed in.
“I was expecting to get let in.
We’re the ones who were asking for this meeting,
now we’ve been barred from the meeting,” said Vargas.
“I want to know what they’re doing,
and now we’ve been barred from this meeting that we called for ???”
Vargas, a former member of the Jesuit order, then led a prayer with Gutiérrez and Napolitano.
Rep. Lou Correa (D-Calif.) arrived and joined the prayer circle.
Gutiérrez said Speaker Paul Ryan‘s (R-Wis.) spokeswoman had asked him to leave the room.
Ryan was not at the meeting.
“It was the Speaker’s staff that came to me,
and I know her very, very well,
and she said she was speaking on behalf of the Speaker,
that there were a limited number of seats,” Gutiérrez said.
Rep. Bob Goodlatte (R-Va.) asked Torres to leave after Gutiérrez had been ejected.
She asked him to reconsider given the importance of immigration issues to her community, but he declined.
She left visibly upset, a Democratic aide said.
“I was asked to leave, and I was told that if we would like to have a meeting with ICE,
that we need to go with the leadership of the majority party here
and ask them to schedule a meeting and ask them to schedule a meeting for us with ICE,”
Torres told her colleagues waiting outside the room, who were also joined by Rep. Emanuel Cleaver (D-Mo.).
[ OMG, sounds like that infamous Saddam Hussein video,
where he calls people by name, and they get up and leave,
while everyone else watches … horrible … ]
Rep. Tony Cárdenas (D-Calif.) said later:
“Oh my God! That room is big enough. They have not filled it to capacity.”
Several Democrats remained in the meeting:
Republicans sent Goodlatte and Reps. Raúl Labrador (Idaho), John Carter (Texas), David Valadao (Calif.) and Michael McCaul (Texas).
Inside the meeting, Democrats complained about the closed-door policy.

“I’ve never been in a meeting where an agency can designate who can attend,” said Pelosi, according to an aide …

every one of the 11 million undocumented immigrants in the country could be removed at any time.

She characterized the comment as a “chilling” shift in the federal approach to immigration enforcement.

to include people who’ve entered the country without authorization, previously a misdemeanor offense.

“He confirmed that, given the shift, given the discretion allowed in the executive order … it could include everyone,” she said.

“They didn’t say they were going to do it.

He said they could do it — everyone’s at risk” …

RPB Labrador said Dems shouldn’t complain about being left out.

“I don’t get invited to meetings all the time, and I don’t complain about it. I’m a grownup about it,” he said after the meeting.

But CHC members left outside said the exclusion kept them from demanding information relevant to their constituents.

they are essentially stealing from my constituents the right to be represented,”

Gutiérrez said they were proud of CHC leadership representing them in the meeting.

Many Democrats had been highly critical of President Obama’s deportation approach, which they considered too strict.

in the recognition that enforcement is likely to get even tougher under the new White House.

“It was hard to not leave that meeting and believe that the Trump administration is going to target as many immigrants as possible,” Castro said.

“The only hesitation they seemed to have was whether they would go after DACA recipients.”

Deferred Action for Childhood Arrivals, or DACA, is an Obama program designed to protect certain undocumented immigrants brought to the U.S. as children from deportation.

Trump has not made clear whether he intends to do away with the policy.

“They are only constrained by the resources that they have,”

added Sánchez, former head of the CHC and current vice chairman of the Democratic Caucus.

Pelosi said the way the administration handled the meeting —

“I’ve never seen anything like it,” she said. “And hopefully never [will] again.””

Then why nothing about this from you since ???