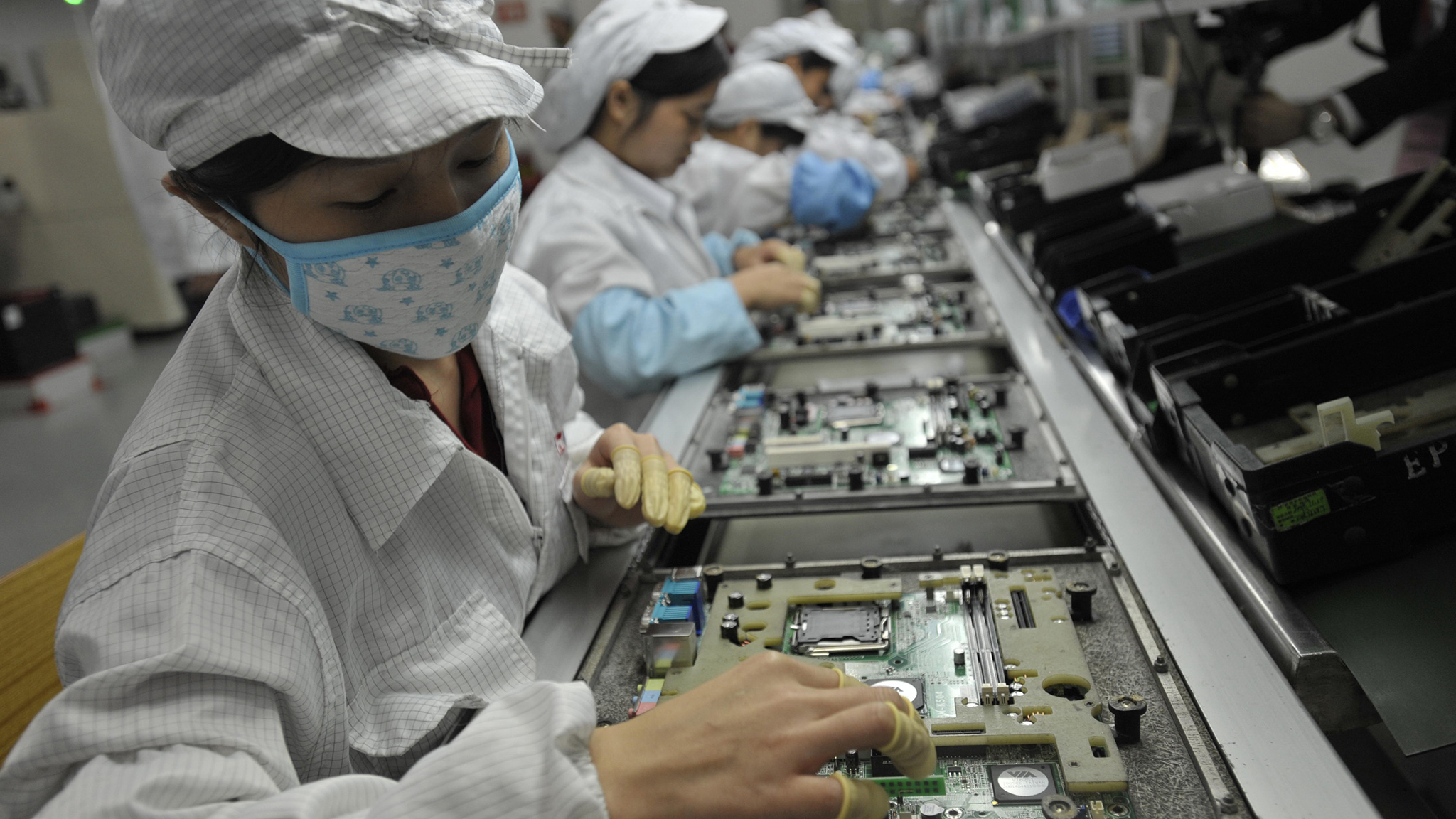 Average wages in China’s manufacturing sector have soared above those in countries such as Brazil and Mexico, and are fast catching up with Greece and Portugal, after a decade of breakneck growth that has seen Chinese pay packets treble. Here, Chinese workers on high-tech assembly line.

and are fast catching up with Greece and Portugal,

following a decade of breakneck growth that has seen Chinese pay packets treble.

Across China’s labour force as a whole, hourly incomes now exceed those in every major Latin American state bar Chile,

and are at around 70% of the level in weaker eurozone countries,

according to data from Euromonitor International, a research group.

The figures indicate the progress China has made in improving the living standards of its 1.4bn people, with some analysts arguing that

increases in productivity could push manufacturing wages even further beyond what are traditionally seen as middle-income countries.

But the fast-rising wage levels mean China could also start to lose jobs to other developing countries willing to undercut it.

where wages have stagnated and sometimes fallen in real terms,

and Greece, where average hourly wages have more than halved since 2009, according to Euromonitor.

“It’s remarkable how well China has done compared to everybody else,”

“It’s converging with the west when so many other emerging markets haven’t.”

Average hourly wages in China’s manufacturing sector trebled between 2005 and 2016 to $3.60, according to Euromonitor,

while during the same period manufacturing wages fell

as the country integrated more closely into the global economy

after its 2001 admission into the World Trade Organisation.

“We have seen pretty explosive wage growth in China since the period of joining the WTO,”

subsequently converting them to dollar terms and adjusting for inflation.

But the data do not take into account differing costs of living.

The rise in Chinese manufacturing income contrasts with the decline in other countries — such as Argentina and Brazil.

Even in India, which has seen rapid economic growth,

manufacturing wages have flatlined since 2007 at just $0.70 an hour.

Manufacturing wages in Portugal have plunged from $6.30 an hour to $4.50 last year,

bringing wage levels below those in parts of eastern Europe

and only leaving them 25% higher than in China.

Manufacturing workers in China are among the better paid in a country where wage distribution is becoming increasingly unequal.

But income levels are rising across the economy as a whole,

That level is higher than average wages for Brazil, Mexico, Colombia, Thailand and the Philippines.

Chinese workers’ productivity levels had risen even faster than their salaries.

“You have to put [the wage inflation] in context,” she said.

“Manufacturers will still benefit from being in China.”

The size of China’s domestic market is likely to aid the country’s manufacturing workers, despite rising labour costs.

“Across a range of sectors China will account for 20% of the market by 2020, similar to North America and western Europe,” said Ms Mohiuddin.

“it makes sense for [manufacturers] to be based in China”.

But Mr Robertson of Renaissance Capital noted that

the ageing of China’s population, and the expected reduction of working age people,

could lead to higher wage pressure in coming years.”