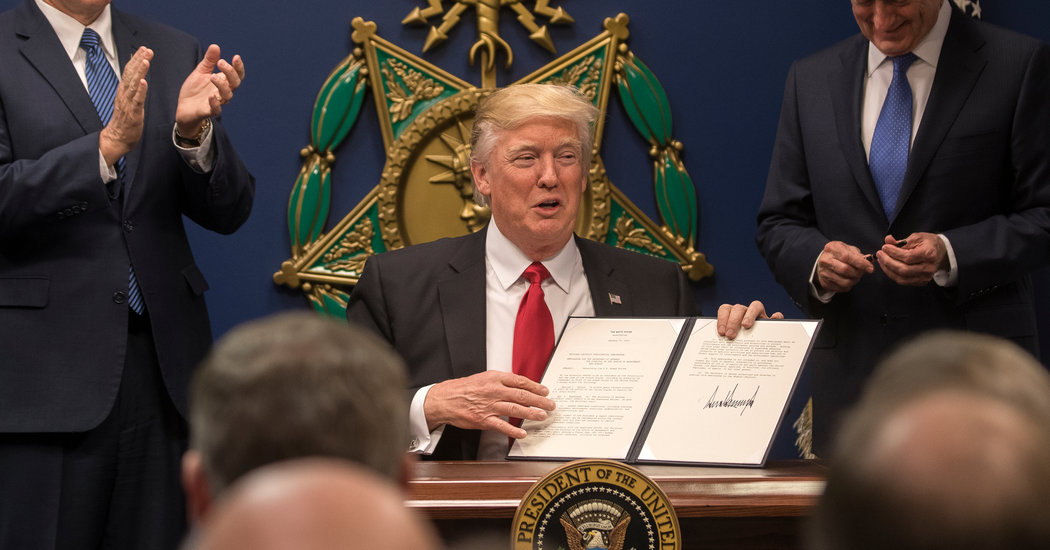 The reaction from major American companies to Trump’s order has ranged from silence to outrage.

Tech: The Voice of the Opposition

In my conversations with officials here in Washington this week, I’ve made it clear that Apple believes deeply in the importance of immigration — both to our company and to our nation’s future. Apple would not exist without immigration, let alone thrive and innovate the way we do.

A significant part of the tech community, which relies on highly skilled immigrants, went to the barricades after Trump signed the executive order.

Just about everyone in Silicon Valley, the heart of the industry, came from somewhere else or is a son or daughter of someone who did or is married to someone who did.

Among the big tech companies, Microsoft, Amazon and Expedia have been the most vocal,

declaring support for the Washington State Attorney General’s Office, which is suing in federal court to stop Trump’s order.

Airbnb, Uber, Lyft, Facebook, Google, Apple, Amazon and a host of others have said that they oppose the ban or have expressed concerns about the implications of the order.

Perhaps one of the most notable reactions came from Sergey Brin,

a Google founder who immigrated from the Soviet Union when he was 6.

For us to be successful, our men and women must reflect the diversity of the communities and cultures in which we operate. That means we must attract, retain and motivate people from many backgrounds and perspectives. Being diverse is not optional; it is what we must be.

Lloyd C. Blankfein, chief executive of Goldman Sachs, quoting what he called one of the company’s business principles.

The nation’s biggest banks – which, like the tech industry, rely on highly skilled immigrants – have taken a more “moderate” tone.

Wells Fargo said it was “reviewing” the order, and Morgan Stanley said it was “closely monitoring developments.”

Citibank, however, said that it was “concerned about the message the executive order sends, as well as the impact immigration policies could have on our ability to serve our clients and contribute to growth.”

“We, of course, all want to promote security and combat terrorism,

but we believe it needs to be done with respect for due process, individual rights and the principle of inclusion.”

The biggest exception was Blankfein of Goldman Sachs, whose opposition to the order is particularly striking because

several former executives at the bank now have top positions in the Trump administration.

The media and telecom industries has stayed mostly silent about the executive orders.

Comcast, Verizon, Time Warner and AT&T for example, said they had no public comment.

Chris Dodd, a former senator and the chairman of the Motion Picture Association of America, issued a statement on Monday:

“We firmly believe our country can both protect its national security and be a welcoming place for those who respect our values.”

Many major movie companies, including Sony, Paramount and Universal, have also been quiet on the matter,

which is more in keeping with Hollywood practice.

But 21st Century Fox issued a statement supporting its employees.

There are several reasons why a media company may not want to comment publicly on the immigration ban.

Some may fear being attacked by the president, now or in the future.

Some have major deals pending regulatory scrutiny and may want to stay under the radar.

There are other forces at work, of course.

Bob Iger, the Disney chief executive, was named to sit on Trump’s policy forum with heavyweights from other industries.

Most movie studios are owned by conglomerates that have news divisions to think about.

A few other news publishers, including Bloomberg News, The New York Times and Buzzfeed, did choose to weigh in,

but focused on supporting their employees around the world.

Consumer and Retail: Starbucks Pushes Back

I am hearing the alarm you all are sounding that the civility and human rights we have all taken for granted for so long are under attack, and want to use a faster, more immediate form of communication to engage with you on matters that concern us all as partners.

Any response from retailers and consumer brands was dwarfed by Starbucks,

which told employees on Sunday that it would hire 10,000 refugees.

But Nike also came out strongly against the policy.

In a letter to employees, it said, “This is a policy we don’t support.”

It was a thought echoed by Muhtar Kent, the chief executive of Coca-Cola:

“We do not support this travel ban or any policy that is contrary to our core values and beliefs.”

Procter and Gamble, a consumer products giant, said it was providing its employees with “full support and assistance during this period of uncertainty,” according to a spokesman, Damon Jones.

P&G has operations in some markets affected by the order, but none of its employees were stranded as a result of it, Jones said.

Walmart, in a statement to employees, said, “We are closely monitoring the situation and assessing potential impact to our business,

but especially to our associates and their families.”

Erika Winkels, a spokeswoman for Target, said the company was “focused on working directly with impacted team members” but declined to elaborate further.

Like media and telecom, the retail and consumer industry could be skittish about the potential fallout.

Executives could face anger from customers who are embracing Trump’s immigration and refugee ban.

On Monday, the hashtag #BoycottStarbucks was trending on Twitter.

“There would be no G.E. without people of all religions, nationalities, gender, sexual orientation and race.”

Energy companies have been restrained in their response.

Chevron said, “We are reviewing the executive order to understand any implications for our employees.”

Exxon Mobil, ConocoPhillips and Marathon did not respond to requests for comment.

American oil companies have little business in the seven countries listed in the new refugee policy,

but Exxon Mobil does operate in Iraq, and Chevron has operations in Iraqi Kurdistan.

For the most part, the companies are partners with national oil companies and local service companies that provide the bulk of field workers.

“We are a very global team and we will stand together as the global political situation continues to evolve. ”

Among the automakers, Ford took the most outspoken stance, coming out against the executive order.

Ford has its headquarters in Dearborn, Mich., a suburb of Detroit that has a large Muslim population.

“Respect for all people is a core value of Ford Motor Company, and we are proud of the rich diversity of our company here at home and around the world.

That is why we do not support this policy or any other that goes against our values as a company.”

General Motors said it would support its employees who might be affected.