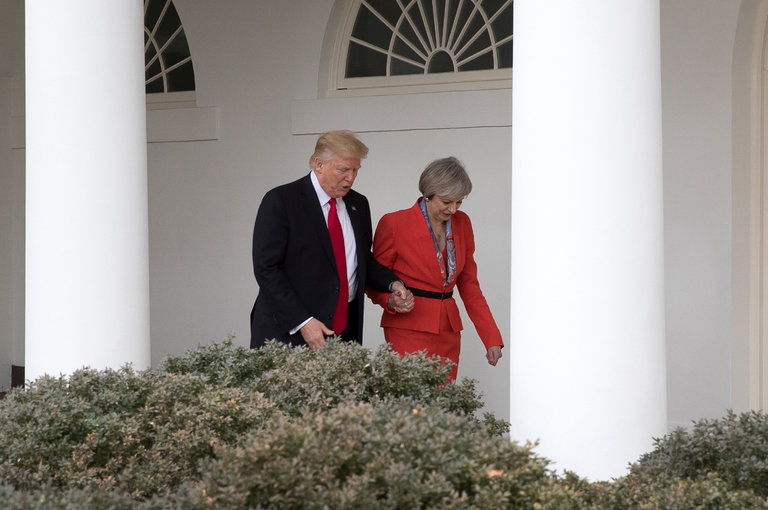 The leaders of Britain, Mexico, Japan, Canada and even Australia have been burned after what seemed like friendly interactions with Trump, causing political troubles for them at home.

A close relationship with any American president is regarded as crucial by allies and foes alike,

but especially by intimates like Britain, Canada, Japan and Mexico.

Yet like moths to the flame, the leaders of those nations are finding that they draw close to Donald Trump at their peril.

While British Prime Minister Theresa May is the latest prominent figure to suffer repercussions for her handling of Trump,

soon after what seemed to be friendly telephone calls or encounters with Trump.

They then find themselves facing a no-win situation,

either openly criticizing the leader of their superpower ally

or pulling their punches and risking severe criticism at home.

One Western leader to escape this fate so far is the German chancellor, Angela Merkel,

who has kept a cool distance from Trump.

In a telephone call on Saturday, she reminded him of

a view underlined by her official spokesman.

The danger of playing nice with Trump should come as little surprise to his country’s allies.

Besides campaigning on an “America First” platform,

he has regularly argued that allies have been taking the US for a ride, in trade, security and financial terms.

While he has been cordial in public settings with the leaders of those allied nations, Trump has turned on them soon afterward …

It had all been going so well.

for a 10-hour flight to Ankara, Turkey, for her next awkward encounter, with the increasingly autocratic Turkish president, Recep Tayyip Erdogan.

By the time she had landed in Turkey, however, Trump had signed his executive order halting entrance to the United States

of all Syrian refugees and most citizens from seven predominantly Muslim countries.

May was beginning to feel the backlash.

After she termed the executive order an American issue,

criticism erupted even among her own members of Parliament.

She was accused of appeasement by a former British diplomat.

Protesters gathered outside Downing Street on Monday night, and

more than 1.5 million signatures collected on an internet petition

demanding that Mrs. May rescind her invitation for Trump to visit Queen Elizabeth II …

“The problem for May is that Trump doesn’t value relationships. He values strength and winning,”

said Jeremy Shapiro, the director of research at the European Council on Foreign Relations and a former senior State Department official.

“If you rush to the White House to offer a weak hand of friendship, you guarantee exploitation” …

The internet petition to Parliament calling for the cancellation of the invitation says the visit “would cause embarrassment to Her Majesty the Queen.”

By Monday evening in Britain, there had been more than 1.5 million signatures,

and some were enjoying themselves watching the numbers rise in real time.

At a large protest outside Downing Street, people urged May to cancel the state visit and said that

while relations with Washington were important, they should be cooler toward Trump …

On Monday, Downing Street insisted that the invitation stood.

But who knows how Trump will react?

The Mexican president, Enrique Peña Nieto, has had a similar experience to May’s — twice.

Last year, in the name of conciliation and dialogue, he invited Trump to Mexico,

a somewhat questionable move given Trump’s contempt for Mexico and

build (or finish) a border wall and make the southern neighbor of the United States pay for it.

The visit was widely viewed in Mexico as a national humiliation.

especially when Trump, in an immigration policy speech in Phoenix the same day,

insisted again that Mexico would pay for the wall.

Peña Nieto persisted after Trump’s election, apparently aiming, like May,

to influence the new president and to moderate what many hoped was just hyperbolic campaign talk.

But just before the two men were to meet in Washington,

Peña Nieto called off the meeting only when Trump threatened on Twitter to cancel it unless Mexico agreed to pay for the wall.

an act of defiance that provided a rare moment of public approval for the unpopular president.

But given the importance of bilateral ties, he did speak to Trump the next morning for an hour, without setting a new date to meet.

“This is neither a victory nor a defeat,” said Fernando Dworak, an analyst in Mexico City.

“It is the bell ringing in a boxing match.”

Prime Minister Shinzo Abe of Japan has the distinction of being among the first to feel the sting of Trump’s actions.

In a meeting in November in New York, Abe urged Trump, then the president-elect,

not to abandon a major trade deal, the Trans-Pacific Partnership.

One of Trump’s first actions in office was to abandon the deal,

which many considered a victory for China, even though the pact had already been blocked in the Senate.

Trump has long questioned the United States’ financial and military commitment to Japan’s security, and

he has criticized the automaker Toyota for planning to produce cars in Mexico.

An editorial in the Mainichi Shimbun, a center-right paper in Japan,

questioned why Abe was not taking a stronger stand against Trump:

who destroyed the trade accord — formed after nearly six years of arduous negotiations — on his fourth day in office.”

Given the stakes, Abe has refrained from open criticism of Trump and is scheduled to meet with him in Washington early in February …

In Canada, too, the prime minister, Justin Trudeau, has had his Trump moments.

Trump is deeply unpopular in the country,

proximity to America “is in some ways like sleeping with an elephant;

no matter how friendly or temperate the beast, one is affected by every twitch and grunt.”

So instead of provoking a fight, Trudeau moved swiftly to make contact with officials in the new administration and

reshaped his cabinet to promote ministers with experience in the United States.

Trump made problems right away for the Canadian leader by giving the go-ahead to the Keystone XL pipeline,

putting Trudeau in an uncomfortable position between environmentalists and oil producers.

If Trump goes after Canada on trade issues, as seems likely,

Trudeau is expected to become significantly more vocal and critical.

But to date he has avoided public criticism of the American president,

a reticence that may have helped over the weekend, after Trump’s executive order on immigration.

The Trump effect has been felt even in Australia,

where Prime Minister Malcolm Turnbull has come under criticism for

saying it is not his job to comment on the domestic policies of other countries.

Source: For Leaders of U.S. Allies, Getting Close to Trump Can Sting – The New York Times