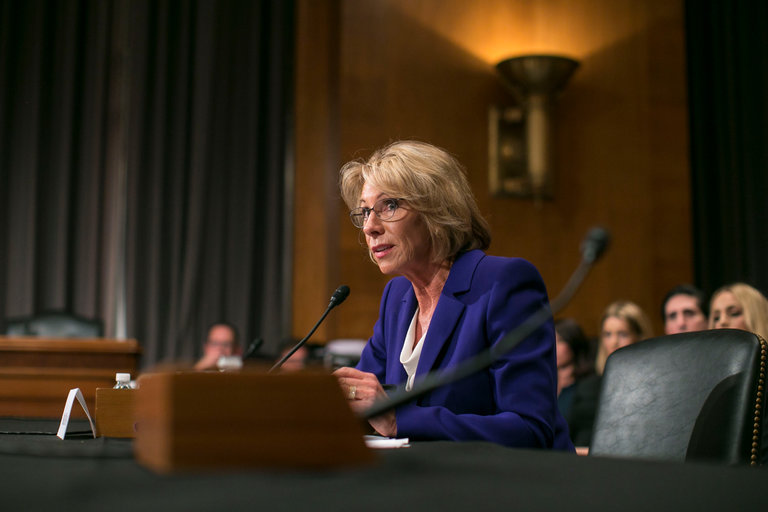 Her husband’s father founded Amway. Her brother started Blackwater, scandal-ridden private “security contractor” in Iraq. She won’t divest stock in company that could bid for Education Dept contracts. Conflict of interest ??? Corruption ??? How much money does she need ???

In an agreement with the Office of Government Ethics made public Friday,

DeVos said she had stepped down from the Neurocore board —

but that she would retain her financial interest in the company.

She valued that stake at $5 million to $25 million in her financial disclosure statement.

On Friday evening, as Democrats argued that the process had been rushed through,

without enough time to answer remaining questions about her financial disclosures,

he would delay the initial vote on Ms. DeVos’s nomination by a week, until Jan. 31 …

DeVos and her husband promote Neurocore heavily on the website for Windquest Group,

but he said the DeVoses would be better off selling their interests in the company.

“This is not an appropriate investment for the secretary of education,” Mr. Painter said in an email.

“How schools respond to attention issues is a vitally important policy question and ties right into achievement.

In my view, there should be support, including financial support,

for alternatives to A.D.H.D. drug treatments that are covered by health insurance whereas alternatives often are not covered.”

Consequently, he added, “The secretary would be barred from participating in that important policy decision

if she or her husband owned an interest in this company” …

In its marketing materials, Neurocore makes a direct pitch to parents,

featuring the personal stories of numerous children in YouTube videos and

offering tips on Twitter about helping students focus at school.

“Do you suspect your child may have teen ADHD? Check out these common signs” —

DeVos’s financial holdings may be the most complex by any of Trump’s cabinet nominees.

At 108 pages, her financial disclosure form is longer than the one Trump himself filed last year.

She and her husband, according to the disclosure filing, have $583 million to $1.5 billion in assets … “

Really — how much money DOES she need ???