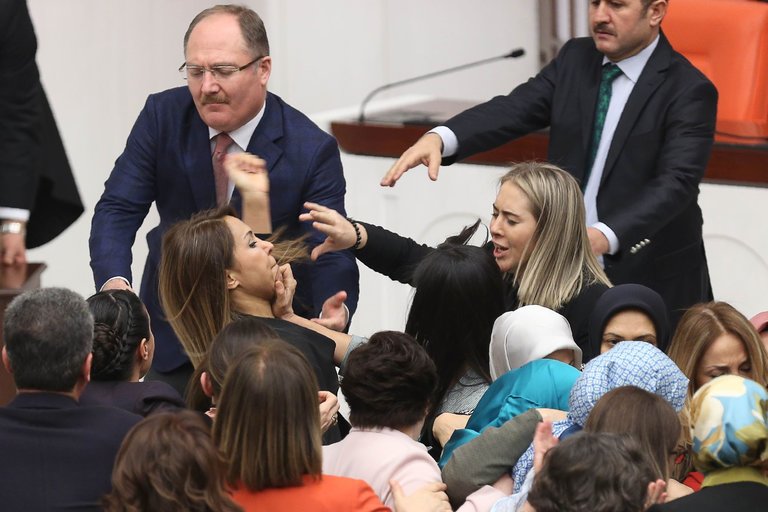 The proposed new Constitution, bitterly disputed by opposition parties, would greatly expand the powers of political Islamist President Recep Tayyip Erdogan, if approved in a referendum this spring.

“Turkey’s Parliament approved a proposed Constitution that would cede even greater powers to the country’s president if endorsed in a national referendum,

but the bitterly contested voting process was marred by screaming matches and physical altercations that sent at least three legislators to a hospital.

The low point came when supporters of the governing Justice and Development Party,

in an apparent attack on the floor of Parliament on Thursday,

knocked off the artificial arm of the opposition politician Safak Pavey.

A former United Nations diplomat, Pavey suffered injuries to the socket of her arm when the prosthesis was dislocated.

She had lost an arm and a leg in a train accident years ago.

The president, Recep Tayyip Erdogan, forged an alliance between followers of his party

and the far-right Nationalist Movement Party, or M.H.P.,

in an effort to gain enough votes to pass the new Constitution.

He succeeded despite bitter criticism by opposition parties and the pro-Kurdish Peoples’ Democratic Party, or H.D.P.

Many of H.D.P.’s legislators — including its co-leaders — have been jailed by Erdogan’s government on terrorism charges.

The proposed Constitution comes during a period of emergency rule, also approved by Parliament, in the wake of the failed coup attempt in July against Erdogan.

Since then, he has ordered the dismissal of 100,000 state employees and the jailing of more than 40,000 others suspected of supporting the coup.

He has also cracked down on the independent news media, jailing about 140 journalists in the past year,

with at least 81 still in prison last month, more than in any other country, according to the Committee to Protect Journalists,

Critics say the new Constitution will give Erdogan even greater powers than he already has, enabling him to invoke much more sweeping emergency rule measures.

The new Constitution would also allow a president to be the official head of his party, something not now permitted,

but it would limit the president to two terms …

Opponents say the new Constitution would allow the president to appoint Supreme Court judges and take control of the budget away from Parliament.

“This package is designing a regime according to the mood of one person. This is called dictatorship.”

Critics in Parliament say the jailing of at least 11 H.D.P. legislators, and the governing party’s insistence on late-night, marathon sessions,

has rushed through the new Constitution without time for the country to consider its provisions thoroughly.

Even with the missing H.D.P. members, Erdogan’s party did not have a majority to carry the vote, turning instead to the M.H.P. rightists.

The rightist party had previously campaigned for restoration of the death penalty,

which has been dropped as part of Turkey’s accession talks with the European Union.

The rightists would like to use capital punishment against Abdullah Ocalan, the imprisoned leader of the Kurdistan Workers’ Party, or P.K.K.

In the current debate, though, it has not raised that demand,

and there has been speculation that it will get a cabinet post as a reward for its support.

Passions have been high throughout the sessions in Parliament, with fistfights a regular feature.

The government’s own parliamentary television channel did not broadcast the sessions live, despite the importance of the debates,

but many of the members posted video feeds of the melees on social media.

In the session on Thursday, the violence broke out largely among female lawmakers.

It began when an opposition member, Aylin Nazliaka, handcuffed herself to the microphone on the lectern as a protest.

Lawmakers from the governing party then swarmed around her to remove the handcuffs, and in the ensuing struggle

a crowd of women could be seen on video punching, kicking and pulling one another’s hair.

During the altercation, Pavey’s prosthetic arm was dislodged, she fell and was later hospitalized.

Nazliaka was separated from the microphone, and she said her hand had been injured.

“They attacked all of us, blinded by anger,” Pavey said afterward.

“This assault shows a sample of what they will do to us after the constitutional amendment package passes.”

The debate on the Constitution comes at a time of high tension in Turkey.

Amid the crackdowns on Kurdish politicians and on followers of the exiled Muslim cleric Fethullah Gulen, whom the government accuses of staging the attempted coup,

there has been a series of high-profile terrorist attacks, including one on a nightclub on New Year’s Day, killing 39 people.

The governor of Istanbul, Vasip Sahin, said on Twitter that an assailant using a flame thrower on Friday attacked Istanbul’s Police Headquarters,

who was charged in the New Year’s nightclub attack and whom officials described as an Islamic State militant.

The assailant also attacked the nearby A.K.P. headquarters, the governor said.

No one was hurt.

In addition, Turkey is coping with millions of mostly Syrian refugees,

under an agreement with the European Union to prevent them from continuing to flood into Europe,

in exchange for billions of euros in European Union aid.

criticism from the European Union and has greatly set back Turkey’s hopes to join the bloc.

Erdogan has reacted to that criticism bitterly, threatening to break with the bloc and even restore the death penalty.

Voting on the new Constitution began Friday afternoon and extended into Saturday morning.

It was a lengthy process, although there was little doubt the measures would pass.

Turkish voters will vote on whether to approve the document in an April referendum, which is expected to be deeply divisive.”