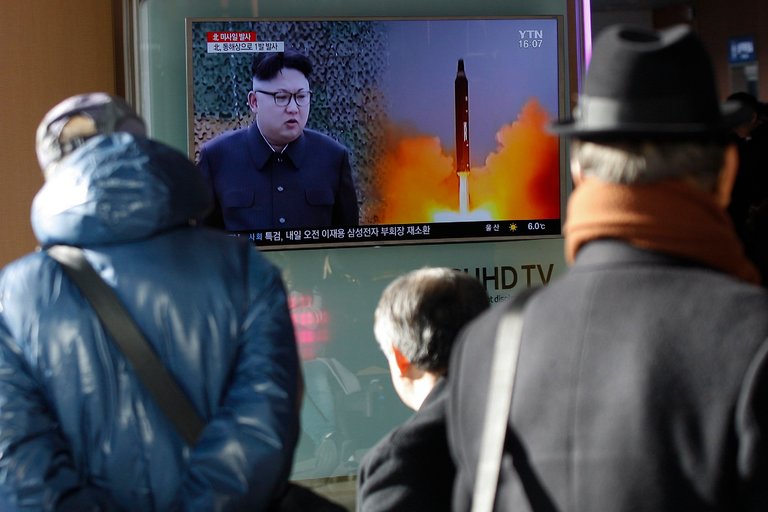 On January 4th, we observed that Americans were generally missing the point

when it came to North Korea and its pathetic, but dangerous, obsession with nuclear weapons:

who once again threatened that his country was on the verge of developing ballistic missiles capable of delivering a nuclear strike against the US.

As usual, Trump took the bait, and bit hard, saying that such a development “won’t happen !!!” —

a typically bellicose rejoinder that leaves unstated how, exactly, Trump intends to STOP such a thing from happening,

an ambiguity that understandably worried several experts on both North Korea and nuclear weapons generally,

who asked if Trump was planning to stop Pyongyang by force from developing those capabilities.

Regardless, both Trump and the bevy of appalled experts are missing the main point about North Korea nukes —

the danger is NOT from whether they can hit the US …

THIS is the real danger from North Korea to the US …

because ANY such use of nukes would raise the possibility of a US response, especially from a President Trump …

And since the ONLY possible rein on Kim Jong-un is China, one has to wonder if Trump has the slightest inkling that

We see no reason to change that view now …

Indeed, if anything, as we noted after Defense Secretary Jim Mattis’ trip to South Korea and Japan,

there is now even MORE danger of a scenario like this developing:

“Mattis emphasized that the US’ relationship with its East Asian allies has not fundamentally changed.

In Japan, that included assurances about Article 5 of the treaty,

which commits the United States to helping defend territory that Japan administers should it be attacked.

“Due to some of the provocations out of North Korea and other challenges that we jointly face,

as it was a year ago, five years ago, and as it will be a year and 10 years from now,” Mattis told Japanese Premier Abe …

where he sought to reassure officials that

the American commitment to defend their country,

particularly in the face of North Korea’s accelerating nuclear threat,

“Any attack on the United States, or our allies, will be defeated,”

“And any use of nuclear weapons would be met with a response that would be effective and overwhelming,” he added,

using a formulation that has been employed by previous Pentagon chiefs … ”

So people shouldn’t be so worried about North Korea developing an inter-continental ballistic missile, altho that is a real concern.

Instead, they should wonder what Trump’s America will do if — as is much more likely —

He vowed to stop the North from developing a nuclear weapon capable of hitting the United States. “It won’t happen!” he wrote on Twitter.

Appearing before cameras late at night on Saturday in Florida with his golfing guest, Prime Minister Shinzo Abe of Japan,

Trump read a statement of just 23 words that pledged American support for Tokyo — without even mentioning North Korea.

The muted comment stood in sharp contrast to his response after Iran tested a ballistic missile,

when he directed his national security adviser to publicly warn Tehran that he was “officially putting Iran on notice” and followed up with sanctions.

If North Korea was testing the new president, as many analysts believe, then Trump seemed intent on showing

he would not be baited into a confrontation every time an American adversary tried to provoke him.

At least not right away.

In his short time in office, Trump has shown that he can respond to events in measured ways one moment — and hotheaded bluster the next.

But even after waking up on Sunday morning, Trump chose to publicly feud with Mark Cuban, the owner of the Dallas Mavericks — rather than the maverick leader of North Korea.

“I assume they don’t have a strategy yet, so Trump with Abe by his side was properly taciturn, surprisingly so,”

said Jeffrey A. Bader, an Asia scholar at the Brookings Institution who served as President Barack Obama’s Asia adviser.

“But that can’t hold. At some point you need to articulate a strategy.”

The tempered response may also have reflected the fact that

the missile launched on Sunday by North Korea was either a medium- or an intermediate-range missile,

according to the American military, and not an intercontinental missile, or ICBM, capable of reaching the United States.

The missile flew 310 miles before dropping harmlessly into the Sea of Japan,

according to the South Korean military, which identified it as an intermediate-range Musudan.

but has boasted that it could test an ICBM “anytime and anywhere.”

The kind tested on Sunday poses a potential threat to American allies in Japan and South Korea and American forces in the Pacific, but could not strike the US.

“It’s yet unclear what missile was tested,” said Thomas Karako, a missile expert at the Center for Strategic and International Studies in Washington.

“What is certain is that North Korea has now begun 2017 by continuing the aggressive pace of missile testing they’ve shown in recent years.”

North Korea challenged Obama early in his tenure, too, with an underground nuclear blast four months after he took office.

The effect was to harden Obama’s attitude toward North Korea for the rest of his presidency, according to former aides.

Rather than try to negotiate, as both Presidents Bill Clinton and George W. Bush did,

Three weeks in office, the Trump administration is still trying to find its footing on foreign policy,

especially in areas like North Korea that have not been Trump’s main focus.

Secretary of State Rex W. Tillerson was sworn in on Feb. 1 and does not even have a deputy, much less a full team of trusted advisers, in place.

That North Korea’s latest test came while Trump was hosting Abe for a multiday set of meetings, meals and golfing,

first at the White House and then at Trump’s Mar-a-Lago estate in Palm Beach, Fla.,

was seen as no accident.

And it may be that Abe counseled Trump on his response.

In his own comments while he stood beside Trump, Abe called the launch “absolutely intolerable.”

but lamented that he did not mention South Korea at the same time.

“I was glad he issued the statement with the prime minister of Japan, but he ought to do it quickly with South Korea,”

“South Korea is probably more susceptible to North Korea’s virulence than any other country.”

Short of military action, the menu of options available for Trump is not significantly better than it was for his predecessors.

and have largely isolated North Korea from much of the world.

On his first overseas trip since taking office, Defense Secretary Jim Mattis visited Japan and South Korea to reassure them of America’s support

despite statements by Trump during the campaign that called it into question.

Most policy makers consider China crucial to any meaningful response to North Korea, given the nations’ extensive economic and political connections,

but it remains uncertain that Trump would have any better chance of persuading Beijing to take tougher action.

and promised to stick by America’s longstanding “One China” policy, reportedly at Tillerson’s urging.

But the president has been an unrelenting critic of China on trade and currency matters,

and some of his top advisers, including Stephen K. Bannon, his chief strategist, view China as a long-term adversary.

“We will learn an enormous amount about his policy and his administration by how he deals with North Korea,”

said Evan S. Medeiros, a managing director at the Eurasia Group and a former Obama adviser.

“It’s the land of really bad options, and the threat is only becoming more serious and the window is closing.

It will probably become the defining security challenge for the next president in Asia, if not globally.””