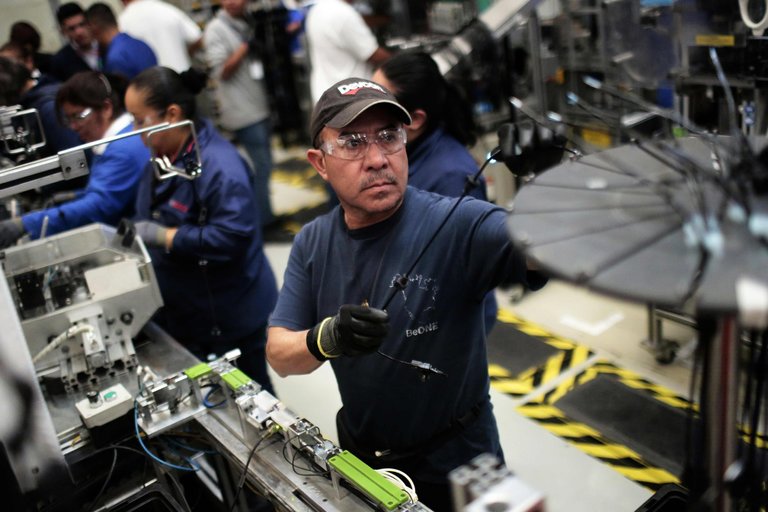 Workers this month on auto parts production line in Bosch factory in San Luis Potosí. Mexico’s most important strategic goal – deterrence. It must convince Trump that if he blows up NAFTA, the US will suffer too – including the end of a century-long peace on its southern border.

“How could Mexico inflict the most damage on the United States?

In normal times this question would not be top of mind for Mexican policy makers.

Mexican governments over the last quarter-century have consistently pushed back against the nation’s historical resentment toward the US,

hoping to build a more cooperative relationship with its overbearing northern neighbor.

But these aren’t normal times.

As President Trump prepares the opening gambit in his project to either renegotiate the North American Free Trade Agreement or pull out,

Mexico’s most important strategic goal is narrowing to one word:

It must convince Trump that if he blows up the trade agreement on which Mexico has staked its hopes of development,

by weaving its economy ever more closely into that of the United States,

the US will suffer, too.

The critical question is whether Mexico’s threat will be convincing …

Six million American jobs depend on exports to Mexico, according to Mexican officials …

negotiations for a future relationship with the United States would not be limited to trade.

“We will bring to the table all themes,” he said in a speech.

“Trade, yes, but also migration and the themes of security,

including border security, terrorist threats and the traffic of illegal drugs, weapons and cash.”

Will Mexico still cooperate in the fight against drug trafficking?

Will it stop foreign terrorists from using Mexico as a way station into the United States? —

Mexico can raise the stakes enough for Trump to reconsider his “America first” approach to commerce.

“Mexico has a lot of chips to play,”

said Jorge Castañeda, a former foreign secretary who has staked out a combative approach.

Let Trump pull the United States out of Nafta, he argues.

Instead of stopping Central American migrants at its southern border,

Mexico should let them through on their way to the United States.

“And let’s see if his wall keeps the terrorists out, because we won’t,” Mr. Castañeda added …

When Trump entered the presidential race in June 2015, a dollar was worth about 15 pesos.

A frontal confrontation with the United States might send it to 40, Mexican officials fear, fueling capital flight.

And yet that may be one of Mexico’s strongest cards.

As noted by C. Fred Bergsten, director emeritus of the Peterson Institute,

an irony of Trump’s approach to Mexico is that

by weakening the peso so much,

he is going to increase the bilateral trade deficit, increase Mexico’s competitiveness and

make it more attractive for American companies to invest there.

“That is going to swamp anything he achieves with his company-by-company efforts,” he added …

Mexico — its economy, its unpopular government, its public order and political stability — buckles.

The United States has enjoyed a peaceful southern border for 100 years,

since Pancho Villa made his marauding raids into the Southwest during the Mexican Revolution.

“That is worth pure gold in this and any other world,” Castañeda said.

“Mexico’s best argument is ‘Don’t mess with that.’”